Go deeper: Hurricane Florence is a storm threat unlike any other

Hurricane Florence is a nightmare storm for the Carolinas and Mid-Atlantic. The reasons stem from the hurricane's power, size, forward speed and the longstanding vulnerability of the area it is forecast to hit. Click here for the latest updates on the storm.

The big picture: There are no historical analogs to compare Florence to. Its forecast track is unprecedented, and its array and magnitude of threats are as well.

The context: If Hurricane Florence makes landfall in North Carolina (north of the border area with South Carolina, where Hurricane Hazel hit in 1954) or Virginia as a Category 4 storm, it would be the strongest storm to do so that far north.

Wind: The maximum winds in a hurricane tend to garner the most headlines, and for good reason — they cause significant, occasionally catastrophic damage. In Florence's case, the hurricane's slow, forward motion as it comes ashore raises the possibility that some areas could see an extended duration of hurricane-force winds, which would maximize property damage and infrastructure problems, particularly to the electric grid.

Surge, when a larger storm pushes more water toward the shore than a smaller-size storm of similar intensity: Florence's angle of approach to the coastline could act to maximize the surge potential, since it may approach at a nearly 90-degree angle, much like Sandy did in New Jersey in 2012. The surge from Florence could hit record levels of 15 to 20 feet or higher.

Inland flooding: An anomalously strong area of high pressure stretching out to the storm's north, over the western Atlantic, is what is forcing the storm to turn west, into the U.S. The same high pressure area is forecast to cause the hurricane to cross the coast and hit the brakes, to devastating effect. 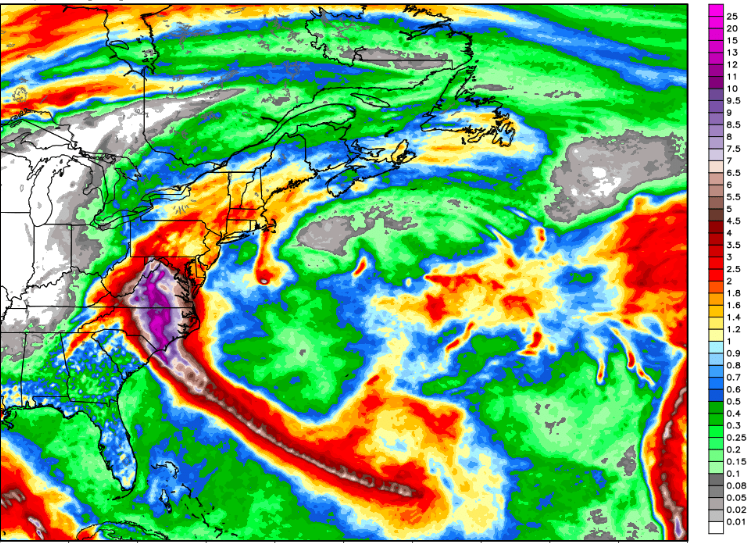 Total precipitation projection from the European model on Sept. 10, 2018, shown through Sept. 16. Scale is in inches. Photo: Weatherbell.com

The bottom line: This storm has serious potential to make it into the history books.

Editor's note: this story was updated on Tuesday to take into account the latest forecast information.