Axios AM: Mike's Big 6 — How Election Night could turn into a drawn-out battle — Iowa warning — Trump on Joe Burrow

No confidence in 2020 referees

Enemies with benefits: Trump and the NYT

On Twitter, Trump seems to have the most hatred for "the failing" New York Times. Since the inauguration, Trump has tweeted 6 different times, complaining about NYT's coverage of his presidency and repeatedly pointing out how they had to "apologize" for their bad coverage during the election. But it's not all hate; The Grey Lady and POTUS have a mutually-beneficial relationship...

How it works: Trump benefits from publicity, which he has used to build his brand and run a successful campaign, and the New York Times benefits from a fascinating character who drives readers, subscribers and clicks to their reporting.

Trump's secret love for NYT: Beneath Trump's outward anger towards The New York Times lies a need for their approval. Shortly after he was elected, Trump set up an editorial board meeting with NYT. That day, Trump tweeted twice about the "failing" New York Times. Not even 8 hours later, he told the editorial board that their paper was "a world jewel." At the meeting, Trump boasted to Times columnist Frank Bruni:

I'm going to get you to write some good stuff about me.

NYT's Trump benefits: Despite editorial disapproval, the paper has admitted that Trump has been great for business. The Times added 276k net new subscribers in the fourth quarter of last year, "buoyed by readers' intense interest in the presidential election." They made so much that the Times told reporters they would funnel the revenues into a program that would provide free subscriptions for underprivileged students.

As old as time: Remember, Trump's a New Yorker himself. He built his empire there, and it wasn't without publicity from the New York Times. Check out this headline from an '80s edition of New York Times Magazine. 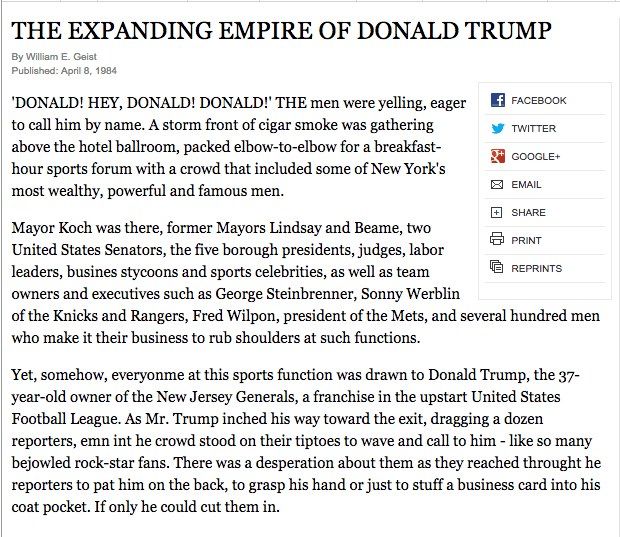 Editor's note: This article was updated to specify that Trump's quote was to NYT columnist Frank Bruni. It also adjusted the subscriber growth numbers from the post-election total announced in late November to Q4 overall.