Warren-Zuckerberg feud intensifies ahead of 2020

The battle between Facebook’s chief executive and one of the top 2020 Democratic candidates for president is escalating as the election inches closer.

Our thought bubble: Sen. Elizabeth Warren and Mark Zuckerberg are convenient political targets for one another. Warren can paint Facebook as an example of capitalism gone wild, while Facebook can point to Warren as a misguided regulator who wants to break up its business because she doesn't understand how it works.

Driving the news: On Saturday, Warren tweeted that her campaign created a Facebook ad with false claims — namely, that Zuckerberg had endorsed President Trump for re-election — and submitted it to Facebook "to see if it’d be approved." It was. 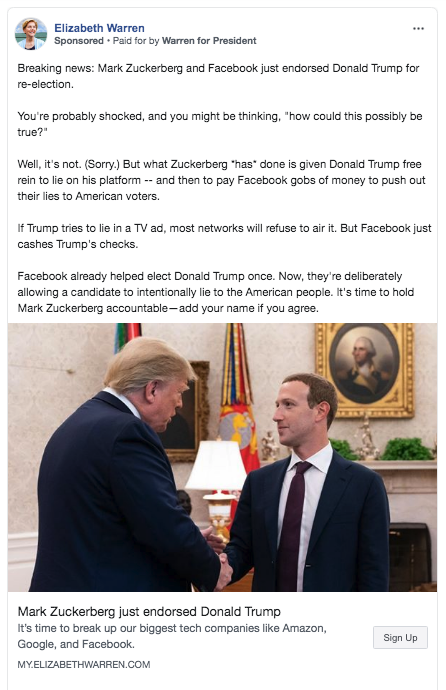 Facebook has been under pressure over the past week from activists that argue it shouldn't allow politicians to be exempt from its fact-checking policy for ads.

Be smart: The political ad saga has ignited backlash from Democrats who argue that Facebook is unfairly helping conservatives by allowing them to run false claims in their advertising.

The big picture: The false ad spat was just the latest tit for tat in a growing battle between Zuckerberg and Warren, which has mostly been escalated by Warren.

The bottom line: Even though political ads reportedly make up less than 5% of Facebook's revenues, the company has chosen to engage in political advertising because it falls in line with its mission of empowering free speech.