Welcome back to Future. Thanks for subscribing.

Consider inviting your friends and colleagues to sign up. And if you have any tips or thoughts on what we can do better, just hit reply to this email or shoot me a message at [email protected].

1 big thing: When scientists get overloaded

Science is moving at a dizzying pace: around 2.5 million scientific journal articles are published a year around the world, and still the volume keeps climbing. But rather than propel science at an increasing clip, the flood has created information overload — and that threatens to hold back progress.

Axios' Kaveh Waddell writes: Much of what scientists do is read each others’ work — for the day’s trends, techniques, and outstanding questions. But the sheer volume means no one can read all the relevant work. Nor can anyone realistically find only the best papers.

This sets up an impossible choice, says Doug Raymond of the Allen Institute for Artificial Intelligence: A scientist can take the time to understand where her field stands, and risk getting scooped, or publish fast with possibly only incremental results.

So several new projects are using AI to cast a wide net — searching the internet to sift out interesting scientific papers that may otherwise be buried.

By turning away from the traditional peer-review system, these new projects reward research that sparks online buzz, and is verifiable by other scientists.

But, but but: The rigors of peer review can’t be replaced by 240 characters, and social media can be as much of an echo chamber as the ivory tower.

Across the globe, democracy appears to be on the wane and strongman-led populism on the rise. But while the direction is authoritarian, it does not necessarily mean dictatorship everywhere.

What's happening: The sharp turn to authoritarian politics appears to reflect the re-emergence of conservative forces buried by the post-Soviet democratic wave. "All the momentum is with the populists and nationalists right now," Ian Bremmer, president of the Eurasia Group, tells Axios.

But authoritarianism comes in different shades, says Dan Slater, the head of the Center for Emerging Democracies at the University of Michigan, who writes about the issue in a new piece at Foreign Affairs.

The U.S. has taken on characteristics of both, Slater tells Axios: With his attacks on the Fed, courts, generals, intelligence agencies, other politicians and the media, President Trump behaves like an illiberal democrat.

And the U.S. has allowed an electoral authoritarian dynamic to take hold with the electoral college, which twice in the last two decades has allowed presidents to take power with a minority of the votes. "As soon as it becomes systematic that one party can win the entire executive branch with fewer votes it is a loser-take-all system," Slater said.

3. What you may have missed

The week got away from you? No worries. Catch up on the best of Future:

2. The uprising for higher wages: Cities are stepping in when companies won't

3. When markets and government fall short: Voters take charge of the economy 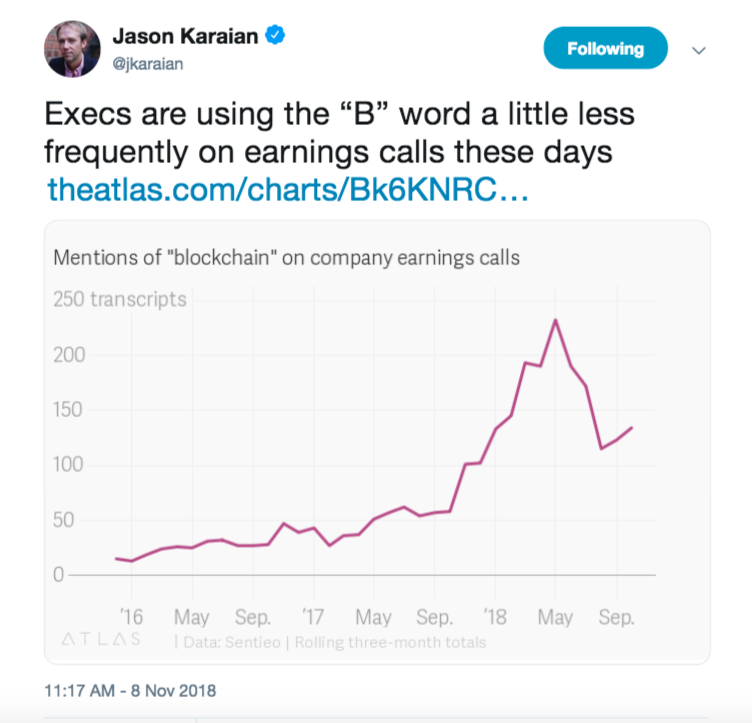 Corporate America's latest buzzword may already be nearing the end of its life span: Blockchain is on fewer and fewer tongues.

For the last several months, touting a "blockchain initiative" was the new cool thing. But in a perusal of earnings calls, Quartz' Jason Karaian tweets that he is hearing the word less and less.

What's happening: It turns out that few of the big companies were actually working on the long-term, world-changing blockchain-based projects that they were suggesting.

What's next: We don't know. Send along your candidates for the next buzzword.