This site uses cookies to enhance your reading experience. By using this site, you consent to our use of cookies.Okay
Vitals
By Sam Baker

🚨 Breaking news: Axios and HBO have inked a deal for a second season! Broken into 8 half-hour episodes — 4 this spring and 4 this fall — AXIOS will cover the big trends, people and ideas shaping the next decade.

Seven pharmaceutical CEOs will face off against the Senate Finance Committee today in what could be the beginning of a bipartisan push to reduce drug prices.

What we're watching: Pharma would rather not be here, but if there's a silver lining for the industry, it's that this hearing — with 7 drug companies and no one else — is a pretty big platform to try to shift the blame to pharmacy benefit managers. 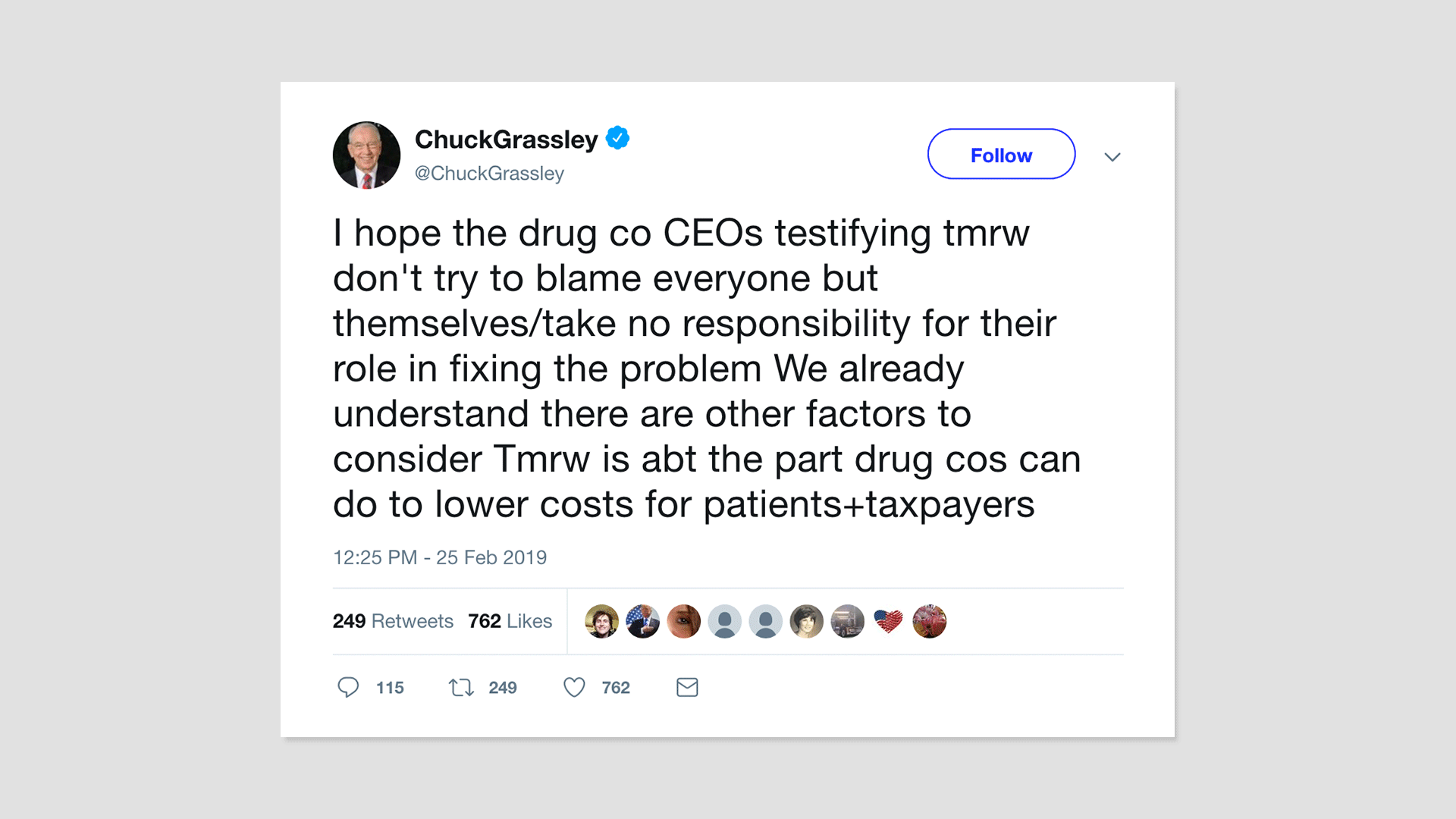 The big picture: Pharma is weaker on Capitol Hill right now than it has been in a very long time, and President Trump's willingness to take on the industry has frayed drugmakers' usual alliances with the GOP.

Yes, but: Let's not get ahead of ourselves.

PBMs will likely be taking it on the chin during today's hearing — and, as my colleague Bob Herman reports this morning, they're already not having a great 2019.

CVS Health rolled out profit estimates for 2019 that were well below what Wall Street had expected, due in part to its PBM proactively passing more rebate dollars to employers and insurers.

Cigna CEO David Cordani recently said the Trump administration's proposed rebate rule would "not have a meaningful impact on our growth or earnings trajectory," even now that the company has acquired Express Scripts.

Diplomat Pharmacy lost a lot of employer customers within its recently acquired PBM business, and it anticipates writing down a "significant portion" of the PBM's $630 million value.

Magellan Health owns a PBM with $2.5 billion of annual revenue, but activist investor Starboard Value is breathing down the neck and is encouraging a sale due to the company's "poor performance."

That's not all: States continue to be the most aggressive force challenging PBMs.

3. Google AI is now in clinical use

Google — along with its health care-focused sister company, Verily — has taken an artificial intelligence tool out of the lab and into real doctors' offices.

Why it matters: So far, AI tools in the health care world have mostly been useful for things like quickly reading and synthesizing a lot of medical literature — a few steps removed from clinical practice. Using a system like this for actual treatment is a big jump.

How it works: Google and Verily are using this tool in India to help diagnose 2 diabetes-related eye conditions that can cause blindness if left untreated.

4. FDA will reevaluate long-term opioid use

The Food and Drug Administration plans to require more research about whether opioid painkillers are safe for long-term use.

Between the lines: Former FDA commissioner David Kessler said on "60 Minutes" this past weekend that the agency made a mistake when it approved opioids like OxyContin for long-term use, because it didn't have enough scientific data to support that decision.

Anthem’s general counsel told a judge yesterday that Cigna "cut us off at the knees," sabotaging the proposed merger between the two insurers, Bloomberg reports.

What they’re saying: The nearly $50 billion merger would have involved Anthem buying Cigna.

The other side: Cigna has accused Anthem of using the merger to steal sensitive information and customers.

Newly empowered Democrats are looking to roll back some of the restrictive Medicaid policies Republican governors have implemented or set in motion. Here's a roundup, from the Center on Budget and Policy Priorities:

Why it matters: Medicaid work requirements are the most substantive change the Trump administration has made so far to health care coverage. But pushback from Democrats — and potentially the courts — could limit the reach of that change.

News you can use: "Dark energy might be getting stronger and denser, leading to a future in which atoms are ripped apart and time ends." Have a nice day, I guess, and send me your tips/theories about the end of time: [email protected].