Happy Friday! The Earth moves at 19 miles per second. Assuming you just took three seconds to read this, you are now 57 miles away from where you were when you started.

Moving from astronomy to sports...

1 big thing: 🏀 The next two months will determine the NBA's next decade

When the Lakers were officially eliminated from the playoffs weeks ago, it brought to the forefront the idea that, while LeBron James is still the face of the NBA, that won't be the case forever.

Why it matters: LeBron's absence is one of many "changing of the guard" storylines heading into the 2018-19 NBA playoffs, making the next two months both exciting and consequential.

The bottom line: This summer will mark the end of one era and the beginning of another — and the playoff performances of a handful of teams will dictate just how far that pendulum swings.

Go deeper: The story of the NBA regular season in nine charts

There are endless storylines surrounding every NHL playoff series, but instead of listing off each one, let's put a few bigger picture ones on your radar.

1. Best team ever? The numbers place the Tampa Bay Lightning in the conversation for best regular-season team ever. They won 62 games for crying out loud, which is something only one other team has ever done (1995-96 Detroit Red Wings).

2. Canada's Big 3: The Stanley Cup, which originated in Canada, hasn't been won by a team from the Great White North since Montreal took it home in 1993. That's 26 years ago!

3. Hero/villain: In his first full season as owner, Tom Dundon helped the Carolina Hurricanes make the playoffs for the first time since 2009. So, in Raleigh, he's somewhat of a hero.

3. ⚾️ How much your favorite baseball team is worth

The average Major League Baseball team is worth $1.78 billion, according to Forbes, an 8% increase from last year. Additionally, all 30 franchises are worth at least $1 billion; whereas just 10 years ago, only two were (Mets and Yankees).

The big picture: This is Forbes' 22nd time doing this. Over that span, the average MLB team value has increased 11% year-over-year, while NBA and NFL team values have increased 13% and 12%, respectively.

What's next: These increases are only going to get bigger in 2022 when MLB's seven-year, $5.1 billion deal with Fox kicks in.

P.S. ... In other baseball news, Ozzie Albies' new deal with the Braves might be the worst contract ever signed. Not hyperbole.

"Brains and brawn share the top spot on the leaderboard heading into the second round of the 83rd Masters," ESPN's Mark Schlabach writes:

Big names: Tiger Woods, Rickie Fowler, Francesco Molinari and Jason Day are tied for 11th at 2-under … Bubba Watson is tied for 29th at even par ... Rory McIlroy, Patrick Reed and Justin Thomas are tied for 44th at 1-over … Justin Rose and Jordan Spieth is tied for 63rd at 3-over.

Best story: Canada's Corey Conners (-2) was the final player invited to the Masters after winning last week's Valero Texas Open. He flew in on Sunday night, took Monday off and then practiced Tuesday before shopping for clothes.

5. 🏒 UMass vs. Minnesota Duluth for all the marbles 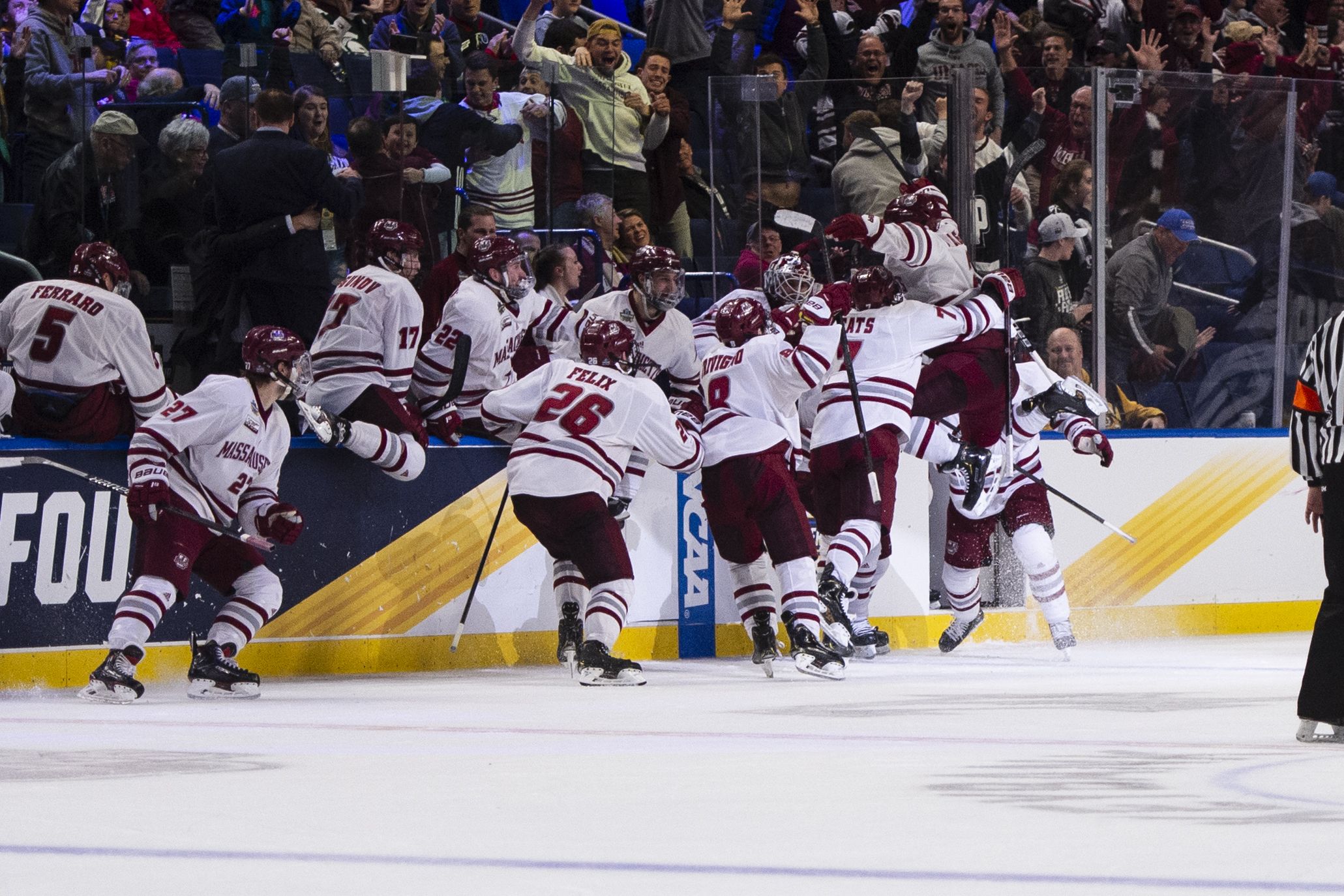 Massachusetts 4, Denver 3 (OT): Freshman Marc del Gaizo scored on a slapshot from the top of the circle with 4:42 left in overtime to send UMass to its first-ever national championship. 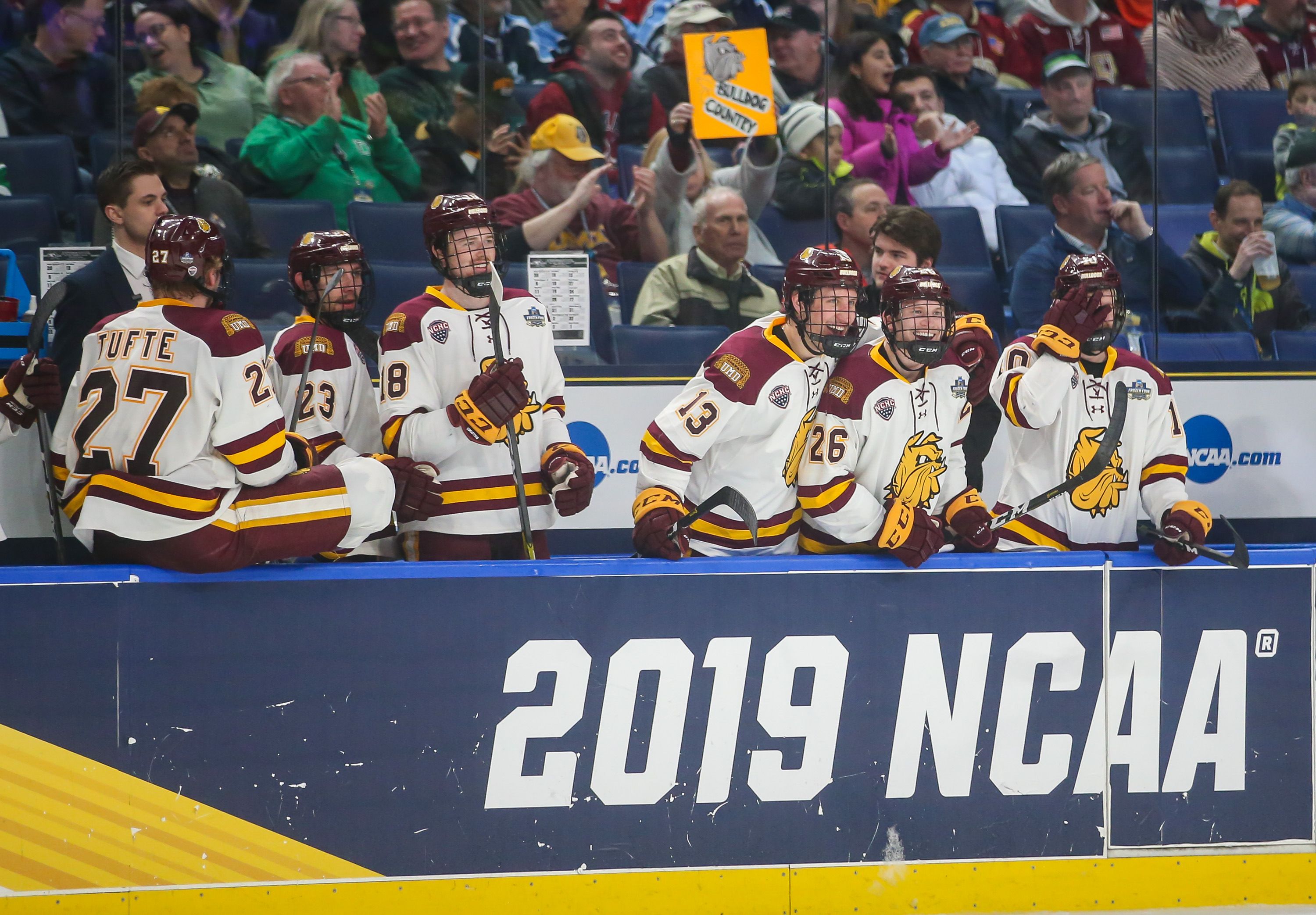 Minnesota Duluth 4, Providence 1: Justin Richards scored twice for the defending champion Bulldogs in a game that was much closer than the score would indicate (two empty-net goals).

What's next: The championship game is Saturday at 8 pm ET (ESPN2).

The big picture: In response to the boycott, the Soviet Union counter-boycotted the 1984 Summer Olympics in Los Angeles before eventually returning to Olympic competition in 1988.

8. The Ocho: The toughest cross country race in the world

"World Cross Country (WXC), held March 30 in Aarhus, Denmark, has a reputation as the toughest race in the world, losing masses of the best runners ... on long kilometers of grass, mud, water, sand, snow, all tilted and twisted at unfriendly angles," Deadspin's Sarah Barker writes:

Worth clicking for the photos

Today's contest will be held within The Action Network app.