Greetings from NYC, where I'm excited to spend some time with the Axios team that this morning launched our daily Markets newsletter (check out out). Okay, here we go...

Apollo Global Management is positioning itself to dominate the early 2019 private equity market, with others watching closely to see if it can get big deals over the finish line.

But Apollo's big hurdle could be debt.

The Arconic deal was, by all accounts, supposed to be announced last month. Part of the holdup relates to potential liabilities from the fire at London's Grenfell Tower, but the NY Post's Josh Kosman reports that Apollo's real problem is finding enough lenders during what has become a pretty severe credit crunch in the high-yield markets, where new corporate issuance fell to barely a trickle in November and December.

"The leveraged loan market is experiencing similar outflows to the S&P
500 index, which has plunged 15% since its Sept. 21 apex. Less
leverage for buyouts means fewer public companies will be taken private,
and those that do will attract lower prices."

The bottom line: So goes Apollo, so may go the rest of private equity in the first half of 2019. Not only for take-privates, but also secondary buyouts in which companies are sold from one private equity firm to another. And it all comes against a backdrop of growing macro concern, led by ex-Fed chair Janet Yellen, that there the past few years has seen too sharp an increase of leveraged lending with "a significant weakening of underwriting standards."

• Breaking bio: Eli Lilly this morning said it will buy Loxo Oncology for around $8 billion in cash, or $235 per share (68% premium to Friday's close).

• Venture GO: Niantic, maker of the Pokémon GO mobile game and upcoming Harry Potter game, disclosed in an SEC filing that it raised $190.55 million in Series C funding. This follows a WSJ report from mid-December that the company was raising $200 million at a $3.9 billion valuation.

🎧 Pro Rata Podcast: Our latest episode digs into the idea of a Green New Deal. What it is, if it's viable and how it might play in the 2020 presidential race. Listen here.

🚑 Atlantic Therapeutics, an Irish maker of garment-based devices for treating the cause of bladder leaks, raised €28 million in Series B funding. LSP led, and was joined by Andera Partners, Seroba Life Sciences and Earlybird VC. www.restorethefloor.com

• FullBeauty Brands, a New York-based apparel retailer for plus-sized women, said it will file for bankruptcy protection later this month. The move would result in company control being transferred from private equity firms Apax Partners and Charlesbank Capital Partners to a group of creditors led by Oaktree Capital Management. http://axios.link/dFaM

🚑 Vatica Health, a Miami Beach, Fla.-based portfolio company of Great Hill Partners, acquired the technology of CareSync, a chronic disease management software company that went out of business easier this year after raising more than $50 million from firms like Tullis Health Investors and Greycroft. www.vaticahealth.com

🚑 Poseida Therapeutics, a San Diego-based gene editing startup focused on CAR-T immunotherapies, filed for a $115 million IPO. It plans to trade on the Nasdaq (PSTX), with Citi as lead underwriter. The company has raised around $72 million in VC funding from firms like Malin Corp. (33% stake), Longitude Venture Partners (7.7%), Vivo Capital and the Tavistock Group. www.poseida.com

• Super League Gaming, a Santa Monica, Calif.-based amateur esports community and content platform, filed for a $25 million IPO. It plans to trade on the Nasdaq (SLGG) with Northland Capital Markets and Lake Street as lead underwriters, and reports less than $1 million in revenue for the first nine months of 2018. www.superleague.com

• Starboard Value acquired a 1.7% stake in discount retailer Dollar Tree (Nasdaq: DLTR), and is calling for a sale of its Family Dollar unit. http://axios.link/gYeQ

🚑 Takeda Pharma’s (Tokyo: 4502) said the drugmaker is unlikely to sell its over-the-counter business, despite some pressure to do so as it completes its $59 billion buyout of Shire. http://axios.link/4UVd

• Temasek is seeing to sell part of its 24.9% stake in A.S. Watson, a Hong Kong-based beauty and health retailer owned by CK Hutchison, per Reuters. http://axios.link/GSyG 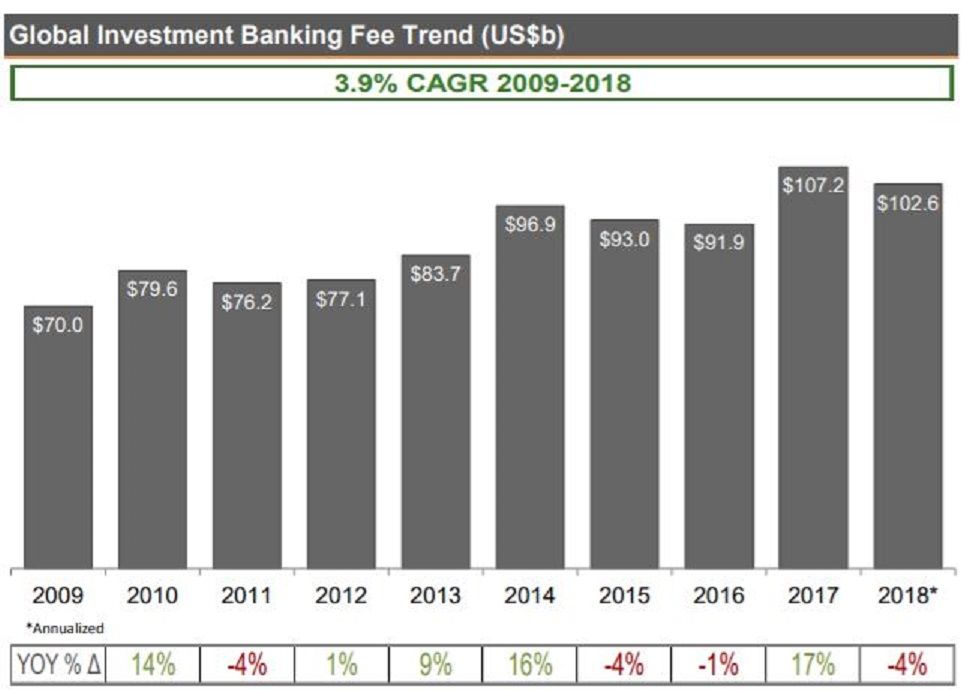 More from the Refinitiv investment banking report, out this morning: