Good morning and welcome back! Was this email forwarded to you? Sign up here

And happy birthday to Sade, who brings us today's intro tune...

Acting EPA chief Andrew Wheeler will appear before the Senate's environment panel this morning as lawmakers vet his nomination to formally get the job. But he might not be the only one trying out.

What we're watching: The hearing will be a high-profile chance for lawmakers to grill the EPA boss on controversial policies, like the proposal to replace Obama-era climate rules.

Senators running or weighing the race, who are on the panel, include...

Why it matters: This committee could become the panel to watch, especially if more of its members follow Gillibrand into the race. 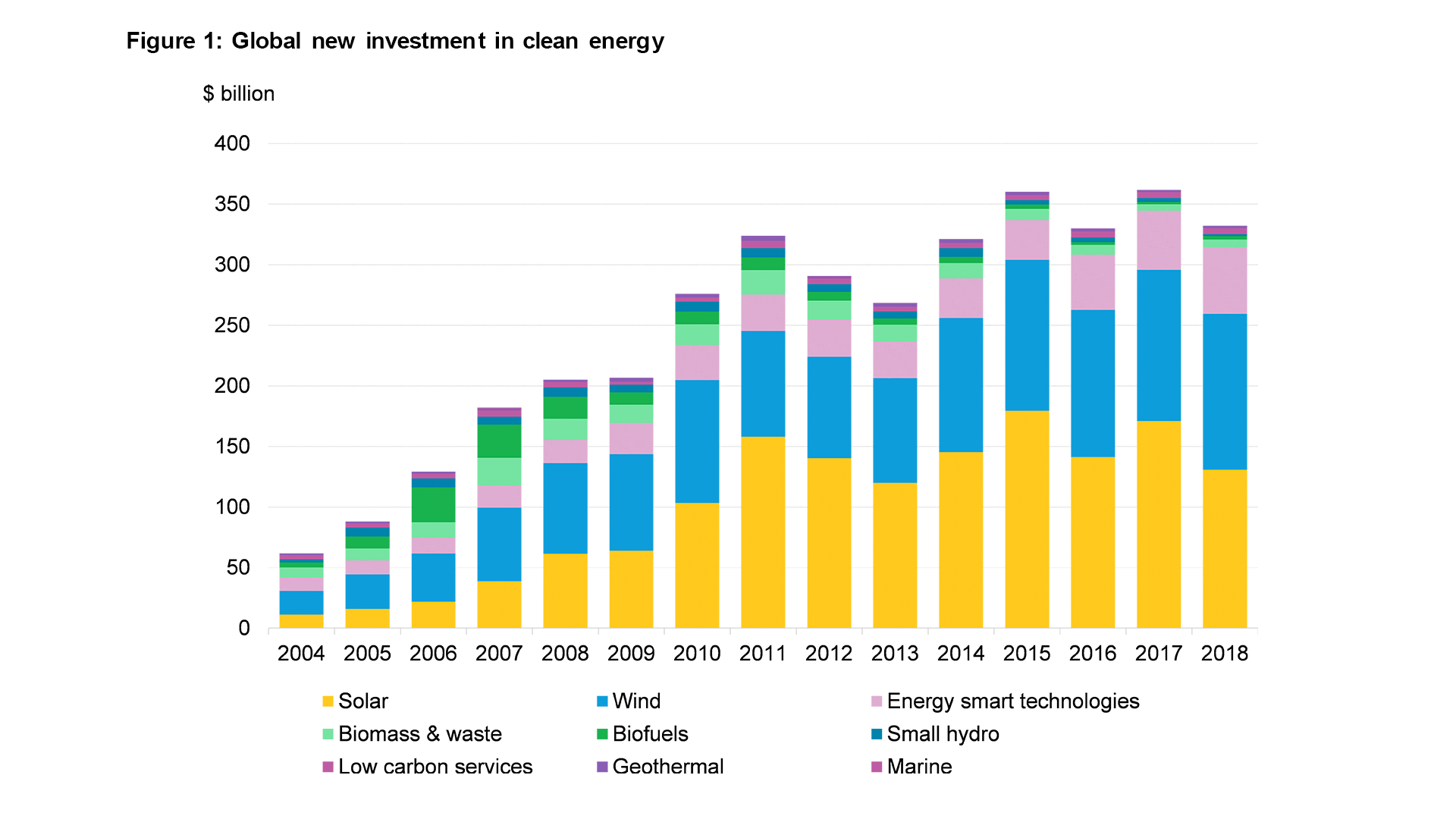 Worldwide investment in renewables and other low-carbon energy sources dipped 8% last year to $332 billion, according to the consultancy BloombergNEF.

Why it matters: New year-end data show that the decline was driven by a sharp 24% drop in spending on solar projects, driven by 2 forces...

What they're saying: In an accompanying statement, BNEF analyst Jenny Chase notes that 2018 was a "difficult year" for panel manufacturers and developers in China, but adds...

"However, we estimate that global PV installations increased from 99GW in 2017 to approximately 109GW in 2018, as other countries took advantage of the technology’s fiercely improved competitiveness."

The big picture: Worldwide investment in clean energy has soared over the past 15 years from less than $62 billion in 2004 to consistently far above $300 billion over the last half-decade.

By the numbers: A few other snapshots of the global picture... 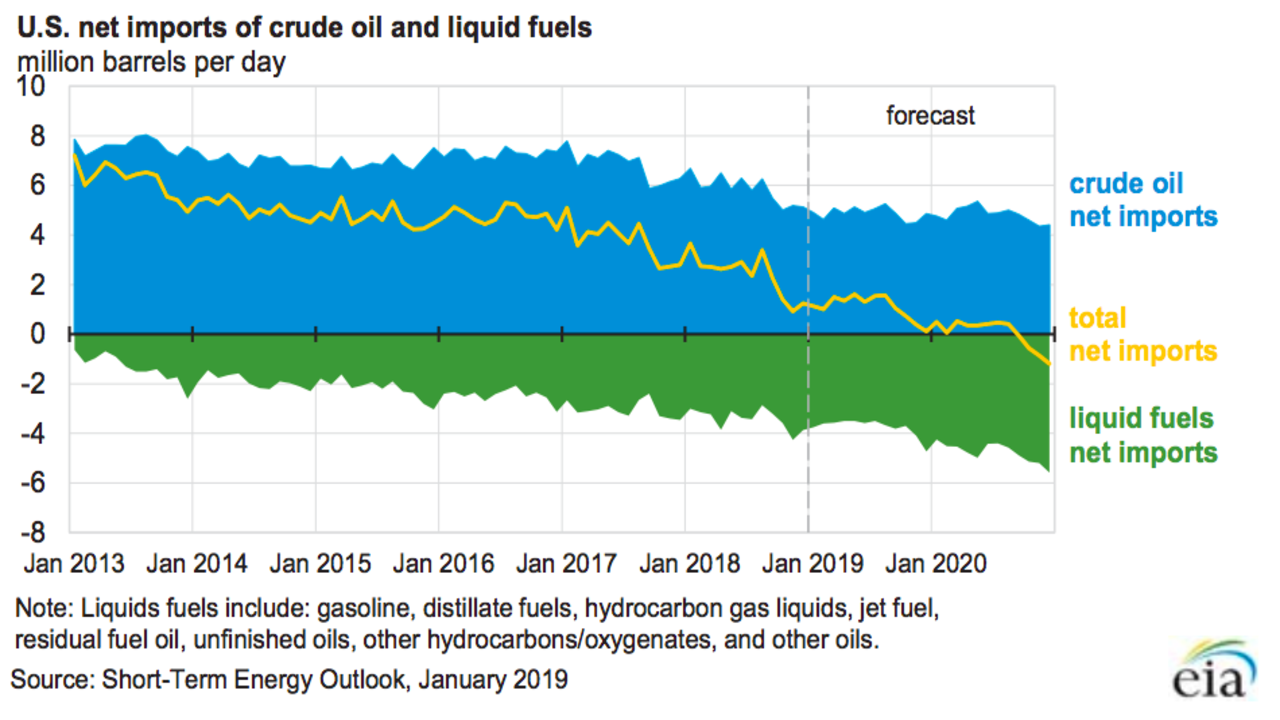 Remember that brief moment in late 2018 when the U.S. became a net exporter of crude oil and petroleum products combined?

What's next: "EIA forecasts that net imports will continue to fall to an average of 1.1 million [barrels per day] in 2019, and to less than 0.1 million b/d in 2020," per EIA's outlook published Tuesday.

Why it matters: That factoid is a sign of the country's re-emergence as a global oil powerhouse and increasingly prominent exporter as domestic production has surged.

What they're saying: "Steady growth from non-OPEC countries, including the United States, headlines the forecast for global crude oil production through 2020. We expect the United States to remain the world’s largest producer," EIA administrator Linda Capuano said in a statement alongside the the report.

But, but, but: Here is where I'm contractually obligated to note that the U.S. will still remain very tethered to the whims of global markets, and net exports doesn't — and, logistically, shouldn't — mean the country won't still import lots of crude.

Why it matters: This is a classic example of business using regulation to gain a competitive edge over others.

Details: The Coalition for American Energy Security launched Tuesday. Although the organization doesn't have a website yet, it has the following members and plans to grow further...

The big picture: The global standards are forecast to increase prices of diesel, gasoline and oil in the coming years, according to an EIA analysis Tuesday.

Policy: The Interior Department is bringing back dozens of employees to work on offshore drilling policy efforts during the shutdown, including plans to make more areas available for leasing, according to several reports. Per The Hill...

EPA's plan to regulate carbon dioxide from coal-fired power plants would lead to CO2 emissions increases as high as 9% in 18 states in 2030, despite driving a modest nationwide cut, a new paper in the journal Environmental Research Letters concludes.

Why it matters: In an accompanying blog post, two of the authors, both from Resources For the Future, argue that the findings highlight a legal vulnerability in EPA's Affordable Clean Energy (ACE) rule...

"Our new study ... calls into question whether the ACE rule can meet the legal requirement of a best system of emission reduction under the Clean Air Act given that it is projected to cause an increase in CO2 emissions at 28 percent of the regulated plants."

The big picture: The Trump administration proposed the rule in August to replace a more sweeping Obama-era climate regulation that never took effect. But the study projects that its push for greater coal-plant efficiency could lead to a "emissions rebound effect" that boosts overall CO2 and conventional pollution from some power stations.

The bottom line: From the underlying paper...

"Although the ACE reduces the emissions intensity of coal plants, it is expected to increase the number of operating coal plants and amount of coal-fired electricity generation, with 28 percent of model plants showing higher CO2 emissions in 2030 compared to no policy."

"We also find that the ACE increases SO2 and NOX emissions in nineteen states and twenty states plus DC, respectively, in 2030 compared to no policy, with implications for air quality and public health."

And a couple more notes on climate politics and the Green New Deal...

What they're saying: The new episode of Energy 360°, a Center for Strategic and International Studies podcast, explores why some activists aligned with the GND movement are not emphasizing carbon pricing.

Over at Vox, David Roberts suggests a truce in the debate over a goal of 100% renewable power (one rallying cry of GND backers) vs. 100% carbon-free power. He writes...

"If environmentalists believe that renewable energy will triumph in the end, they lose nothing by allowing the GND to simply target 'carbon-free energy.' In practice, that will prove to be renewables, right? So what’s the problem?"

In the states: Greentech Media reports on another sign of the rising cachet of the Green New Deal tag, which of course isn't a trademark and can mean whatever a given backer wants.