Welcome from Beijing. I'm writing Future from China this week. Let me know what you think as we go.

Meanwhile, thanks for subscribing. Consider inviting your friends and colleagues to sign up. I'd love to hear your ideas of what we ought to cover, are getting wrong, or anything else you care to share. Just hit reply to this email or shoot me a message at [email protected]. Let's start with ...

China was already building the largest single infrastructure project since the Marshall Plan — the Belt and Road Initiative, echoing planet-spanning 19th and 20th century initiatives by the British and then the United States to set the rules for global commerce.

But now Beijing is looking to amplify its reach far beyond what the U.K. and the U.S. accomplished in their respective heydays. Among its additional plans:

These massive new projects, costing billions of dollars and built alongside Belt and Road, will unfold over decades. But they already paint an even starker picture of an ultra-powerful China at the center of economics and — by extension — politics:

The digital highway would be "a community of common destiny in cyberspace," a vice minister of information technology told the Economist. The super-grid is even more ambitious, relying on a technology called ultra-high-voltage transmission to transport electricity along vast distances, from continent to continent, according to Andrew Davenport of RWR Advisory, a consultant firm.

Go deeper: Read how Belt and Road has spooked China's rivals; how Malaysia is reconsidering projects brought by Beijing; and the mountain of debt taken on by Sri Lanka.

2. "They believe the West is in free fall"

Chinese leader Xi Jinping and Russia's Vladimir Putin are strategizing how to reposition themselves for a new, more powerful future amid a rapid deterioration of the U.S.-led global order.

What we're hearing: Xi and Putin, meeting Friday in Beijing and again yesterday in the city of Qingdao, don't appear to think they have the cachet — even combined — to create an entirely new system. Nor is it clear that at the moment they would want to trash the U.S.-led institutions that have anchored the global economy and political order since World War II (see below).

But look for the mutually distrustful pair to feel out ways to transition to a new world in which a loose grouping of China, Russia and their allies can become more or less the geopolitical equals of the West.

"We’re descending fast into a Hobbesian world. Only the US think tank community believes it can restore the liberal rules-based order: Such grand illusions!"

How this new world might look: As discussed above, China's long-term vision is a world structured within its various big infrastructure initiatives. But Ian Bremmer, president of Eurasia Group, tells Axios that he does not see Xi and Putin for now attempting to replace the post-war multilateral architecture.

For years, an unwavering certitude of industry, think tanks, demographers, policy-makers and city planners everywhere has been that humanity, led by millennials, is moving to the city: We just needed to figure out how to house, employ and feed everyone in a condensed space.

Yes, but: As more and more millennials marry and have children, that presumption is coming under scrutiny.

What's happening: The forecast of global massive urbanization was important since it suggested that vast swaths of countryside would empty out, and we would adopt entirely new lifestyles.

What happened: Frey said it might be "just a 'return to normal' of the suburbanization we saw prior to the Great Recession." But Karen Harris, managing director at Bain Macro Trends, tells Axios that, for one thing, it's probably time for millennials — given their stage in life — to start moving out to the 'burbs with their kids.

That piqued the interest of Jed Kolko, chief economist at Indeed, who emailed Swan and me saying he had looked at recent county-level employment data, and combined that with 2016 presidential voting patterns. "Here's the outcome," Kolko writes:

The bottom line: "Even places that voted most strongly for Trump are primarily service-producing, not goods-producing, economies."

5. Worthy of your time

6. 1 puppy thing: When your daughter prevails

Back in March, the canine longings of an 8-year-old Maryland girl became a Twitter sensation. As Brendan Greeley's daughter told him in very plain capital letters across his morning FT, she wanted a puppy. Some 189,000 people sympathized when Greeley tweeted about it, among them writer J.K. Rowling and "The Wire" creator David Simon.

So it is that, three months later, Greeley wears his long shirt sleeves rolled up near the elbows to let the air heal the bloody scratches and digs inflicted by JK Growling, the new family puppy. 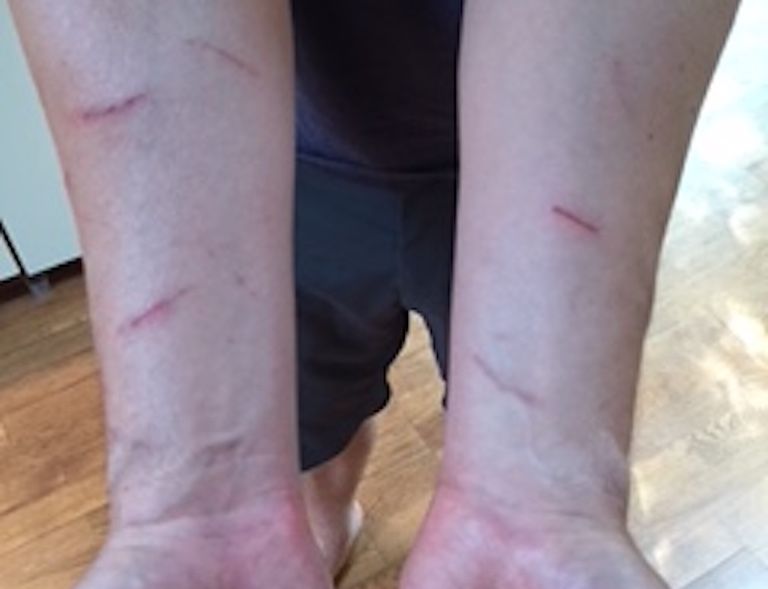 These wounds are part of diverting Growling's alpha instinct: Greeley and his wife Beth are attempting to teach their children how to let the pup know he isn't leading this particular pack. "He's aggressive," Greeley told me.