Situational awareness: 463 migrant parents may have been deported without kids from whom they were separated when they entered the U.S. illegally, according to a joint court filing on Monday by the federal government and the ACLU. (Reuters)

Democrats' chances of winning the House are rising, thanks to a rapidly expanding number of GOP-held seats in play, Axios' Alexi McCammond reports:

David Wasserman of the Cook Political Report recently moved 11 races toward Democrats, and tells us he sees a “blue wave” on Election Day, driven by suburban professionals.

Why it matters: The broad trend lines are bad for Republicans.

Be smart: Republicans count on the strong economy, and could be helped by a lack of excitement among millennials and Hispanics.

Experts argue Facebook could do a number of things to reduce fake news, but almost every option could hit its bottom line or would challenge CEO Mark Zuckerberg’s long-term vision for the company, Axios' Sara Fischer reports:

The most drastic changes Facebook could make to its policies include:

1. Ramp up its enforcement regime: Facebook has committed to hiring 20,000 moderators by the end of the year to help monitor content for fake news and misinformation. Many critics argue 20,000 people could not realistically monitor the billions of photos, posts, and videos uploaded to the platform daily.

3. Lower the threshold of removal. Facebook won’t publicly say how many pieces of nefarious content a Page or person needs to post before being removed, out of fear that it could lead bad actors to abuse the system.

4. Use stricter authentication of users: Currently, Facebook requires that users must be over the age of 13, and it requires users to use their “everyday names” and valid email accounts to set up a profile. It also requires advertisers to have further credentials, like mailing addresses.

The big picture: Critics and the media are beginning to take a slightly more empathetic view towards Facebook's tricky position.

The bottom line: Facebook may not be able to do much more than it has already tried, unless it makes a drastic change to its business and long-term vision.

"Organizations that monitor the health of democracies are converging around a similar idea: On average, the world is becoming less democratic for the first time in several decades," Bloomberg's Lauren Leatherby and Mira Rojanasakul report:

"In contrast to military coups or violent revolutions in the 20th century or the foreign invasions that toppled democracies ahead of World War II, most countries that are now experiencing a democratic decline have elected leaders." 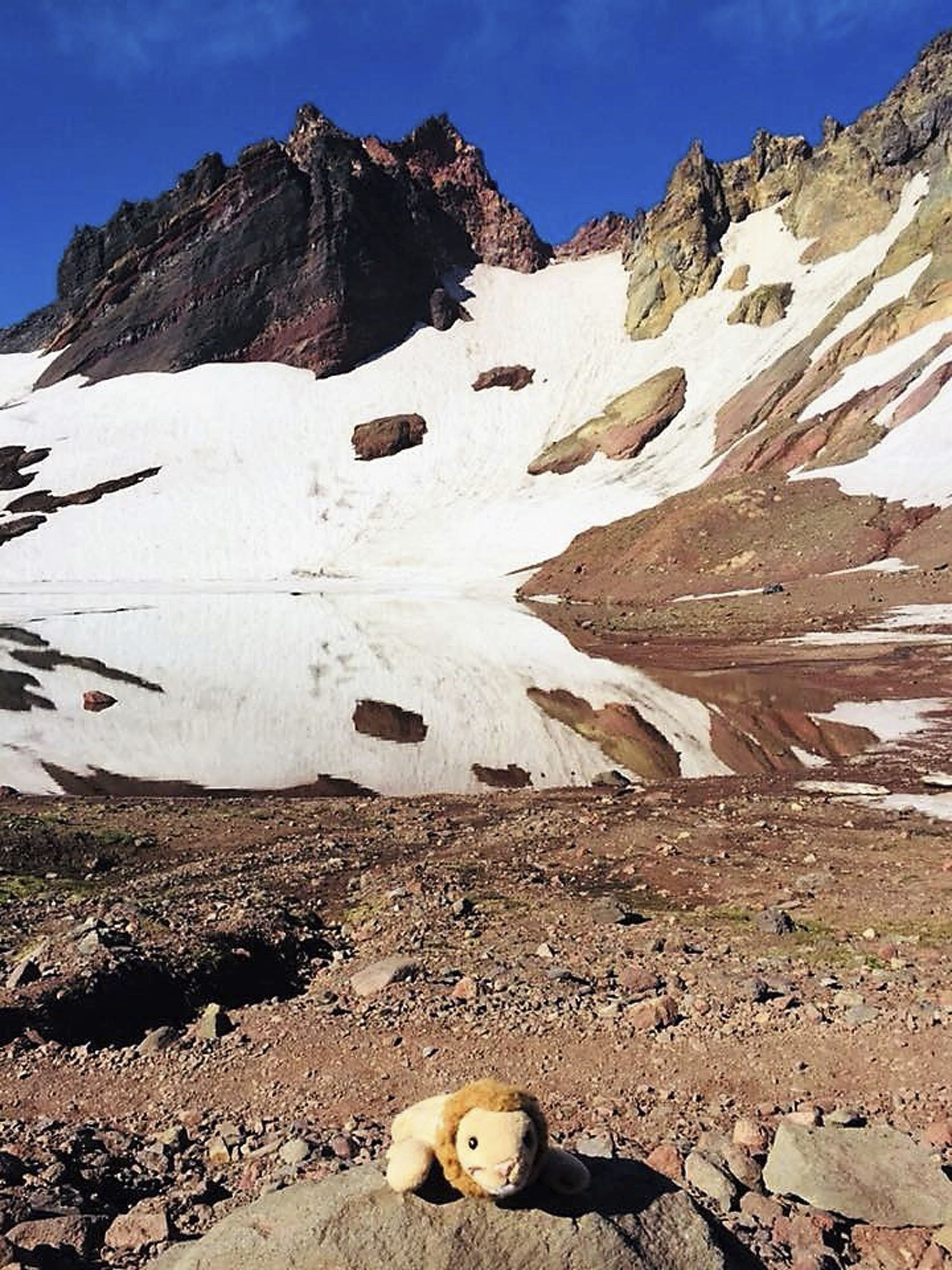 A 7-year-old girl who lost her beloved stuffed lion, Kitty, on a hike in the Oregon backcountry was reunited with the toy over the weekend after a community effort to find her, AP reports.

"President Trump is considering revoking the security clearances of at least half a dozen well-known former national security officials, ... in an extraordinary expression of his desire to punish increasingly vocal critics from past administrations," per the L.A. Times' Chris Megerian and Eli Stokols:

Why it matters, per WashPost: "The move immediately prompted accusations of political retaliation by current and former officials, as well as security analysts, who said Trump would set a dangerous precedent by punishing political speech." 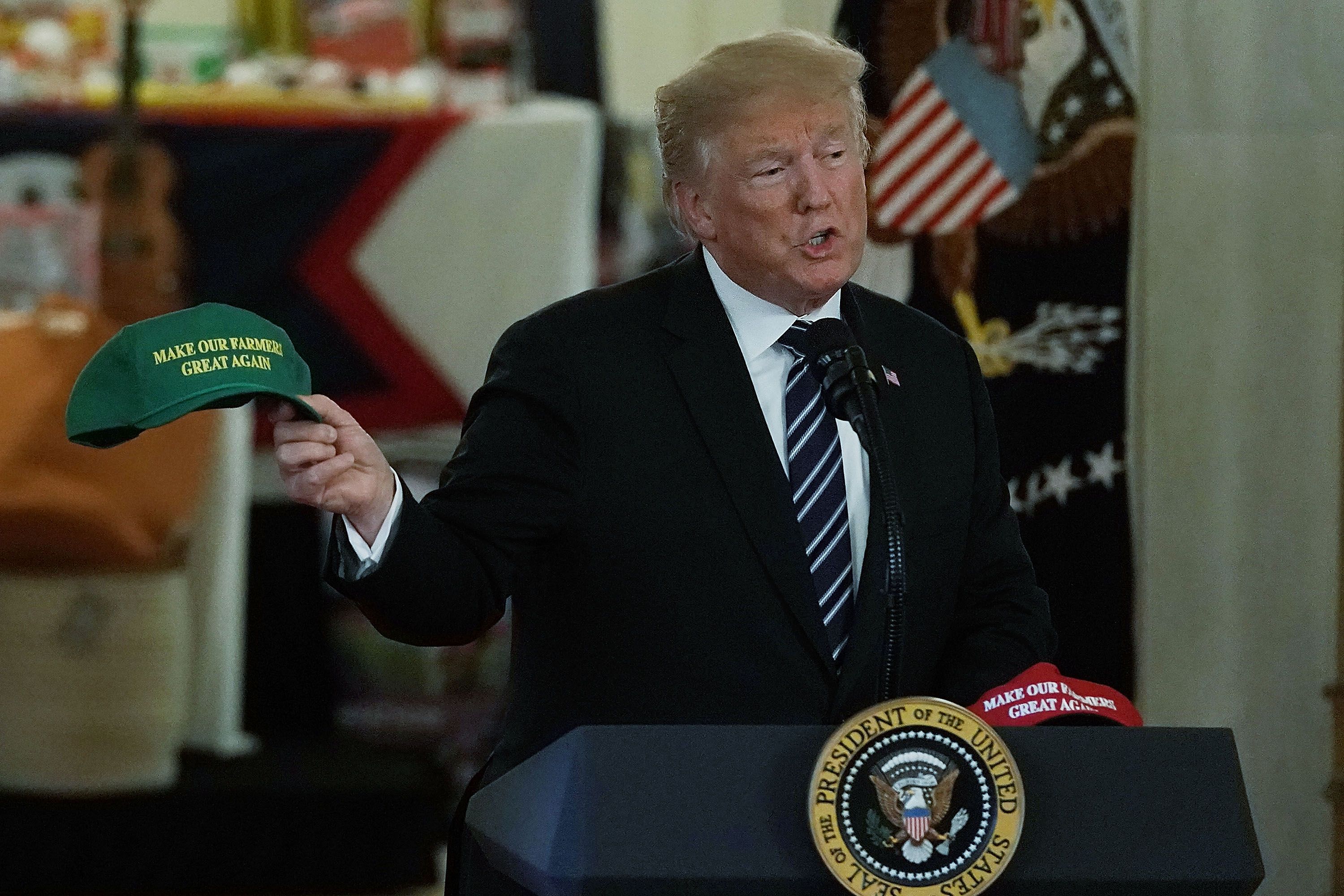 President Trump holds up a "Make Our Farmers Great Again" hat during a Made in America Product Showcase at the White House yesterday. (Alex Wong/Getty Images)

President Trump's all-caps war threat against Iran President Hassan Rouhani is a way for Trump to look like a tough guy at a time when that's being questioned because of his handling of Vladimir Putin.

But it also builds a Trump comfort zone with Republican lawmakers, who remain publicly supportive of him while privately expressing frustration with his handling of a host of issues.

Sen. Lindsey Graham (R-S.C.) — an on-again, off-again critic of Trump — is off-again because of the administration's Iran offensive, especially a tough speech by Secretary of State Mike Pompeo.

Graham told me in the green room before his appearance that he plans to introduce a resolution of support for the Iranian people that he believes will draw support from almost all Republican lawmakers, plus many Democrats: "This is a moment in history."

6. What happens if Roe v. Wade is overturned

The nomination of Brett Kavanaugh throws the future of Roe v. Wade into uncertainty, and Axios' Kerrie Villa looks ahead to the possible fallout:

The N.Y. Times says that while Nevada has the best chance at being the first state with a majority-female legislature, "at least eight more have a shot at reaching or surpassing the 50 percent mark in November":

"Home sales have now declined on an annual basis in five of the first six months this year, a worrying trend since housing is considered a crucial indicator of overall economic health," per The Wall Street Journal's Laura Kusisto and Sharon Nunn (subscription):

"Chick-fil-A will become the first quick service restaurant to offer full meal kits next month as a trial at its Atlanta outlets helps the chain decide whether to roll out the cook-at-home offering nationwide," USA Today's Paul Davidson reports:

And this screen is 86 words. Enjoy your saved time.

Thanks for reading. Updates all day — and tonight on Georgia's GOP governor's runoff — on Axios.com.