A president who has always been touchy about his legitimacy is now the fourth American president to face the machinery of impeachment.

House Speaker Nancy Pelosi announced "an official impeachment inquiry" at 5 p.m, with the broadcast networks breaking in across the country:

Being there: Around 120 reporters crowded into the hallways in the Capitol basement, waiting for the House Democratic Caucus to disperse from the meeting where Pelosi announced her support for an impeachment inquiry.

On the Republican side, Rep. Andy Biggs of Arizona, a member of the Judiciary Committee, said: "A lot of my colleagues are excited about how crazy they think it is. I talked to a lot of people who were like: 'Wow, unbelievable.' I think both sides are getting locked and loaded to do some battle here." 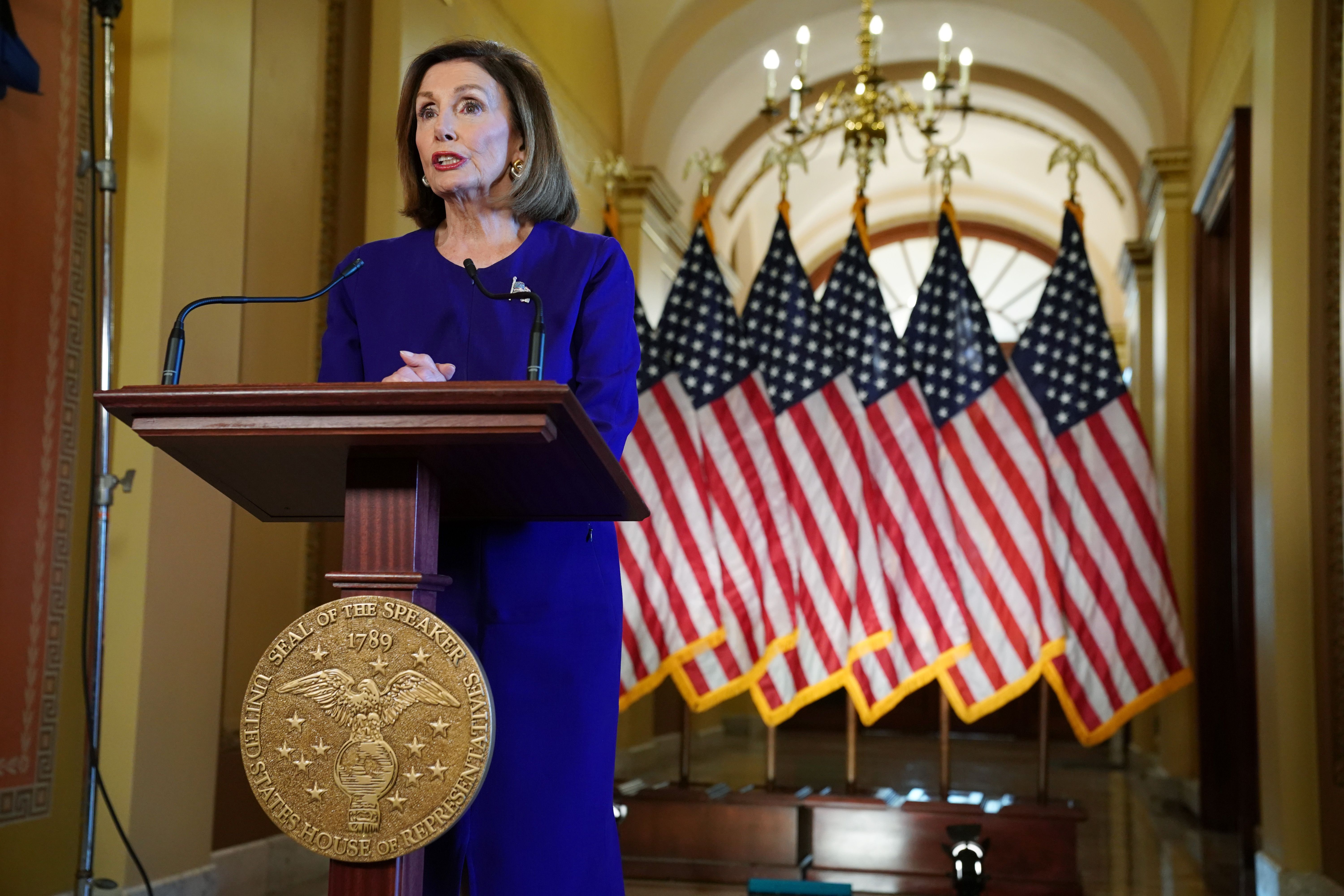 What to watch: Today, the House will vote on a resolution demanding that Trump release the whistleblower complaint regarding the president and Ukraine.

Despite a day that could haunt them through history, I talked to several Trump allies who weren’t despondent. Here's what they hang their hats on:

Between the lines: For whatever bluster he'll muster, Trump knows that from the perspective of history it's not good to be just the fourth American president to face impeachment. (Andrew Johnson and Bill Clinton were impeached but then acquitted by the Senate. Richard Nixon resigned in the face of impeachment.) 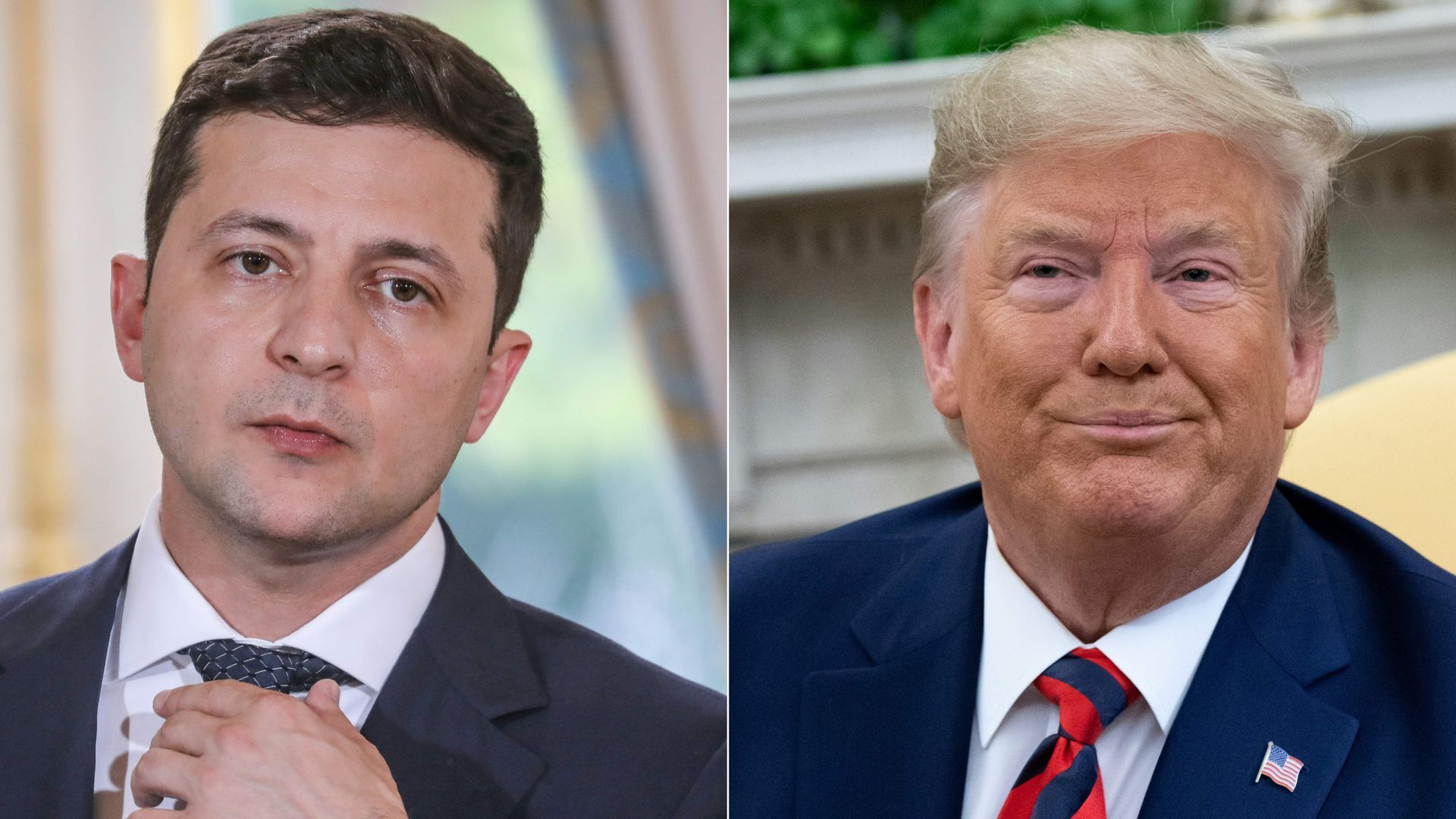 President Trump is set to meet face-to-face with Ukrainian President Volodymyr Zelensky for the first time at the UN General Assembly today as the House launches an impeachment inquiry around their July phone call.

What to watch, from Axios World editor Dave Lawler: A senior White House official told reporters Trump will congratulate Zelensky on his election win in April and his "energy and success" on anti-corruption reforms.

Zelensky told Voice of America yesterday that he anticipates a "warm" meeting with Trump, but didn't comment on the call.

4. How the day unfolded on screens 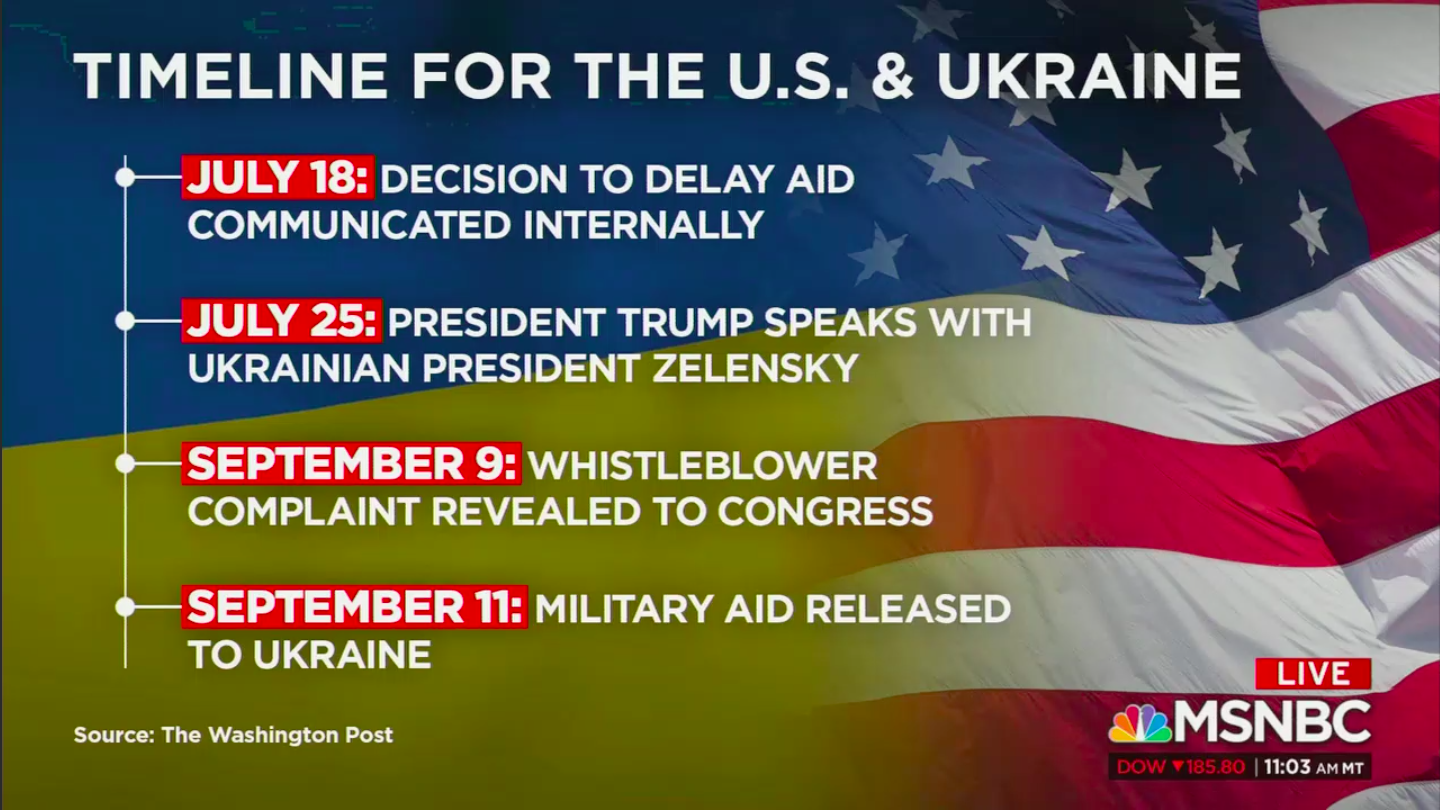 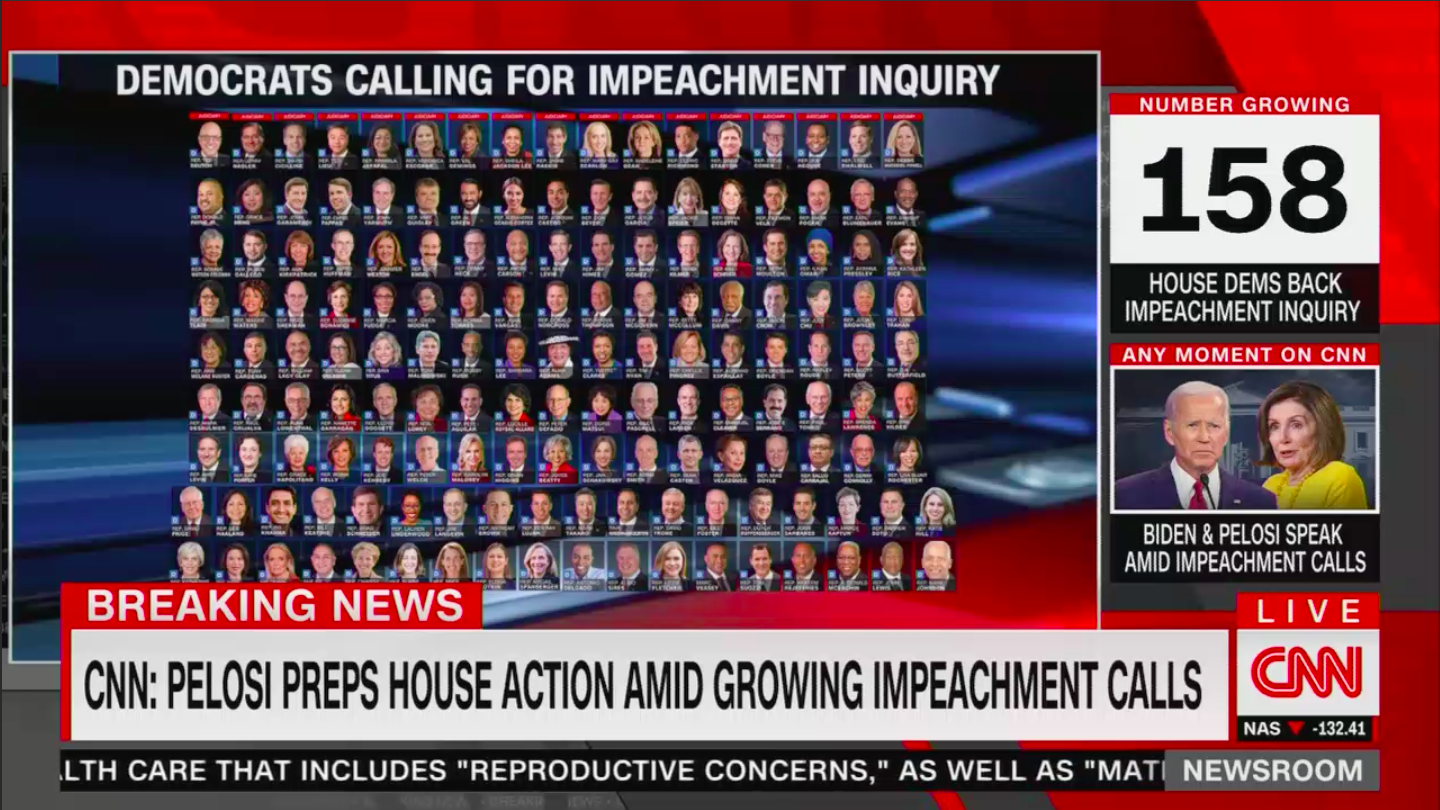 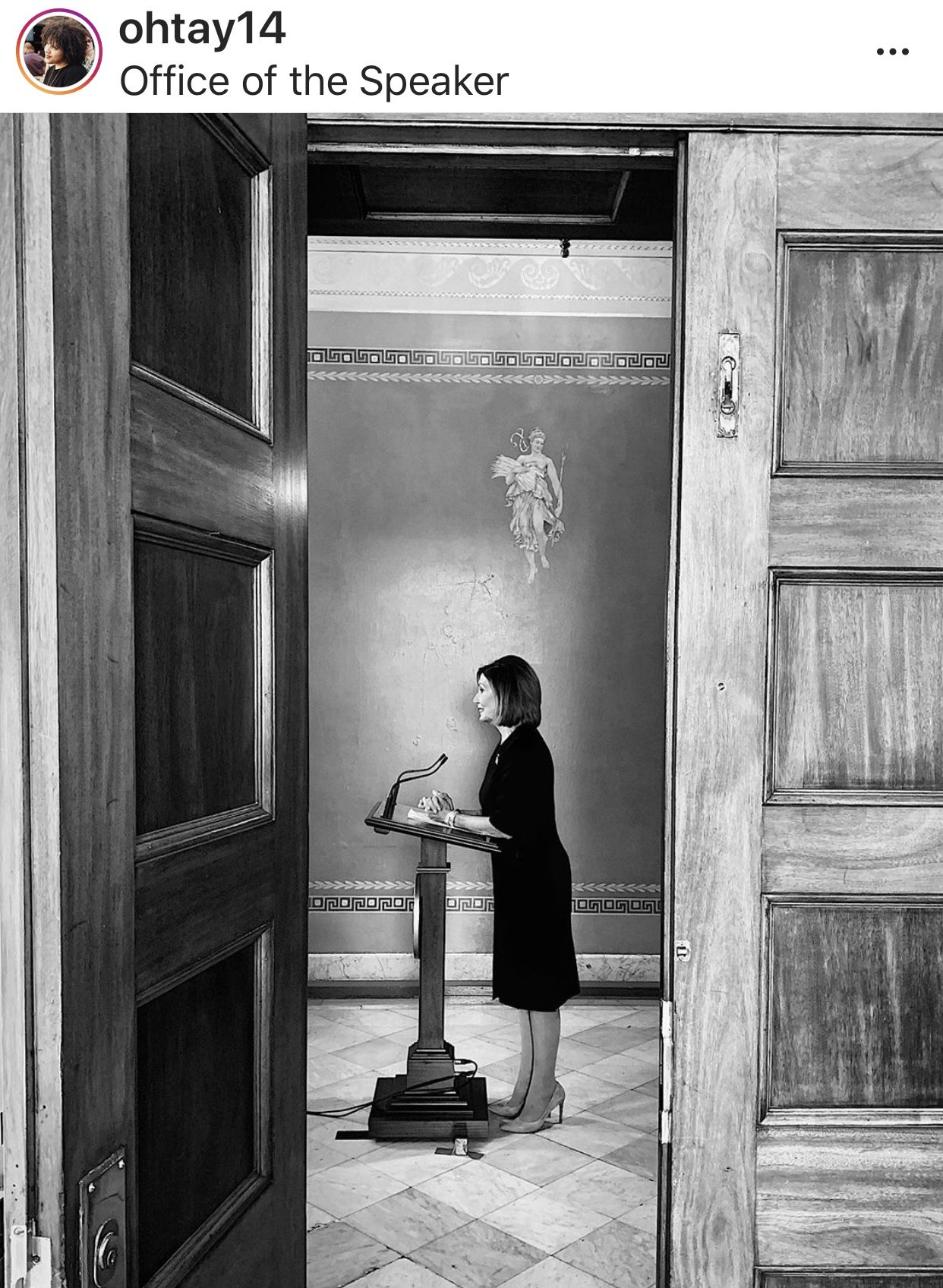 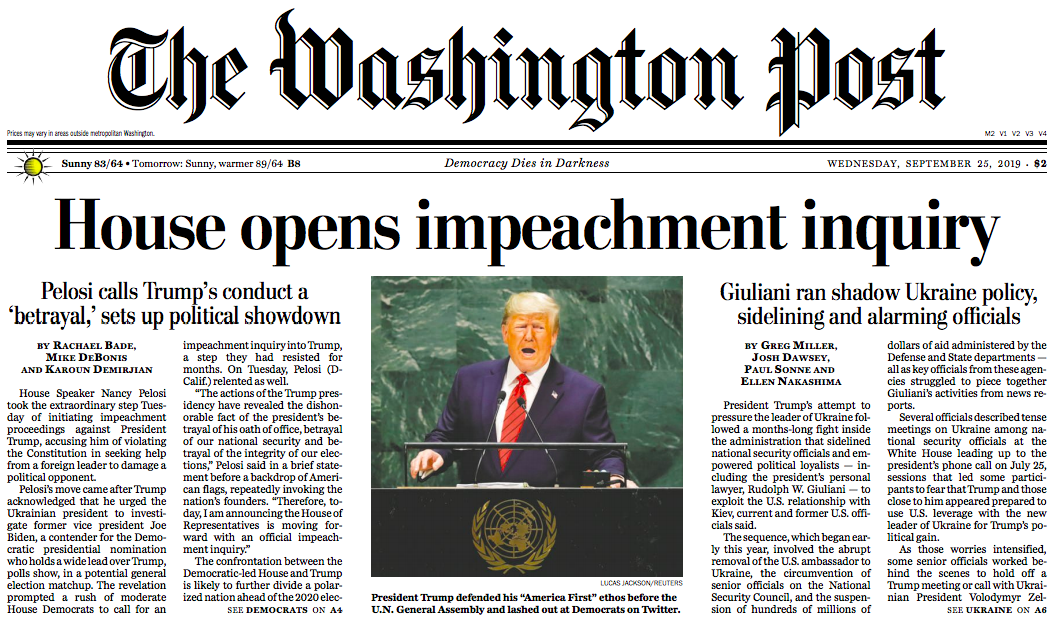 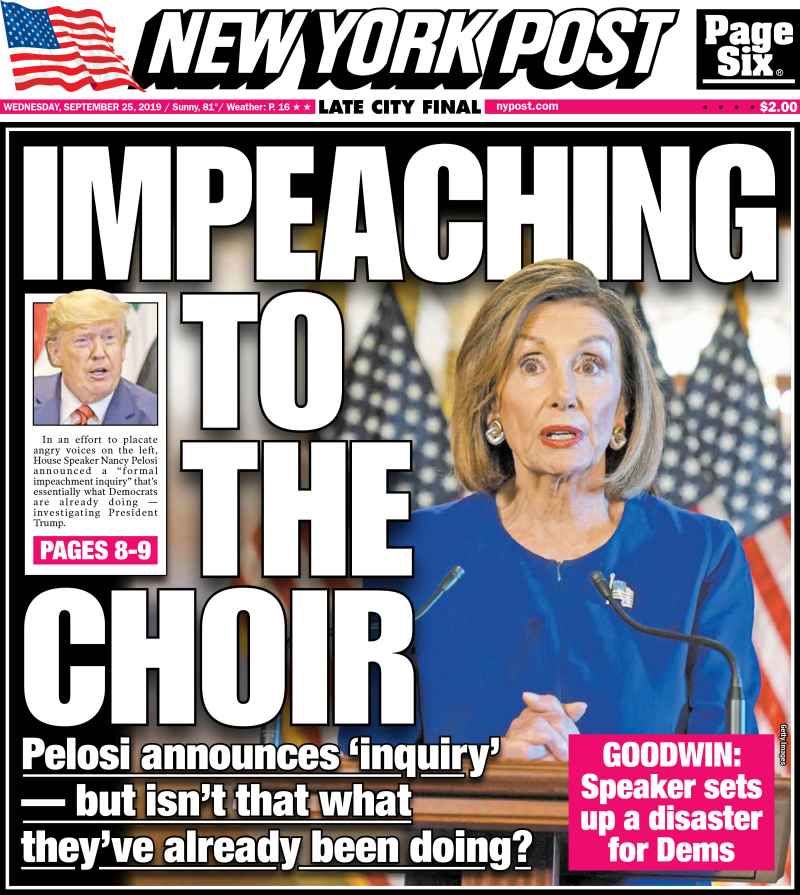 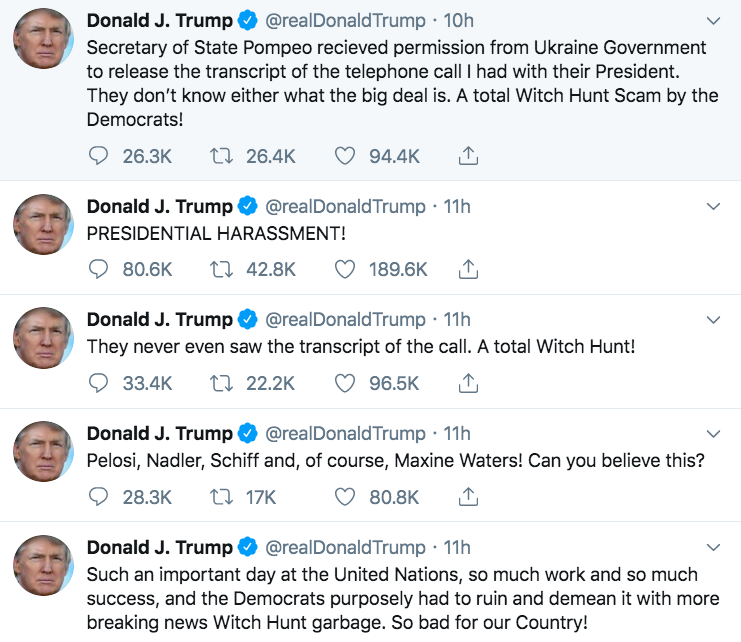 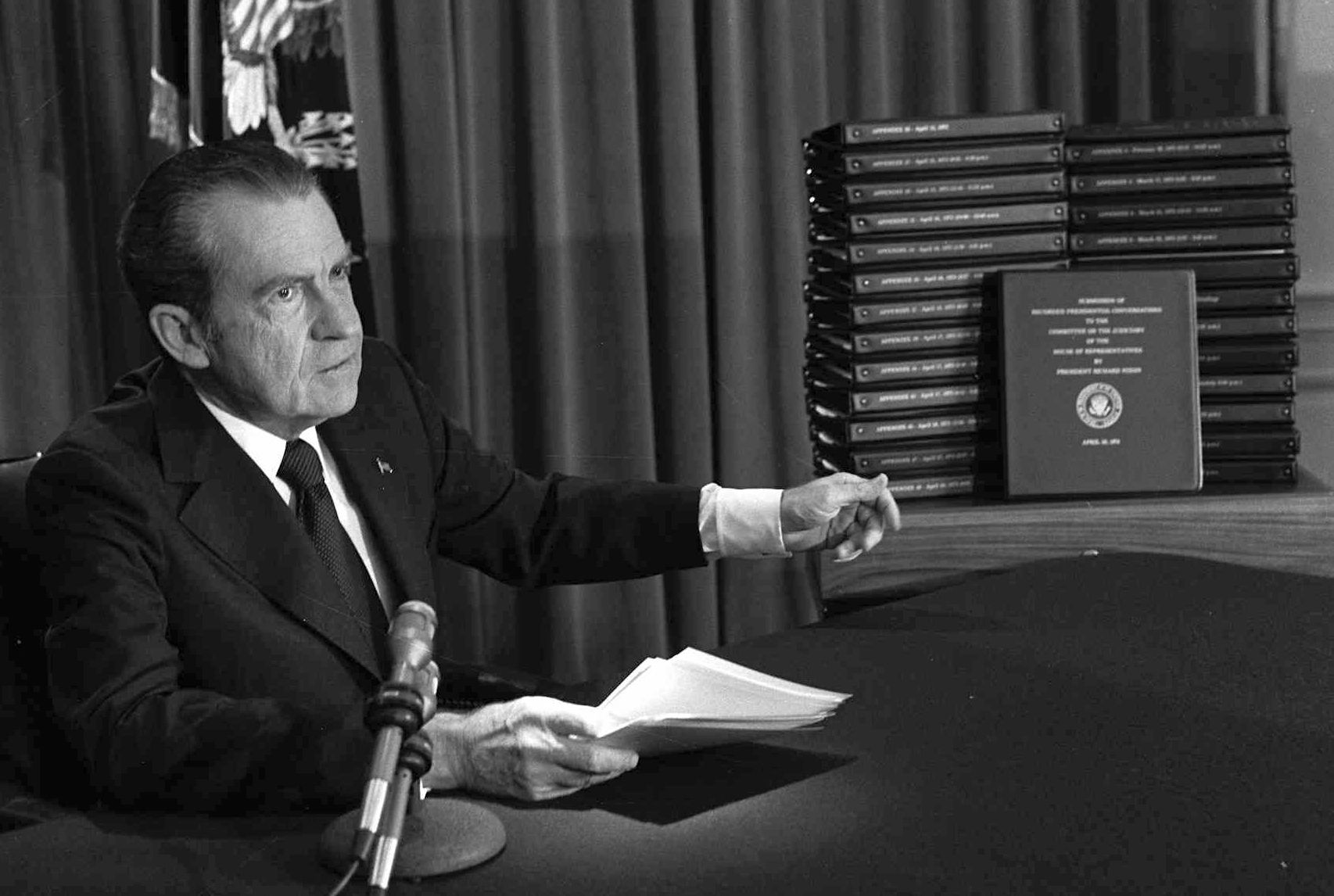 On April 29, 1974, President Richard M. Nixon points to the transcripts of the White House tapes after he announced during a nationally-televised speech that he would turn over the transcripts to House impeachment investigators. Photo: AP

"As a junior aide in President Richard Nixon’s White House, I saw congressional oversight and investigation command immensely greater power and respect than it does today," Jonathan C. Rose — special assistant to Nixon from 1971 to 1973, and associate deputy attorney general from 1973 to 1975 — writes in The Atlantic.

"As evidence implicating the White House mounted, the administration displayed no inclination toward negotiation or accommodation with the Senate Watergate Committee. On March 15, 1973, Nixon issued an edict asserting executive privilege, declaring that White House aides and papers were entirely off limits to the committee. If the committee desired to press the issue, the president said, it could pursue a contempt prosecution through the courts.

"Pressed for his reaction, [Senate Watergate Committee Chairman Sam] Ervin said Nixon’s position was 'executive poppycock, akin to the divine right of kings.' Ervin declared that his committee had no intention of submitting to the suggested judicial delays, but would instead utilize the Senate’s sergeant at arms to arrest any recalcitrant White House aide, bring him to the bar of the Senate for trial, and ultimately compel him to testify.

"By mid-April 1973, Nixon’s resistance to testimony by White House aides had collapsed, and a number of them testified. This testimony disclosed the White House taping system and confirmed the existence of  tapes. Those disclosures ultimately led to Nixon’s departure from office."

A major new UN climate report warns of the risk to Earth's oceans, "threatening everything from the ability to harvest seafood to the well-being of hundreds of millions of people living along the coasts," per the N.Y. Times.

New York's Metropolitan Opera announced yesterday that Plácido Domingo had agreed to withdraw from his slate of scheduled performances following allegations of sexual harassment made by multiple women, reports the AP's Ronald Blum.

The state of play: While multiple American performances have been cancelled amid the allegations, Domingo's reception in Europe has been far different. Last month, he received lengthy ovations in Salzburg weeks after the AP initially published the allegations. 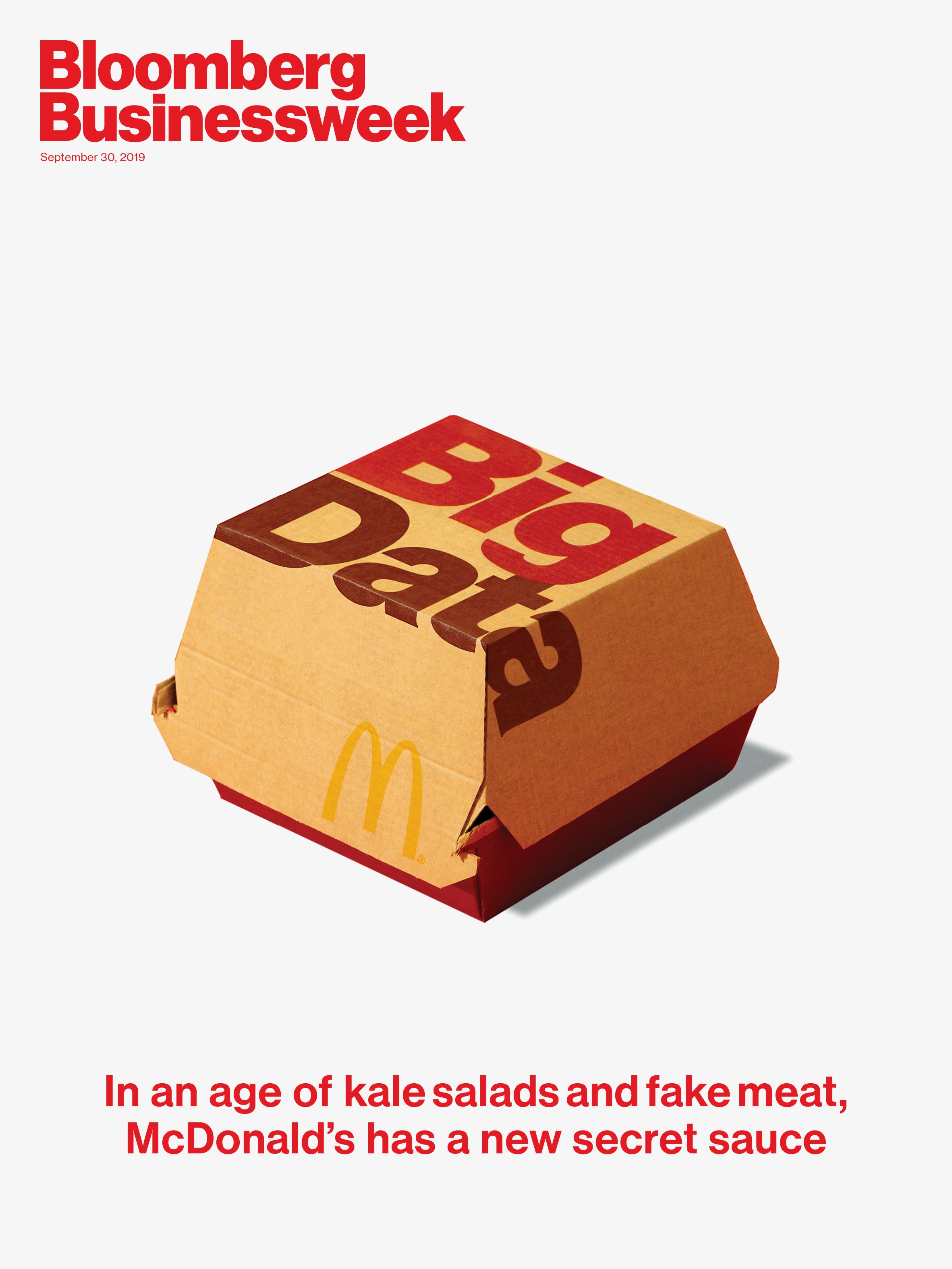 Why it matters: "Only a handful of other companies in the S&P 500, almost all of them California technology suppliers such as semiconductor giant Advanced Micro Devices and chipmaker Nvidia, have outperformed McDonald’s returns since" Easterbrook's ascension in 2015.