As President Trump meets other NATO leaders in Brussels today, the backdrop is his role in tearing at the post-World War II order. But Axios future editor Steve LeVine writes that a picture is taking shape of an American future without many of the basic institutions that many consider 20th century advances:

The N.Y. Times' Peter Baker quotes Curt Levey, president of the conservative Committee for Justice, as saying the confirmation of Brett Kavanaugh will mean "a conservative court, really [for] the first time since the 1930s."

Be smart: Karen Harris, managing director at Bain Macro Trends, tells Axios that the new order will be the U.S., Russia and China — "multiple parallel great powers pushing against each other in the two new borderlands of cyberspace and [actual] space."

Trump and Secretary of State Mike Pompeo are reflected in a mirror during breakfast today at the U.S. chief of mission residence in Brussels. (Brendan Smialowski/AFP/Getty Images)

Breaking ... President Donald Trump, in a "startling public outburst" at the U.S. chief of mission residence in Belgium ahead of the NATO summit, said "Germany is a captive of Russia" and "totally controlled by Russia” because of energy purchases.

Between the lines ... The gas pipeline is something Trump has been complaining bitterly about for months, Jonathan Swan writes from Brussels:

Be smart: It looks like the U.K. visit will need to achieve rapid corrective surgery after combative Trump appearances at NATO. 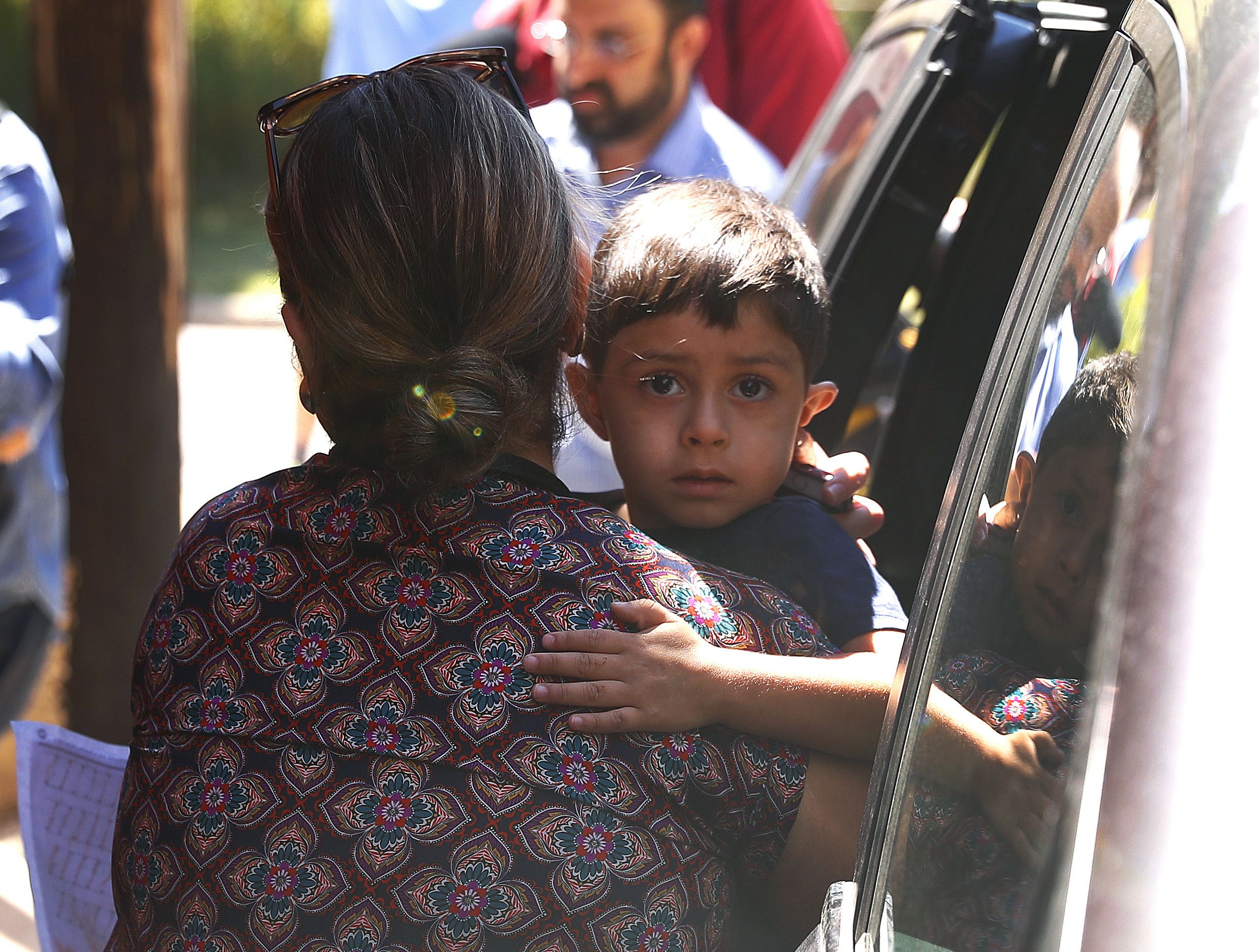 A child from Honduras is brought to the U.S. Immigration and Customs Enforcement office in Grand Rapids, Mich., yesterday.

"It is not every day that a potential constitutional showdown over a presidential subpoena coincides with a confirmation hearing for a crucial Supreme Court seat. Less likely yet is a nominee who has written extensively about the very question at the heart of the dispute," the N.Y. Times' Adam Liptak writes:

All politics is local: Lead of today's WashPost Metro section ... "Kavanaugh's confirmation would be a high distinction for school: Georgetown Prep already has one graduate — Gorsuch — on the Supreme Court."

Major college this year are dropping their requirements for prospective students to submit an SAT or ACT essay score, per WashPost higher ed writer Nick Anderson:

"Princeton and Stanford ... last week became the latest to end the mandate, following Dartmouth College and Harvard and Yale."

7. "Humanity is on the precipice of massive change in how we work"

Axios chief tech correspondent Ina Fried (and author of the daily tech newsletter Login) has a piece coming in the N.Y. Times Book Review, "Three Books Consider What Happens When the Robots Take Over":

"In "The Fourth Age," Byron Reese, "whose day job is chief executive of the technology research company Gigaom, begins by grounding the reader in what he sees as the three major changes in human civilization. The first, characterized by the discovery of fire and language, led humans to greatly increase their brain size, paving the way for future advancement. The second was the development of agriculture, which led to the birth of cities. And, finally, writing and the wheel have shaped much of everything until the present. Robots and A.I., meanwhile, promise a fourth age characterized by new challenges, including what the place of humans will be in a world filled with devices that are stronger and potentially smarter than us." England's World Cup-winning team from 1966 (The Times of London)

"At a time when populist politicians are trying to choke off or reroute migration flows, what matters to fans of the [all-European teams in the World Cup] semifinals — England, France, Belgium [eliminated] and Croatia — wasn't the players' ancestry but that they excelled," AP's Angela Charlton writes from Paris:

Why it matters: "Europe owes its sporting power ... to a long-running outreach into poor suburbs or neighborhoods, giving kids of all backgrounds access to coaches and fields and facilities — and teams more talent to choose from." Parisians celebrate on the Avenue des Champs-Élysées, with the Arc de Triomphe in the background, after France advanced to the World Cup final for the first time since 2006, with a 1-0 win over Belgium yesterday.

"Outsourcing lunch ... Families around the country are finding new options for their children’s midday meal thanks to a growing number of delivery options catering to students," Melissa Kossler Dutton writes for AP:

Sign of the times ... "Many schools have banned [delivery through apps], citing safety concerns about delivery drivers showing up at school unannounced and the burden of tracking down students to alert them that their meals have arrived."

Thanks for reading. We'll have updates all day on Axios.com.