Situational awareness: We told you in Axios PM that the Oscars will now include an "achievement in popular film" category. Among much Hollywood blowback, a front-page L.A. Times headline confers a nickname that's sure to stick: "The superhero Oscar."

With his constant commentating and public negotiating, Trump lawyer Rudy Giuliani is setting up unmeetable expectations for special counsel Robert Mueller — a kind of insurance policy with the president's base.

Giuliani told Axios' Jonathan Swan that there are two topics the president's lawyers want to rule out in order to agree to a Trump sit-down with Mueller:

Giuliani mentioned those as if they were minor details — totally reasonable areas for Mueller to agree to avoid.

So here's how to read between the lines of Giuliani's frequent media appearances:

Giuliani is also personalizing it, framing everything as Mueller trying to entrap Trump.

Why it matters ... Giuliani is publicly setting up Mueller with expectations he must know Mueller can’t meet:

Be smart ... The strategy is working:

"Trump aides are mapping out plans for the fall that would offer a variety of options to Republican candidates, including visits by ... Ivanka Trump to blue states and presidential tweets to bolster red-state allies," the WashPost's Bob Costa and Josh Dawsey report:

Wait for it: "But Trump doesn’t always listen to advisers and has been driving the strategy himself, informally polling his inner circle about how far he might go on trade policy and a possible government shutdown over immigration policy without crippling the GOP field."

3. Bite of the day: Market exuberance

"CEO Elon Musk’s suggestion ... that he wanted to take Tesla private at $420 a share, putting a value of $72 billion on the carmaker, had some investors wondering whether ... Wall Street has become overheated after nearly a decade of gains following the 2008 financial crisis," Reuters' Noel Randewich reports.

P.S. The SEC is asking Tesla whether "Musk was truthful when he tweeted that he had secured funding for what would be the largest-ever corporate buyout," per The Wall Street Journal (subscription). 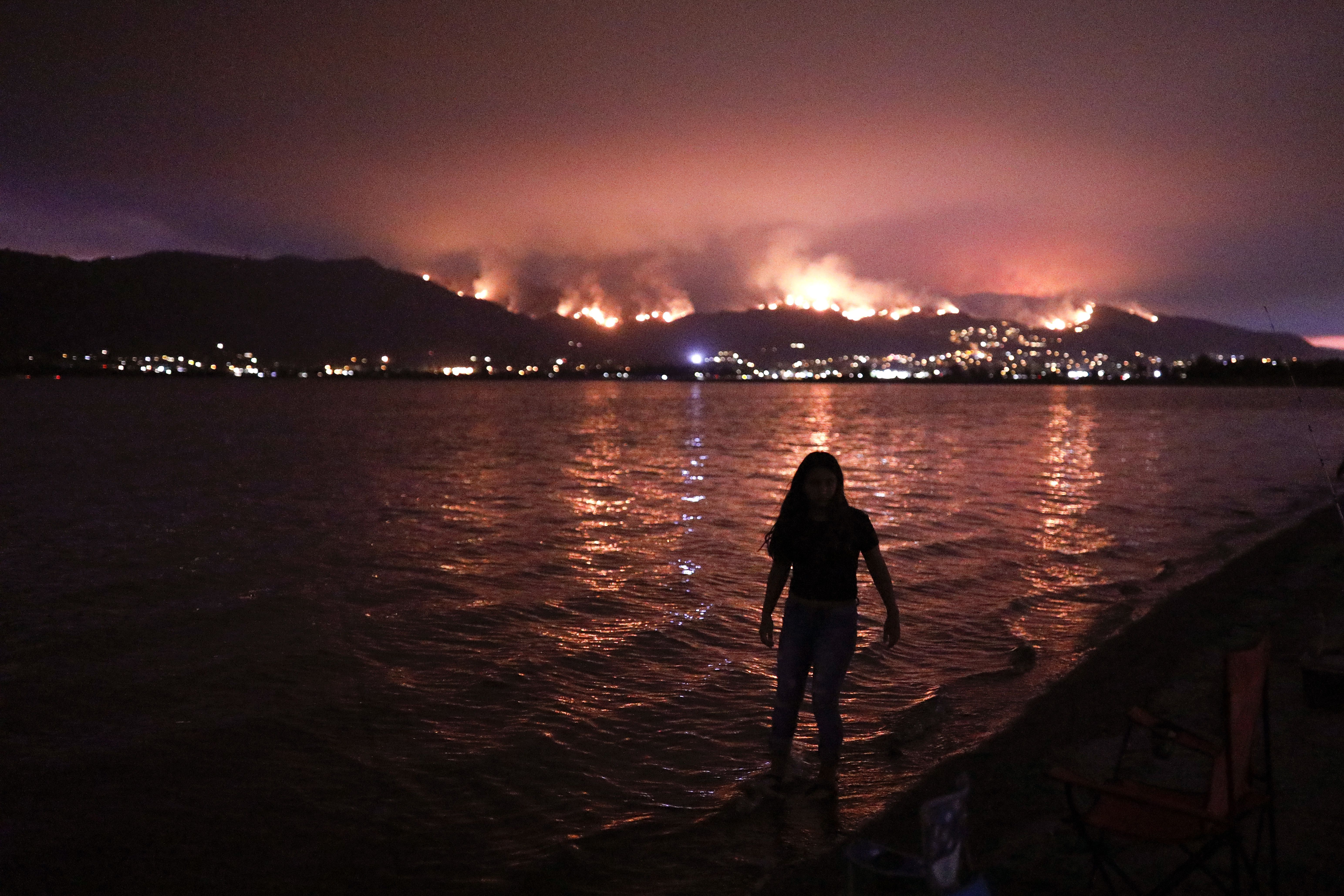 In Riverside County, Calif., a girl wades through water yesterday while watching a wildfire burn in the Cleveland National Forest in Lake Elsinore. 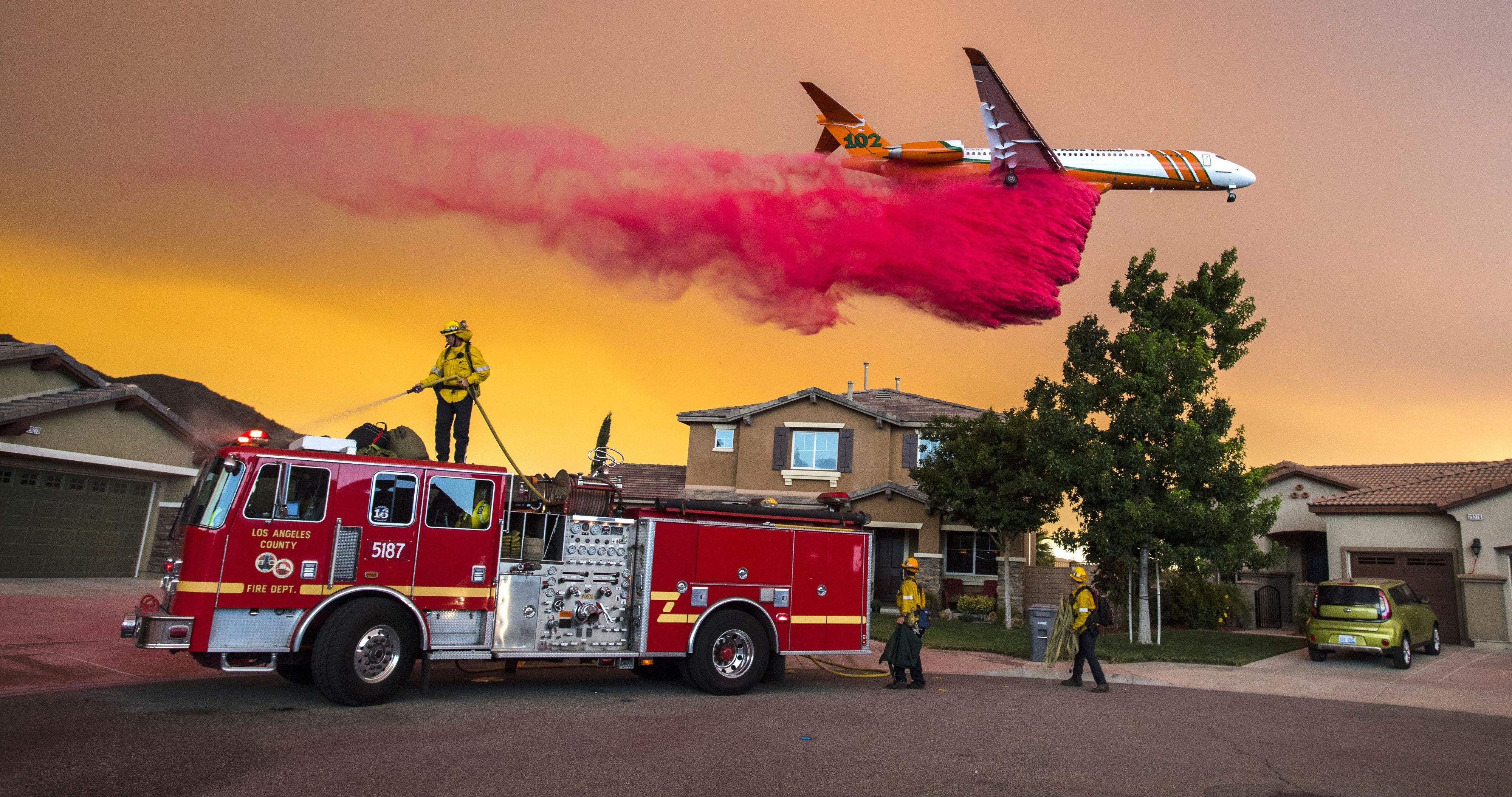 5. Chance to vote for a congressman charged with insider trading 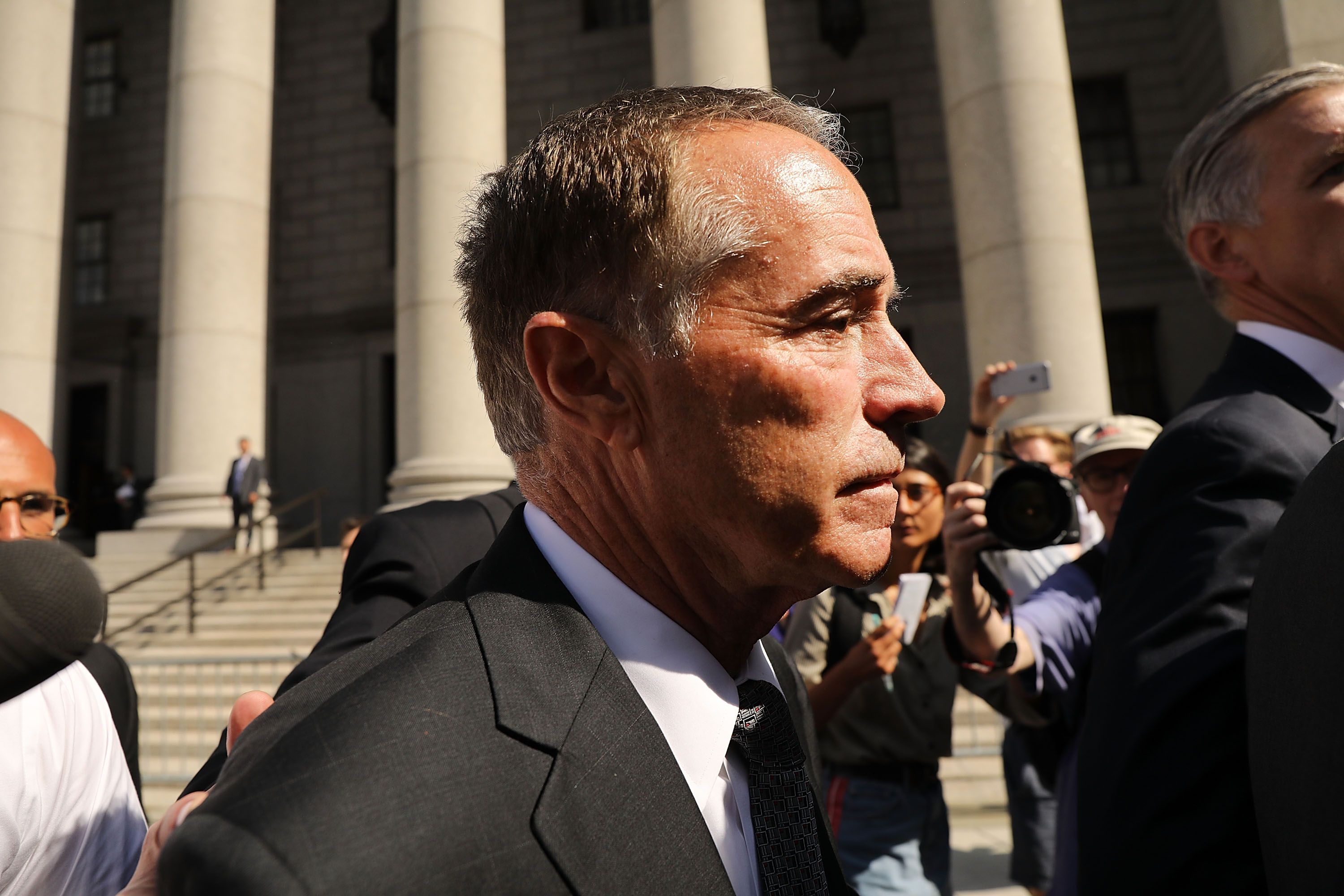 "Republican U.S. Rep. Chris Collins [R-N.Y.] says he will remain on the ballot running for re-election in New York as he fights charges that he used inside information about a biotechnology company to make illicit stock trades," AP reports: 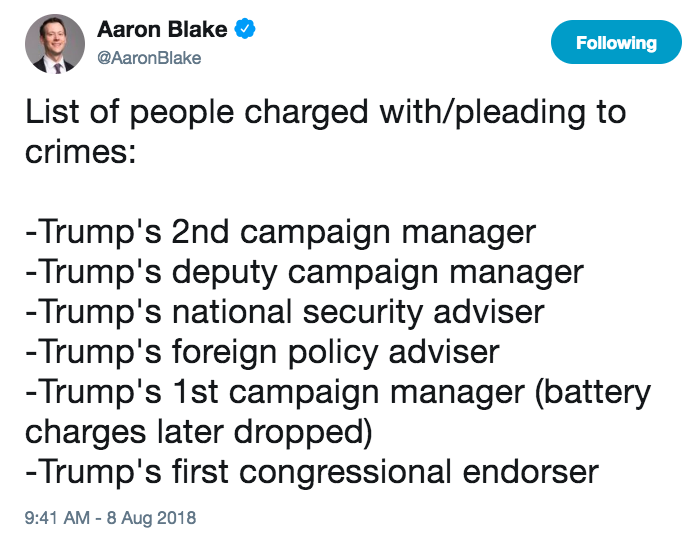 Elizabeth Cassarino, a yellow-cab driver who said she had maxed out her credit cards and was having trouble buying food: "Finally. We’re starving to death."

7. We weren't always this split over our presidents

Here's how badly the country has fractured over President Trump: He has a near-universal approval among Republicans, while three in four Democrats want him impeached. But it's not like the last few presidents united the country, either.

"For almost all of American history, even presidents with strong views have realized that part of their job was to try to unite the country. Starting with Donald Trump’s inaugural address, he suggests an opposite point of view — that uniting the country is not part of his job, and that he thinks a president becomes more powerful if he divides." 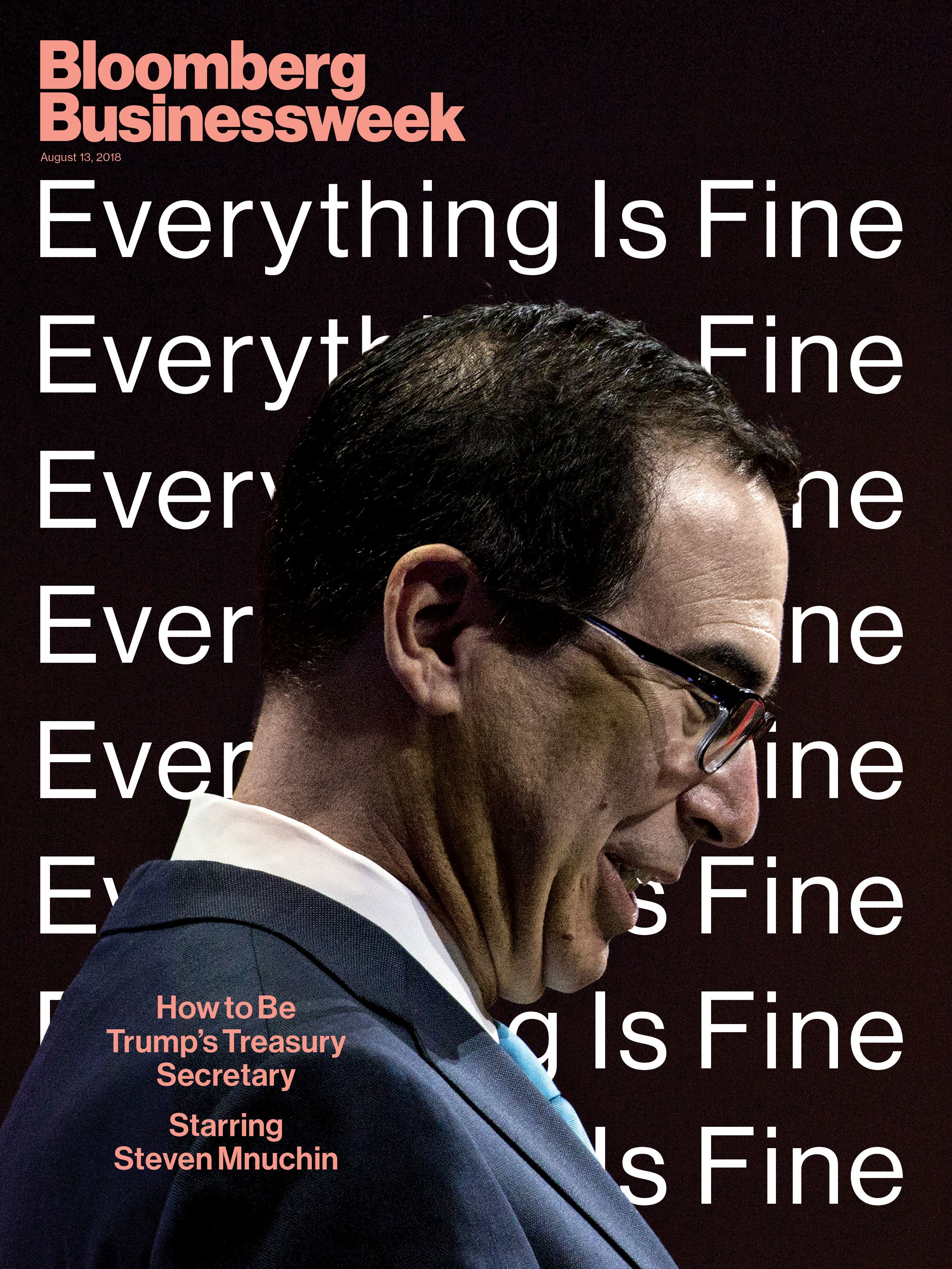 "One of only a few moderates left in the White House, Mnuchin has acted, not always successfully, as a bulwark against some of the administration’s more reactionary forces, trying to dissuade Trump from launching a full-blown trade war with China and other allies, which many believe could devastate the global economy."

Be smart: "Mnuchin has often found himself having to explain that Trump really didn’t mean what he just said or tweeted."

9. Spike Lee at his peak 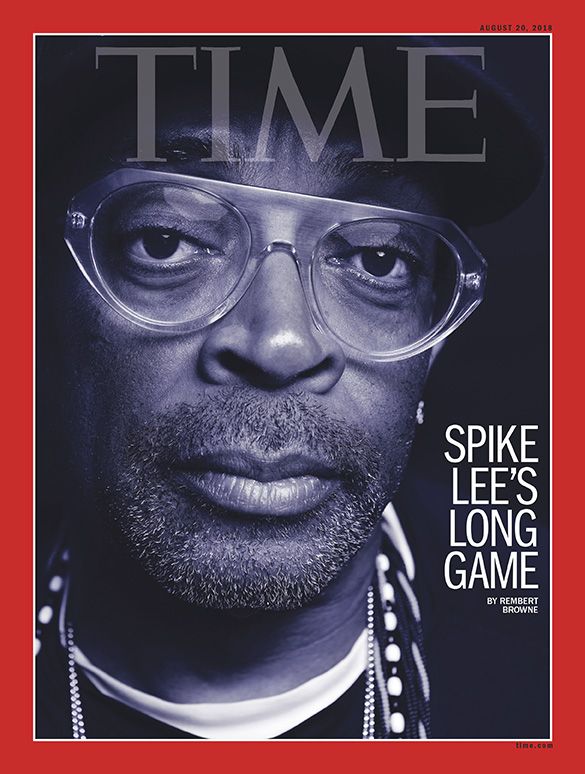 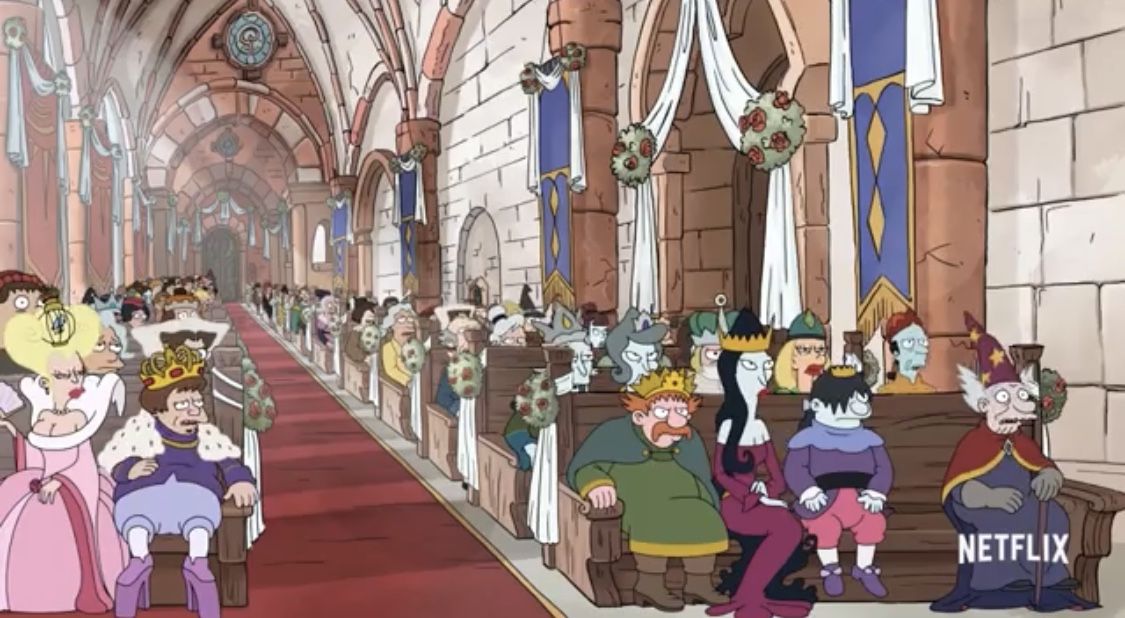 Matt Groening's new show, “Disenchantment,” which Netflix will release on Aug. 17, "shares a satirical sensibility and a distinctive curvy cartoon style with 'The Simpsons,' his enduring Fox comedy that starts its 30th season in September," the N.Y. Times' Dave Itzkoff writes:

The details, from a Netflix release: "From the mind of Matt Groening, comes the 10-episode adult animated comedy fantasy series, Disenchantment, launching on Netflix, August 17."

Thanks for reading. Live updates all day on Axios.com.