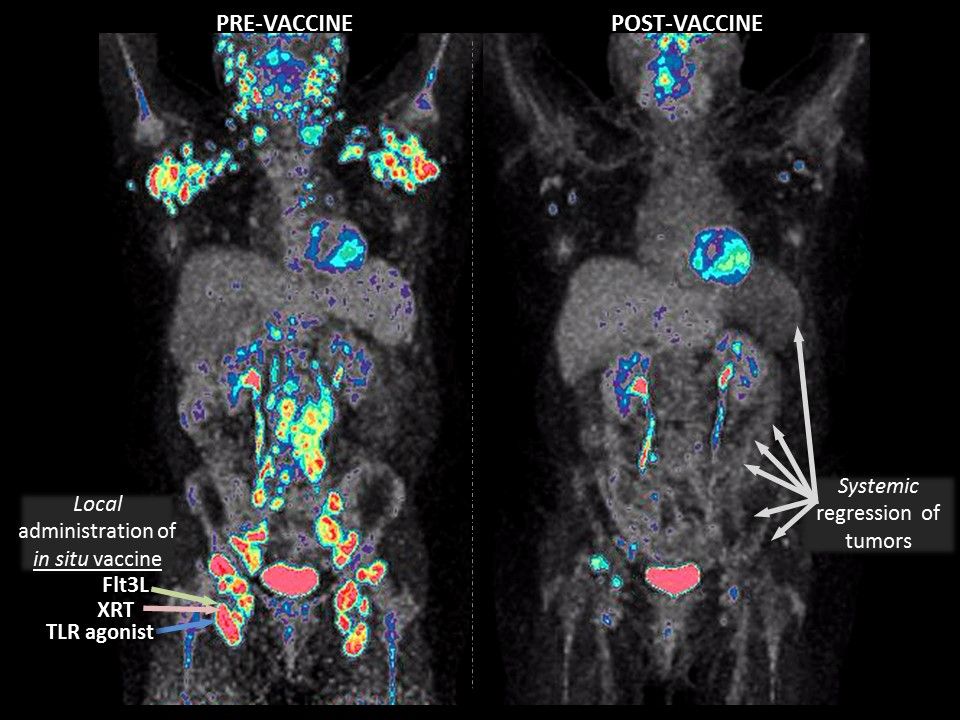 Systemic tumor regression in patients with indolent B cell lymphoma before vaccine (on left) and after vaccine. Photo: Joshua Brody/Mount Sinai Health System

Scientists announced a preliminary success in devising a cancer "vaccine" that was able to help prime the immune system to attack lymphoma cancer tumors in some patients, leading to a period of remission, according to a clinical study of 11 patients published in Nature Medicine Monday.

Why it matters: Indolent non-Hodgkin’s lymphomas (iNHLs) tend to be a slow-growing cancer that is incurable with standard therapy and poorly responsive to a newer type of treatment called checkpoint blockade. Scientists have been seeking ways to broaden the response of immunotherapy to more patients, and a therapeutic cancer vaccine is one option that's under consideration.

Background: There are many types of immune cells in the body, with dendritic and T-cells both playing powerful but distinct roles. Dendritic cells detect an infection or cancer cells and alert the T-cells to attack en masse.

This new type of treatment is designed to force the tumor to expose itself and trigger the immune response.

What they did: The trial, which began in 2013, tested a three-pronged attack as part of the treatment. The tests were done first in animals and then in 11 human patients, most of whom had iNHLs, says study author Joshua Brody, director of the lymphoma immunotherapy program at the Icahn School of Medicine at Mount Sinai Hospital.

How it works: Each of the 3 components in the treatment plays an important role, Brody says. Separately, each have shown modest improvements in patient outcomes, but together they show a stronger impact.

What they found: The mouse trial was robust and successful, while the trial in the human participants showed a strong response in some, but not all, patients.

What they're saying: Several experts who were not part of this study tell Axios it shows some promising results, but also caution that the study was small and only helped some of the patients.

What's next: Based on the early success, the research team has already started a new clinical trial for patients with lymphoma, breast cancer and head/neck cancer that adds the fourth component — the PD1 blockade — in the hope of getting that last resistant set of patients to respond.