This site uses cookies to enhance your reading experience. By using this site, you consent to our use of cookies.Okay
Axios Sneak Peek
By Jonathan Swan

Welcome to Sneak Peek, our weekly lookahead for both ends of Pennsylvania Avenue, plus our best scoops.

⚡️TEHRAN, Iran (AP) — "Iranian state TV reports Iran will no longer abide by any limits of its 2015 nuclear deal. ... The announcement came Sunday night after another Iranian official said it would consider taking even-harsher steps over the U.S. killing of Iranian Gen. Qassem Soleimani on Friday in Baghdad."

The Trump administration tried, unsuccessfully, to persuade top Iraqi officials to kill a parliamentary effort to force the U.S. military out of Iraq, according to two U.S. officials and an Iraqi government official familiar with the situation.

Why it matters: The Iraqi parliament passed a resolution today calling on the Iraqi government to expel U.S. troops from Iraq, after the U.S killed Iranian Gen. Qasem Soleimani and a leader of an Iranian-backed Iraqi militia with a drone strike near Baghdad airport.

"I think it would be inconvenient for us, but it would be catastrophic for Iraq," said a U.S. official familiar with the Trump administration's effort to block the vote. "It's our concern that Iraq would take a short-term decision that would have catastrophic long-term implications for the country and its security."

"The United States is disappointed by the action taken today in the Iraqi Council of Representatives," said State Department spokesperson Morgan Ortagus.

Behind the scenes: Trump administration officials have warned senior Iraqi officials that Iraq would suffer dangerous consequences if the U.S. withdrew its military and its funding of the Iraqi security apparatus, according to sources familiar with the outreach.

The other side: A senior Iraqi official emphasized that many Kurdish and Sunni members of parliament, who tend to be more supportive of the American presence in Iraq, did not attend the vote to expel the U.S.

But Abbas Kadhim, who leads the Atlantic Council Iraq Initiative and was a senior adviser to the Iraqi ambassador during the Obama administration, thinks the vote has more serious long-term consequences for the U.S.-Iraq relationship.

The big picture: A U.S. withdrawal from Iraq — something Trump has long wanted but has felt forced to defer — would deeply undercut America's ability to fight ISIS.

2. "No decision made" by Pelosi on sending impeachment articles

When the House of Representatives returns to work Tuesday, don't expect an immediate announcement by Speaker Nancy Pelosi to send the articles of impeachment to the Senate, reports Axios' Margaret Talev.

The latest: A leadership aide tells Axios no decision has been made and that it may be a couple of weeks before Democrats can understand the significance of new revelations about Ukraine-related information being withheld by the White House — and whether at least four Republican senators are concerned enough to join forces with Democrats and demand more disclosures as part of President Trump's trial.

Why it matters: Some White House aides and Republican lawmakers bet that the lack of movement with public sentiment and Senate Majority Leader Mitch McConnell, plus pressure on House and Senate Dems in vulnerable races, would prompt Pelosi to quickly cut bait after the holiday break.

One big question: How does the escalation of tensions and threat of war with Iran after the U.S. killing of Soleimani affect the public's or lawmakers' appetite to extend the impeachment effort?

Look for House and Senate Dems to gauge sentiment in their caucuses in the coming days. Look for Dems to lean on Republican senators like Lisa Murkowski of Alaska, Susan Collins of Maine, Cory Gardner of Colorado, Mitt Romney of Utah, Lamar Alexander of Tennessee, Martha McSally of Arizona, Joni Ernst of Iowa and Jerry Moran of Kansas to press McConnell to agree to some witnesses and documents the White House is so far refusing to release.

Behind the scenes: A source familiar with the White House's impeachment strategy said they don't expect Pelosi to send the articles over this week, but they are "ready to go" whenever she does.

The bottom line: We may not even hear much publicly from Pelosi on the matter until Thursday when she holds her weekly news conference, a leadership aide said. 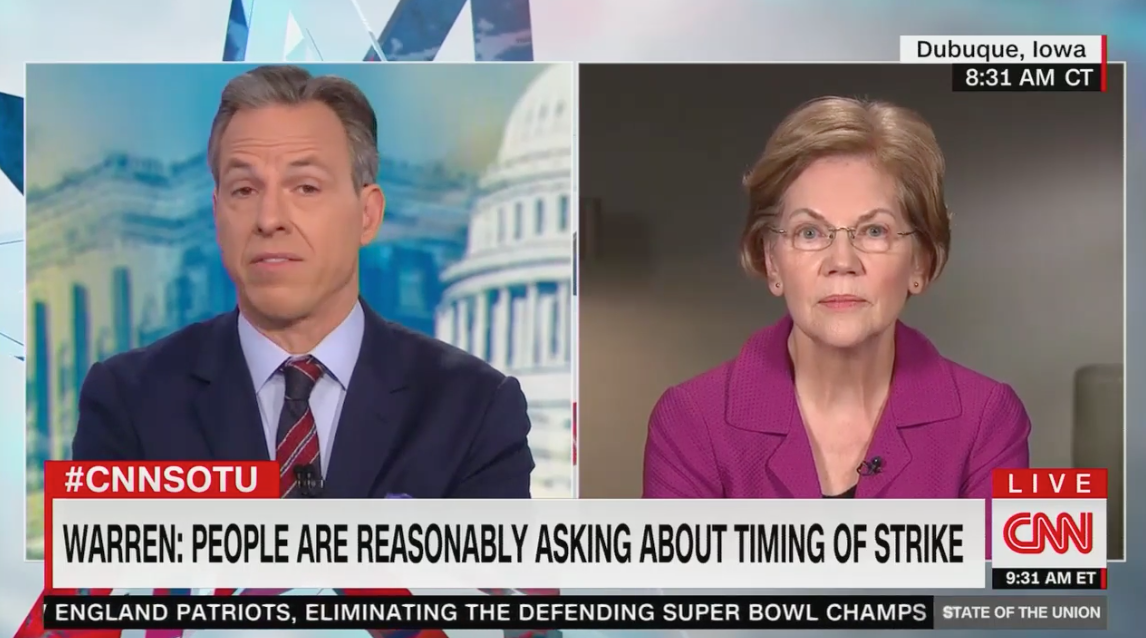 There were some revealing, newsworthy moments in Jake Tapper's interviews today with Secretary of State Mike Pompeo, House Intel Chair Adam Schiff and 2020 Democratic candidate Elizabeth Warren on CNN's "State of the Union."

Warren stopped an inch short of accusing Trump of wagging the dog — in this case, to distract from impeachment — with his killing of Soleimani.

Schiff didn't deny that Democrats might consider still another — third — article of impeachment against President Trump.

And Pompeo evaded repeatedly when pressed on the legality of Trump's tweeted threat of bombing Iranian cultural sites.

The House will consider the PFAS Action Act "to clean up communities affected by PFAS contamination and protect Americans from these harmful 'forever' chemicals, which can cause cancer and other serious health problems," per Majority Leader Steny Hoyer.

The Senate will vote to confirm Jovita Carranza as administrator of the Small Business Administration, per a Republican leadership aide.