Elizabeth Warren is proposing to kill much of the leveraged buyout industry. Not just make meaningful reform or increase regulatory oversight. But treat it like Pennywise treats the schoolchildren of Derry.

Warren is lead sponsoring a bill that would make buyout funds liable for leveraged financing. It also would:

Her intention may be to put more of the equity back in private equity, thus forcing firms to make more responsible investment decisions, but the increased risk profiles and competitive disadvantages would stop many firms in their tracks — and likely end the turnaround industry.

Bottom line: This bill won't become law, despite having several Democratic Party co-sponsors (including Kirsten Gillibrand). But Warren has a megaphone right now, and has shown a deft ability to translate complex financial matters for debate and town hall audiences.

On Monday, Peter Thiel said that Warren was the Democratic candidate who scared him most. Now he's got a lot of private equity company.

🕒 It's Day 6 of Leon Black, CEO of Apollo Global Management, refusing to confirm or deny that his family foundation was the source of a $10 million donation to Jeffrey Epstein's charity in 2015. He can't play out the clock on this, and Apollo shares are down more than 4% on the week.

🎧 Pro Rata Podcast focuses on Elon Musk's efforts to merge man and machine, both to cure neurological diseases and to stay one step ahead of AI. Listen here.

Anheuser-Busch InBev agreed to sell its Australian operations to Japan's Asahi for $11 billion. It also is considering divestitures of its South Korea and Central America businesses.

• FlixMobility, a Germany-based low-cost bus service, raised $531 million co-led by Permira and TCV at a valuation north of $2 billion, per Reuters. http://axios.link/f457

• Submittable, a Missoula, Mont.-based platform for publishers and others to manage submissions, raised $10 million in Series B funding. Next Coast Ventures led, and was joined by return backers True Ventures, Next Frontier Capital and Flywheel Ventures. http://axios.link/fGsA

• Ardian and Macquarie are among those considering takeover offers for Brisa, Portugal’s largest motorway operator, per Reuters. A deal could be worth between €4 billion and €5 billion. http://axios.link/yQ4e

⛽ WildFire Energy I, a Houston-based oil and gas exploration and production company, secured an equity line of over $1 billion from investors like Warburg Pincus and Kayne Private Equity. The company is led by former execs with WildHorse Resource Development, which sold earlier this year to Chesapeake Energy for $4 billion.

🚑 Afya, a Brazilian for-profit medical education company, raised $261 million in its IPO. The company priced shares at $19 (above $16-$18 range) and will list on the Nasdaq (AFYA). Morgan Stanley was lead underwriter. Afya reports $417 million in revenue for the year ending March 31, 2019.

• Medallia, a San Francisco-based customer experience feedback platform, raised $326 million in its IPO. The company priced shares at $21 (above $16-$18 range), for an initial market cap of $2.6 billion. It will trade on the NYSE (MDLA) with BAML as lead underwriter, and reports a $2.6 million net loss on $94 million in revenue for Q1 2019. Medallia had raised over $330 million in VC funding from firms like Sequoia Capital (40.7% pre-IPO stake).

• Brookfield Asset Management is seeking a buyer for the Atlantis Paradise Island Resort in The Bahamas, per Bloomberg. http://axios.link/ESL9

• AT&T (NYSE: T) is considering a sale of its Puerto Rico business, which would fetch around $3 billion, per Reuters. http://axios.link/sUUe

• Investindustrial offered to buy an addition 3% stake in luxury automaker Aston Martin (LSE: AML), which would raise its position to 34%. http://axios.link/GoXQ

• MGM Resorts (NYSE: MGM) is considering a sale/leaseback of Las Vegas properties like the Bellagio and MGM Grand, per Bloomberg. http://axios.link/Qe2Q

• Vodafone India hired Bank of American and Morgan Stanley to find buyers for its fiber assets, which could fetch upwards of $1.9 billion, per Bloomberg. http://axios.link/1fR3

• Bain Capital is in early talks to raise a mid-market buyout fund focused on Japan, per Reuters. http://axios.link/G7dQ

• Hercules Capital announced that interim CEO Scott Bluestein will take the position permanently. He was promoted from CIO following the resignation of Manuel Henrique, who was arrested as part of the “Varsity Blues” college admissions bribery scandal. www.htgc.com 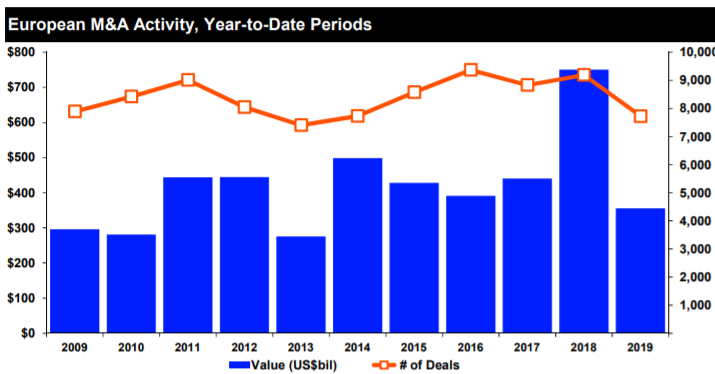 European M&A is at a six-year low through July 18, per Refinitiv.

🙏 Thanks for reading Axios Pro Rata. Please ask your friends, colleagues, and Neuralink cyborgs to sign up here.