Late last year there were reports that Match Group, the owner of popular dating app Tinder, had approached rival Bumble about a possible acquisition for more than $1 billion. Match Group CEO Mandy Ginsberg declined to comment specifically on Bumble during this morning's Q4 earnings call, but did make an intriguing disclosure:

“On the product front, Tinder has been on the cutting edge of innovation since its inception in 2012, inventing the swipe gesture, which has since become this cultural phenomenon of 'swipe right' and 'swipe left' and that is often imitated on mobile products. Tinder also invented the 'double blind opt-in' whereby two users need to 'like' each other before they can message. In fact, these features are so innovative that Tinder was granted a patent in the dating category by the US Patent & Trademark office which we think is valuable."

Axios has located the patent, which does indeed relate to the double opt-in, swipe left/right technology that is now central to mobile dating apps like Tinder, Bumble and others.

• Asset management: The Carlyle Group this morning announced Q4 earnings that beat analyst estimates. It also said that, in 2017, its corporate private equity business was actually smaller — in terms of fundraising, investments and realized proceeds — than its other combined businesses.

• Signing bonus: Online job search site ZipRecruiter has raised around $50 million in Series B funding at a post-money valuation just south of $1 billion, according to multiple sources. It appears to be an insider-led round — IVP led a $63 million Series A in 2014 at a $300 million pre-money — but Wellington Management came on board as a new investor. The eight year-old company declined comment.

• Next act: Lo Toney is listed as a partner on the website of Google Ventures, but he's in the process of raising a fund-of-funds focused on seed funds led by women and/or minority general partners. It's called Plexo Capital, and counts Alphabet among its backers. Once the fundraise concludes, Toney will formally leave GV.

• All hail breaks loose: Travis Kalanick took the stand yesterday in the Waymo vs. Uber trial, while Congress slammed the ride-hail giant for its handling of a 2016 data breach. Read the downloads from San Francisco and from D.C.

George Feldenkreis, the founder of Perry Ellis International (Nasdaq: PERY), and Fortress Investment Group have offered to buy the apparel company for $430 million, or $27.50 per share (18.6% premium to yesterday’s closing price).

• SmartAction, an El Segundo, Calif.-based “omnichannel customer self-service platform powered by AI,” has raised growth equity funding from Staley Capital and TVC Capital. No financial terms were disclosed, but a source tells Axios that the round total was $33 million. www.smartaction.ai

• Placements.io, a Seattle-based provider of automated order-to-cash software for digital publishers and their advertisers, has raised $3.8 million in seed funding. Revel Partners led, and was joined by Vulcan Capital and Alpine Meridian. http://axios.link/FIDq

• Loris.ai, a startup that helps companies have conversations around difficult issues like harassment, has raised $2 million in seed funding led by Floodgate. Other backers include Kapor Capital and LinkedIn CEO Jeff Weiner. http://axios.link/4jdh

• Recommerce Group, a Swedish smartphone reconditioner and reseller, has raised €50 million from Capzanine and Creadev. www.recommrce-group.com

• Warburg Pincus has agreed to invest around $395 million for a 55% stake in the lending solutions unit of Fiserv (Nasdaq: FISV). www.fiserv.com

• TFI TAB Food Investments, a franchisor for Burger King and other quick-service restaurants in Turkey and China, has postponed an IPO that was set to raise upwards of $222 million. It had planned to trade on the Nasdaq under ticker TFIG, with Morgan Stanley as lead underwriter. It reports $2.9 billion in revenue for the first nine months of 2017. http://axios.link/Dt1E

• Houzz, a home remodeling platform that has raised over $600 million in venture funding, has acquired IvyMark, a San Francisco-based provider of business management software for interior designers. IvyMark had been seeded by backers like NFX Guild and Pitango Venture Capital. http://axios.link/CY5x

• Manulife Financial (TSX: MFC) is considering a sale process for many of its U.S. insurance assets, according to Reuters. This reportedly would not include John Hancock, which Manulife also doesn’t plan to float via an IPO. http://axios.link/QbCF

🚑 Ping An Ventures is raising a pair of later-stage healthcare funds with a combined target of $1.3 billion, according to Reuters. http://axios.link/SS8V

• Marc Andreessen won’t stand for reelection to the board of HP Enterprise (NYSE: HPE), which holds its annual shareholder meeting in April.

🚑 Nessan Bermingham, co-founder and former CEO of CRISPR company Intellia Therapeutics (Nasdaq: NTLA), has rejoined Atlas Venture as a venture partner. He originally joined Atlas back in 2002, and later co-founded Intellia with the firm. http://axios.link/nPv8

• Matt Shafer has joined Toronto-based Northleaf Capital Partners as a New York-based managing director. He previously was a partner and head of Americas for Vision Capital. www.northleafcapital.com 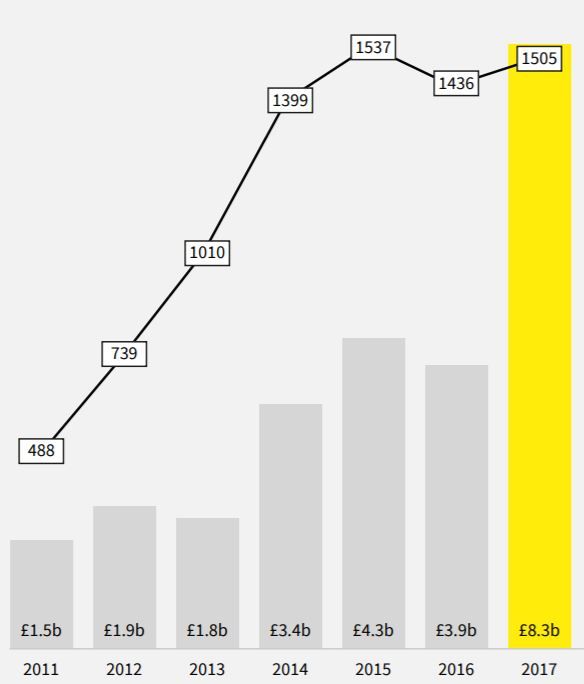 "More cash has been invested in British high-growth companies than ever before, and it’s coming in ever-larger deals... We’re seeing more interest from government in the high-growth ecosystem than perhaps any time in history. This is all particularly remarkable given the gloomy prospects anticipated in the wake of Brexit. Even now, forecasts belie the strength of the high-growth economy – with foreign investment in UK firms at its highest since records began."