The U.S. Food and Drug Administration reportedly plans to roll out new restrictions next week on the sale of non-tobacco flavored e-cigarette pods, including a ban on such products within convenience stores.

• Scooter scoop: On Wednesday we noted how Ford agreed to buy scooter company Spin. Now we've learned from multiple sources that the deal came after Spin had a signed Series B term sheet in hand, for $20 million on a $65 million pre-money valuation, led by New York's Rosecliff Ventures.

"In recent years, however, CFIUS has developed and begun to review transactions involving the acquisition of a U.S. business in close proximity to sensitive US government facilities. Under FIRRMA, CFIUS jurisdiction has been expanded to include any type of real estate transaction in which the property is located within or in close proximity to an air or maritime port, US military installation, or any other property of the US government determined to be related to national security."

• As an aside, I once tried to get a propane tank filled at a local hardware store, but learned the store couldn't do that sort of business because it was next door to a post office.

• Central bankers: The Fed left rates unchanged yesterday and was generally optimistic about the U.S. economy, but did highlight how business investment growth fell from 8.5% in Q2 to just 0.8% in Q3.

• Other bankers: Goldman Sachs is under pressure for new revelations that then-CEO Lloyd Blankfein met with the former Malaysian prime minister and two men accused of laundering/plundering the country's sovereign wealth fund. Blankfein had been referred to anonymously in earlier court documents.

• Stocking stuffers: There are now venture capitalist trading cards. Be sure to give them to that special someone who you really just want to leave you alone.

🎧 Pro Rata podcast: I speak with incoming Congresswoman Jennifer Wexton, one of the dozens of Democrats who flipped a House seat on Tuesday night, about what what's next for economic and tech policy. Listen here.

Apollo Global Management has been invited to re-bid for the auto battery business of Johnson Controls (NYSE: JCI), which had been thought to have around a $14 billion deal in place with Brookfield Asset Management, according to the WSJ.

• Turvo, a Sunnyvale, Calif.-based collaborative logistics platform, raised $60 million in Series B funding. Mubadala Ventures led, and was joined by G2VP and Next47. http://axios.link/lCjx

• Plus One Robotics, a San Antonio-based provider of 3D vision and control systems for robotic automation, raised $8.3 million in Series A funding. Pritzker Group Venture Capital led, and was joined by Zebra Technologies. www.plusonerobotics.com

• Spinny, an India-based online used car marketplace, is in talks to raise between $10 million and $15 million from Accel and Sequoia Capital, per DealStreetAsia. http://axios.link/NFSl

• Apollo Global Management has been invited to re-bid for the auto battery business of Johnson Controls (NYSE: JCI), which had been thought to have around a $14 billion deal in place with Brookfield Asset Management, according to the WSJ. Apollo’s initial bid had been for around $13 billion, but the firm “stopped its work on the deal when it became clear that Brookfield had won the auction.” http://axios.link/jar8

🚑 CVC Capital Partners and PAI Partners are among those short-listed in the auction for Bristol-Myers Squibb's (NYSE: BMY) French OTC business, per Reuters. Also on the list are German drugmaker Stada and Italy’s Angelini. http://axios.link/DhW6

• Legacy Housing, a Bedford, Texas-based mobile home maker, filed for a $69 million IPO. It plans to trade on the Nasdaq (LEGH) with B Riley FBR as lead underwriter. The company reports $19 million of net income on $127 million in revenue for the first nine months of 2018.

🍔 TFI TAB Food Investments, a franchisor for Burger King and other quick-service restaurants in Turkey and China, withdrew registration for a $222 million IPO. The company, which reported $2.9 billion in revenue for the first nine months of 2017, had originally postponed the offering back in February, and had planned to list on the Nasdaq.

• Allstate (NYSE: ALL) is exploring a sale of its fixed-annuities business, which has a book value of between $4 billion and $5 billion, per Bloomberg. http://axios.link/c0PK

• Plantronics (NYSE: PLT), a Santa Cruz, Calif.-based maker of Bluetooth earpieces and headsets, is exploring a sale, according to Reuters. It has a market cap of around $2.5 billion. http://axios.link/fzia

• Weimeizi, a Chinese maker of consumer dental products, is being circled by Colgate-Palmolive (NYSE: CL), Unilever (LSE: ULVR) and Church & Dwight (NYSE: CHD), per the South China Morning Post. A deal could be valued at up to $1 billion. http://axios.link/yIjH

• M13 Ventures, a Los Angeles-based firm focused on consumer products startups, is raising up to $150 million for its second fund, per an SEC filing. www.m13.co

• Revolution Ventures is raising up to $200 million for its third fund, per an SEC filing. www.revolution.com

• Teamworthy Ventures of New York is raising up to $80 million for its second fund, per an SEC filing. www.teamworthy.com 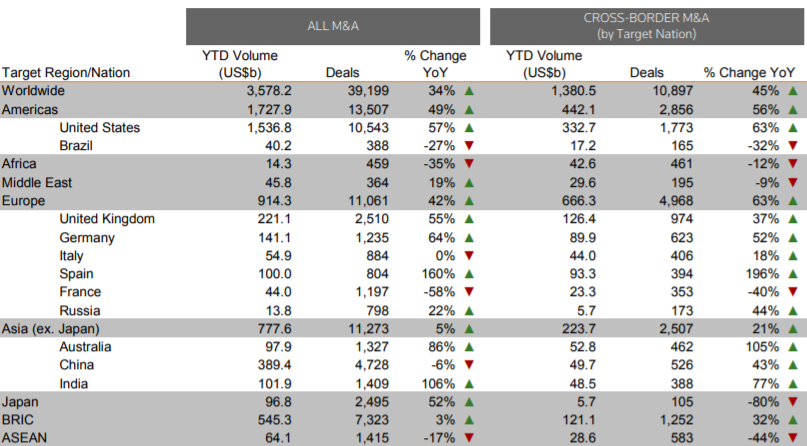