International investors poured more money into Chinese stocks last month than in any month on record, representatives from the Institute of International Finance tell Axios.

Why it matters: The portfolio flows show investors outside of China have shaken off data reports showing the country's growth grinding to its slowest pace since 1990 and are swooping in as stock prices and valuations have tumbled.

Nancy Tengler, chief investment strategist at Tengler Wealth Management, said in December that she's expecting that stimulus to boost not just China, but markets around the globe this year.

Of note: China opened up mainland, or so-called A-shares, to outside investors last year but still has a number of restrictions on foreign investment.

Chinese markets are closed this week as the country celebrates its new year holiday.

Inflows from foreign investors to China have dwarfed other emerging markets in the first quarter over the past 3 years. In Q1 or 2017, 2018 and 2019, funds invested in Chinese stocks has totaled more than $40 billion. The next closest country is Korea, with $23.5 billion.

2. An asterisk on January's jobs report

Why it matters: Economists suspect that the 60.7% hit rate on the establishment survey from the 142,000 businesses and government agencies typically surveyed could mean a downward revision to the whopping 304,000 new jobs added in January.

December's initial response rate came in at 61%, but the follow-up survey's response rate ticked up to 88%. That led to a significant downward revision of December's payrolls from an initially reported 312,000 to 222,000.

The big picture: Barring an unprecedented downward revision, January will be the 100th consecutive month of U.S. job growth. Even with December's downward revisions, payrolls remain solid, but the markdowns show the data may not be breaking out the way initial estimates suggest.

Consumer expenditures in Africa are expected to rise to $2.1 trillion by 2025 and $2.5 trillion by 2030, more than doubling the 2015 level, according to a recent study from Brookings Institute.

Why it matters: Brookings' Landry Signé notes that African consumer purchases are some of the fastest-growing in the world and will be lifted further by a burgeoning middle class.

By next year, Signé expects more than half of all African households to have some discretionary income. In the 5 largest consumer markets — Nigeria, Egypt, South Africa, Morocco, and Algeria — the African Development Bank estimates there will be 56 million middle-class households with disposable incomes of nearly $680 billion.

African consumers who are considered "better off than middle class," according to OECD standards, are expected to spend an additional $174 billion per year over the same period.

But, but, but: Debt is a serious issue. Many of these countries are reliant on commodities, which may lose value as global growth slows, and many have never shouldered such a high level of debt.

4. The Swamp is winning 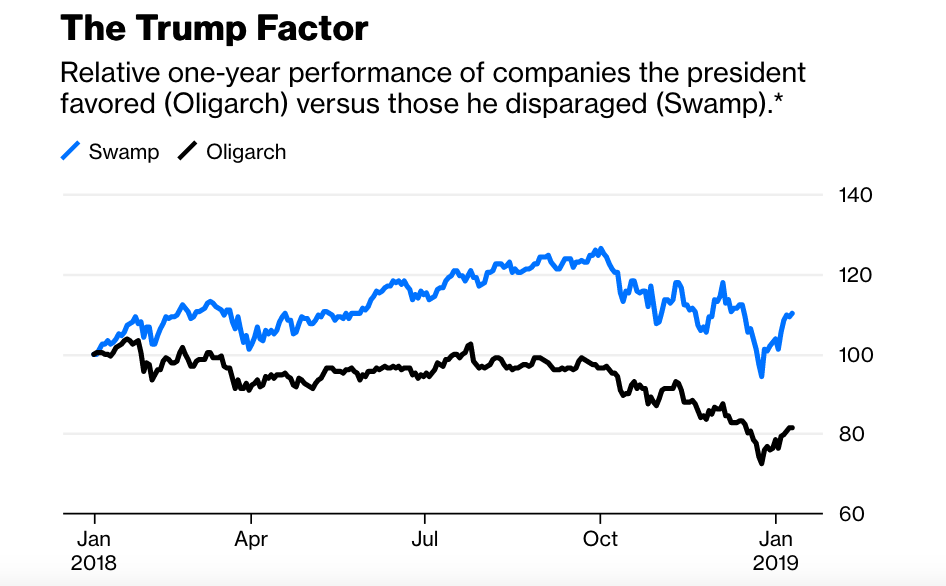 A chart from Bloomberg showing the performance of the so-called Swamp and Oligarch indexes that track companies President Trump has criticized and championed.

It pays to be on the president's bad side. At least it has for public companies over the past two years, a pair of indexes created by Ritholtz Wealth Management CIO Barry Ritholtz show.

President Trump has broken with past presidential precedent and heaped both praise and disparagement on a collection of U.S. companies since taking office. Ritholtz tracked the stock performance of companies relative to their relationship with the president.

"Having the U.S. president get angry with you, call you out publicly and make scary sounding threats at you — well, it turns out to be not so bad. In fact, the results are really good.

"And the companies he embraced? Well, not so much."

The relative performance of the indexes likely has more to do with who Trump likes than whether or not he goes after them on Twitter, Ritholtz said.

The Oligarch index, meanwhile, had some disasters.

"All told, it was a rough year for the Oligarchs," Ritholtz said, "with little other than huge tax cuts to comfort them."

Global chip sales rose nearly 14% last year to a record $468.8 billion, according to new numbers from the Semiconductor Industry Association. However, growth slowed significantly in the second half as the industry enters what appears to be a period of slower growth, Axios' Ina Fried writes.

Why it matters: Chips are at the heart of all manner of electronics, from phones and PCs to broader markets like cars and appliances.

Plus, unlike the gear they end up in, a significant number of semiconductors are not only designed in the U.S. but also manufactured here. Chip sales growth is seen slowing to just 2.6% this year, according to the World Semiconductor Trade Statistics organization.

The big picture: Major chipmakers like Skyworks, Qorvo, Qualcomm and Micron all had forgettable stock performances in 2018.

An Axios analysis shows semiconductor stocks were embroiled in a sector-wide slowdown last year. An exchange-traded fund tracking the industry fell 14% and a number of semiconductor companies had losses of more than 20%.

The bottom line: If semiconductor companies' shares struggle this mightily during a year of record sales, a slowdown could be a real problem.

History: Caryn Elaine Johnson was raised in New York's Chelsea-Elliott housing projects and eventually made her way to Broadway where she starred in her own show. That eventually landed her starring roles in television, film, music and movies.

She is known professionally as Whoopi Goldberg.