1 fun thing: I'll be in Washington, D.C., on Wednesday for the annual Investment Company Institute membership meeting. (SEC Chairman Jay Clayton will be there!)

Left for dead in the aftermath of the global financial crisis, collateralized debt obligations (CDOs), one of the most notorious agents in the collapse of the financial system, are starting to gain favor again on Wall Street.

Details: Christopher Whittall of International Financing Review reports, "Trading volumes in synthetic collateralised debt obligations linked to credit indexes are up 40% this year, according to JP Morgan, after topping US$200bn in 2018 on the back of three years of double-digit growth. Meanwhile, analysts predict more than US$100bn in sales of bespoke synthetic CDOs in 2019 following an estimated US$80bn of issuance last year. "

What's happening: Since 2009, after the Fed began its quantitative easing program, investors have piled out of bonds and into riskier assets in an effort to replicate returns of the past. Portfolio managers have tried buying stock options, investing in hedge funds, private equity and alternatives. CDOs look to be the latest pick.

Yes, but: Today's synthetic CDOs are largely free from exposure to subprime mortgages, which drove much of the carnage in the crisis. Most are credit-default swaps on European and U.S. companies, and amount to bets on whether corporate defaults will increase in the near future.

The bottom line: "We are still at such a low level that this is not a worry at this stage," Deutsche Bank chief economist Torsten Slok tells Axios, "but we are indeed monitoring it carefully given the role synthetic CDOs played during the crisis."

What's happening: The real estate sector became the largest industry in the country in terms of value added to GDP during that 10-year period, growing 22.1%.

Go deeper: In addition to changes in the way Americans earn money, the survey also noted some profound shifts in American households.

All of this is leading to a shrinking average household size, meaning fewer wage earners per household, and a smaller median household income.

The continued strength of the dollar has been a headwind for U.S. businesses and it may begin to put a major strain on economies outside of the United States.

Where it stands: The share of debt issued by emerging market countries in dollars rose to an all-time high in the first quarter, data from the Institute of International Finance shows. If the currency trend doesn't change soon, countries already struggling with weakness at home will find themselves in serious trouble when these bonds need to be repaid.

Why it matters: The weakness in EM currencies suggests the market is still worried about the global economy, despite strong and steady economic readings from the U.S. and improvement in China.

The big picture: EM's problem children, Argentina and Turkey, have seen their currencies fall by around 13% and 9% against the dollar so far this year, after record losses in 2018. Both are experiencing recessions and analysts worry that defaults in 1 or both countries are on the horizon.

The bottom line: Emerging market economies now make up 60% of global growth. Their health is imperative for the world economy to continue moving forward, and the dollar's strength has been weighing on it.

Money flowed strongly into mutual funds and ETFs of all kinds except for equity funds last week. According to the most recent data from Lipper, equities saw $7.3 billion of outflows, the only asset group it tracks to see money pulled out of funds.

Why it matters: Despite the run in U.S. stocks, data shows that real money investors have been selling for most of this year. That trend continues even during what should be bouts of exuberance.

5. A lesson in social media brand management from Chase 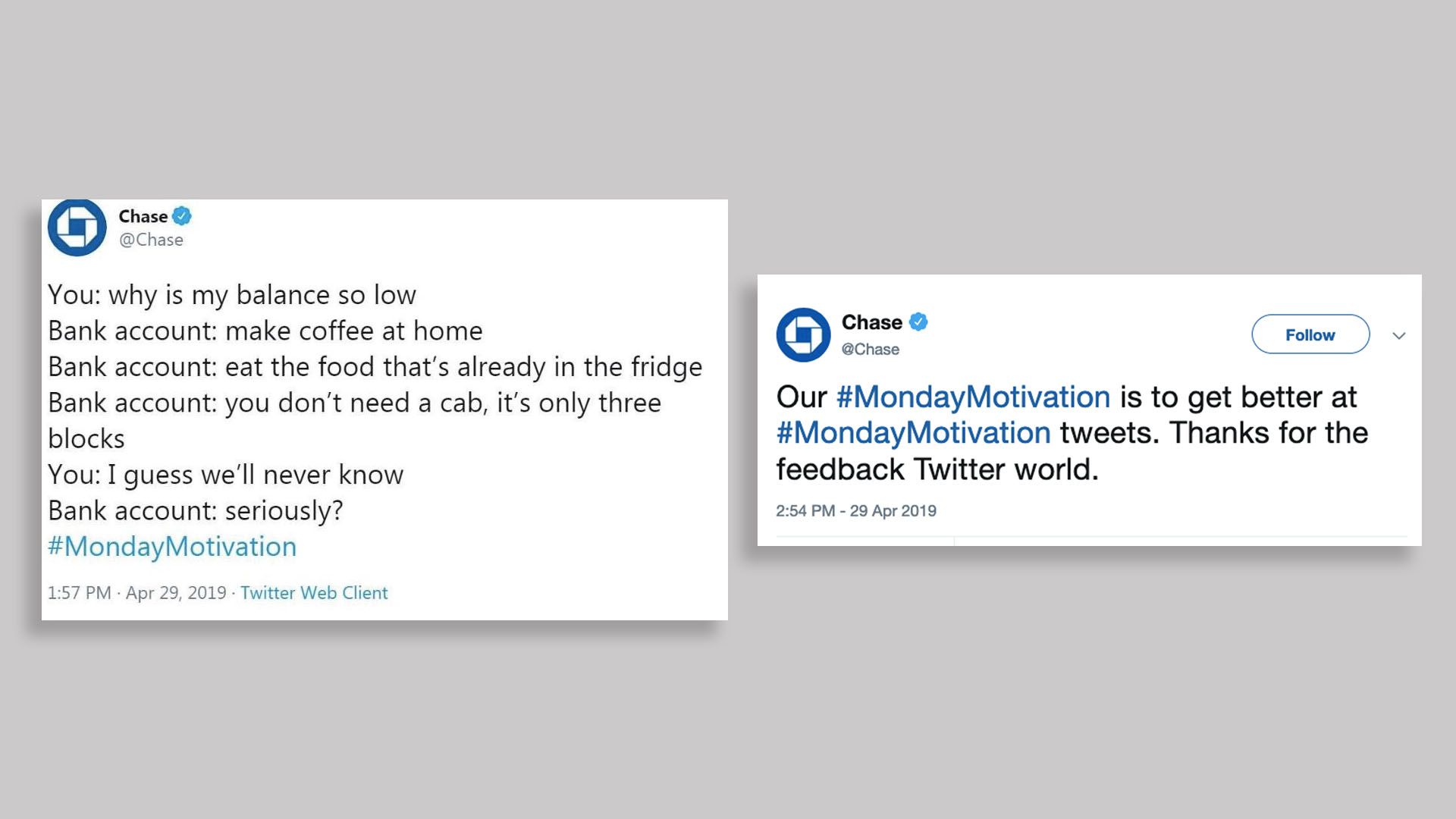 Everyone took time out of their day to dunk on Chase yesterday after the bank's social media team issued an ill-advised tweet at 1:57pm mocking people who have low account balances.

Politicians like Sen. Elizabeth Warren weighed in that taxpayers who had lost their homes, jobs and life savings had provided Chase a $25 billion bailout. Traders took aim at bad Chase bets that cost significantly more than coffee or cabs. Others just pilloried the company for "shaming" the poor.

Chase took the tweet down at 2:25 p.m. and issued another one at 2:54pm It was not well received either.