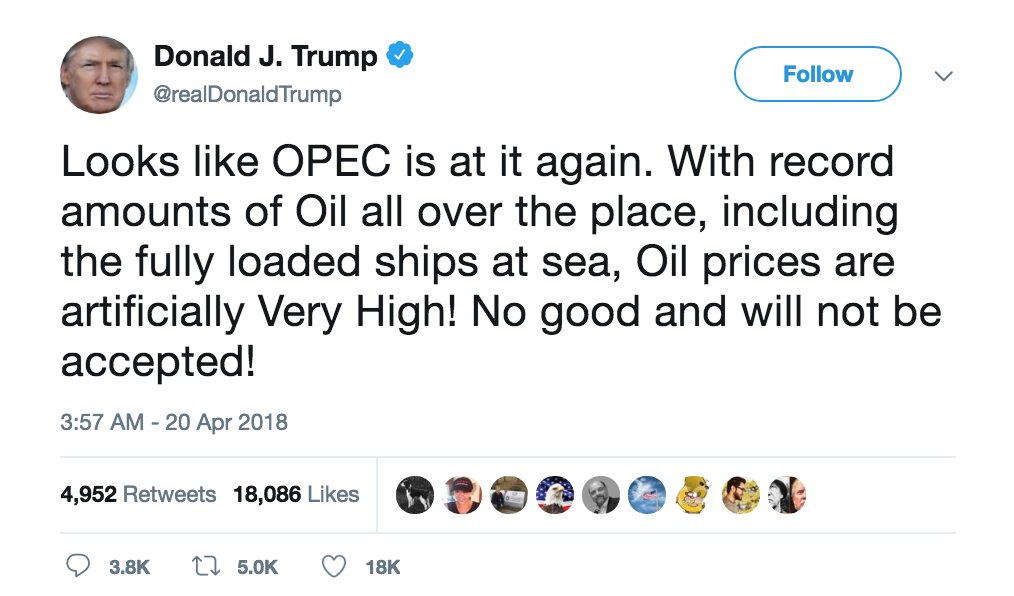 President Trump this morning via Twitter lambasts OPEC for making oil prices "artificially Very High" — a tweet which hit shortly after a monitoring committee OPEC meeting today and likely in a reaction to oil prices trading at their highest level in three years.

Reactions from OPEC, via reporters covering the meeting (lightly edited):

Why it matters: Trump's tweet, while vague, appears to show the president directly attacking OPEC's work with Russia to limit production as the cartel seeks to tame the global crude oil glut. Trump's comments arrive after a Reuters report said Saudi Arabia is aiming to get prices up to $80–$100 per barrel.

New pledge: HSBC, one of the world's biggest banks, announced Friday that it will no longer finance construction of new coal-fired power plants, expanding on earlier restrictions laid out in 2011.

Why it matters: The Financial Times, which first reported the news, sums it up well: "[T]he move by Europe’s biggest bank underlines the mounting pressure from investors and regulators for lenders to step up their response to climate change."

Quoted: “We recognise the need to reduce emissions rapidly to achieve the target set in the 2015 Paris Agreement to limit global temperature rises to well below 2 degrees Celsius and our responsibility to support the communities in which we operate," Daniel Klier, the bank's global head of strategy and sustainable finance, said in a statement.

Yes, but: HSBC said Bangladesh, Indonesia and Vietnam would be exempted from the coal policy in cases where "no reasonable alternative" is available, a carve-out designed to "balance local humanitarian needs with the need to transition to a low carbon economy." 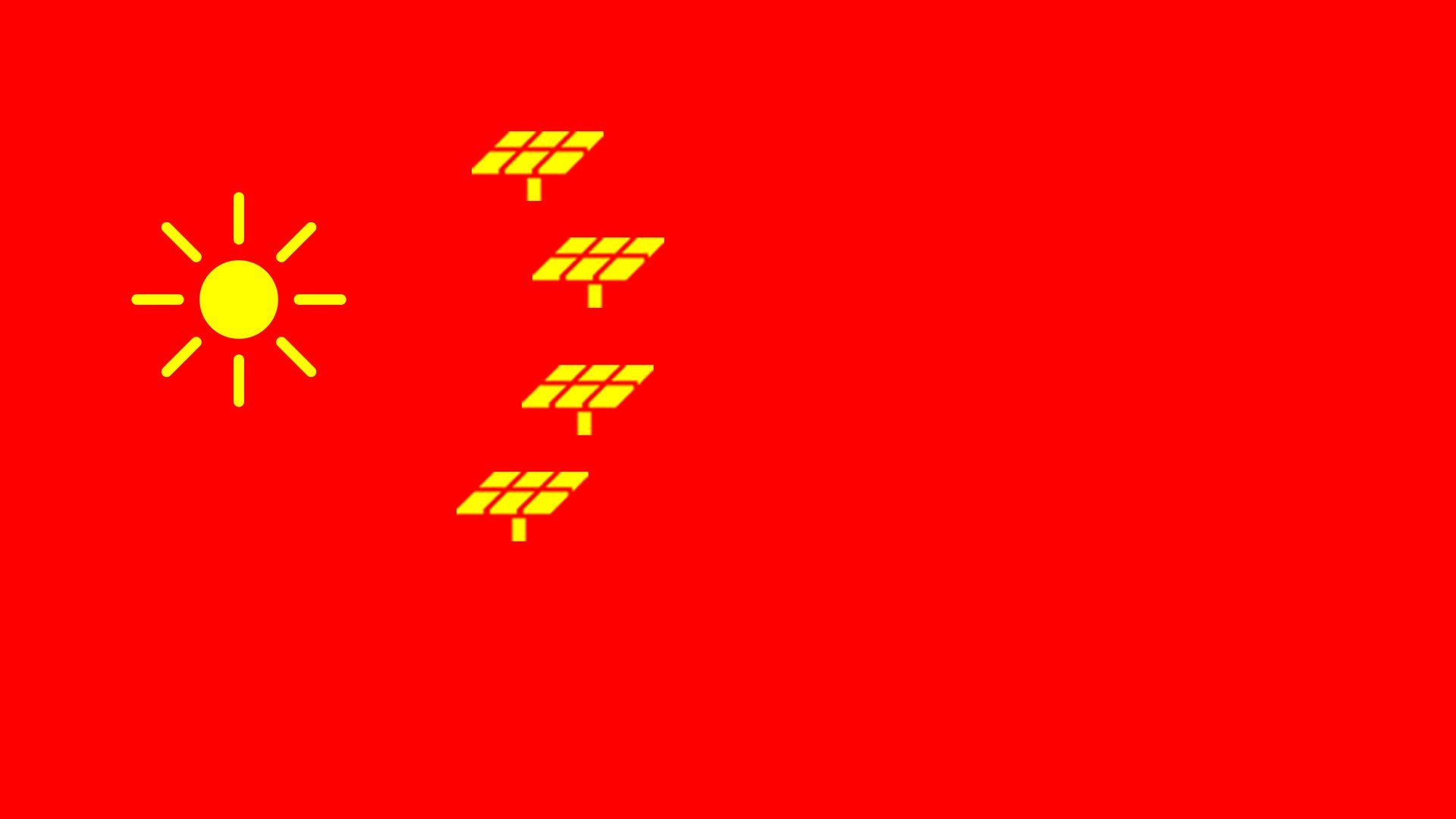 My colleague Amy Harder reports that competition in the global solar industry is ramping up in the wake of Trump imposing tariffs on panel imports earlier this year.

Why it matters: Before the administration issued the tariffs, most of the American solar industry predicted it would hurt U.S. solar jobs, many of which are based on installing cheap solar panels from places like China.

On the record: Two interviews with top executives at American and Chinese solar companies offer a glimpse at their positioning to thrive amid the tariffs. Here's an excerpt from her discussion with Tom Werner, CEO of SunPower, which is based in California but majority owned by French oil and gas company Total:

Q. SunPower just announced it’s acquiring SolarWorld, one of the solar manufacturers that petitioned for the tariffs. Couldn’t one argue the tariffs are having the intended effect, to encourage U.S.-based manufacturing?

"I’ll answer that and say yes. This [SolarWorld purchase] is catalyzed by the tariffs and by the administration’s desire for American solar manufacturing. It was my concession and SunPower board agreed with me, that it was appropriate for us to take a leadership position and swim with the current with the administration."

Q. Are you worried Chinese companies are going to innovate or circumvent to blunt the impacts of these tariffs on their panel products, as they have done in the past?

"Only the paranoid survive. SunPower is very paranoid. We need to run like hell and innovate."

Click here for the whole story in the Axios stream.

Scott Pruitt saga: Per NYT, "Some of the most reliable conservatives in Congress are starting to speak out against Scott Pruitt, the chief of the Environmental Protection Agency who is now facing a barrage of ethics and spending questions."

Over in our Expert Voices section, University of Chicago's Dali Yang sizes up a major move by China's government. Here's an excerpt...

What's happening: This week China formally inaugurated its new Ministry of Ecology and Environment (MEE) to replace the Ministry of Environmental Protection. The MEE consolidates regulatory functions that were spread over seven or eight different ministries and administrations.

Why it matters: The fragmentation of regulatory authority is a major reason China has struggled to combat the severe environmental degradation that has attended its rapid economic rise. The consolidation, part of a larger government reorganization announced in March, aims to address that deficiency by making the Chinese government more coherent and effective.

Yes, but: Despite its more centralized authority, the MEE will still have to contend with a broader political environment characterized by comparatively weak laws and inadequate legal institutions.

Click here for the whole piece in the Axios stream.

New tally: Analysts from the think tank Resources For the Future have a new look at a regulation Trump wants to kill — Interior Department rules to cut emissions of the potent greenhouse gas methane from oil-and-gas development on federal lands.

The bottom line: The effect of killing or keeping the rule rests on whether the social cost of methane (SC-CH4) — a metric of damages expected from additional pollution — is tallied domestically or globally.

Unpacking BP's pledge: A post over at the Environmental Defense Fund examines BP's pledge to curb methane releases from their projects. The company's wider report this week on climate efforts sets a methane intensity target of 0.2%.

The big picture: Oil majors are promoting gas to help address climate change, thanks to its smaller CO2 output than other fossil fuels. But methane emissions erode some of that advantage.

Why it matters: FES has been in the news a lot because they...

Yes, but: The exact scope of Akin Gump's lobbying isn't clear. The filing says they're working on "issues related" to the bankruptcy and "potential deactivation of power plant." Akin Gump lobbyists and FES did not comment.

A few recent registrations of note...

Mining: Coal giant Peabody Energy has retained Capitol Tax Partners for work on the effect of the tax overhaul on international companies.

Ozone layer and climate: The Alliance for Responsible Atmospheric Policy has tapped the CGCN Group for work on ratification of the Kigali Amendment to the Montreal Protocol.

Watch this space: Q1 lobbying expenditure reports are just rolling in, so I'll report on some of the highlights next week when more show up.