Good morning from D.C., where everything feels quiet amid the ongoing government shutdown and all of the snow we just got. But we are still going at Axios (and global warming is still real).

My latest column bucks the conventional wisdom on how climate change should unite the world. I'll share that and then Ben Geman will get you up to speed on the rest of the news.

Sure, we all share this one planet. But the warming Earth is poised to divide — not unite — us.

The big picture: One cornerstone of the 2015 Paris Climate Agreement is that nations have a shared responsibility to address global warming. But the reality is that climate change won't affect everyone the same way.

Driving the news: 2 reports out last week show the uneven effects of a warming world and a transition to cleaner energy sources. Certain regions, particularly those with economies based on fossil fuels, are set to lose under the Paris deal while others, particularly China, are poised to gain.

Saudi Arabia, for example, says the impact on their nation is heavy. In an interview at the conference with Carbon Brief, Saudi climate negotiator Ayman Shasly said...

“[W]e are impacted by climate change, perhaps more than anybody else. We are a desert country that heavily relies on this single source of income. We have such a vulnerable economy, fragile economy, and with oil, we eat, we feed, we travel, we educated our people, we have medical care and everything.”

Given that some low-lying island nations are projected to literally disappear beneath rising sea levels within 80 years thanks to emissions from other nations’ fossil fuels, including Saudi oil, that statement may seem like an unconvincing thing to say.

Yes, but: Actually, Shasly has a point.

That report found 2 regions — Australia and the nations in the OPEC cartel, including Saudi Arabia — would be worse off under the Paris deal in 2030, in part because they’re big fossil-fuel exporters. All other regions, including China and even Russia, would be better off.

Drill down for the rest in the Axios stream.

Geisha Williams left her position as CEO of PG&E, which faces billions of dollars in wildfire liability costs and this morning initiated steps to file for bankruptcy at the end of the month, Axios' Courtenay Brown reports.

Why it matters: It's another sign that the company is in crisis-control mode as California lawmakers decide whether it should step in to help PG&E. Williams became the first Latina CEO of a Fortune 500 company in 2017 when she took the helm.

The big picture: Courtenay and Axios' Andrew Freedman have a new piece this morning that explores PG&E's crisis — and why it's a warning to other power companies and businesses around the country.

PG&E could be on the hook for billions of dollars in liability costs related to last year and the prior year's wildfires, far more than its insurance would cover. The Camp Fire may have been triggered by a spark from PG&E's power lines.

Driving the news: California is one of the few states that hold utilities liable for damages tied to their equipment, even if the companies were in compliance with the state's safety rules.

Why you'll hear about this again: The rest of the U.S. is increasingly feeling the effects of climate change, from the Gulf Coast, where the Florida Panhandle was hit by its strongest hurricane on record just last year, to New England, where Boston observed its highest water level on record in 2018. 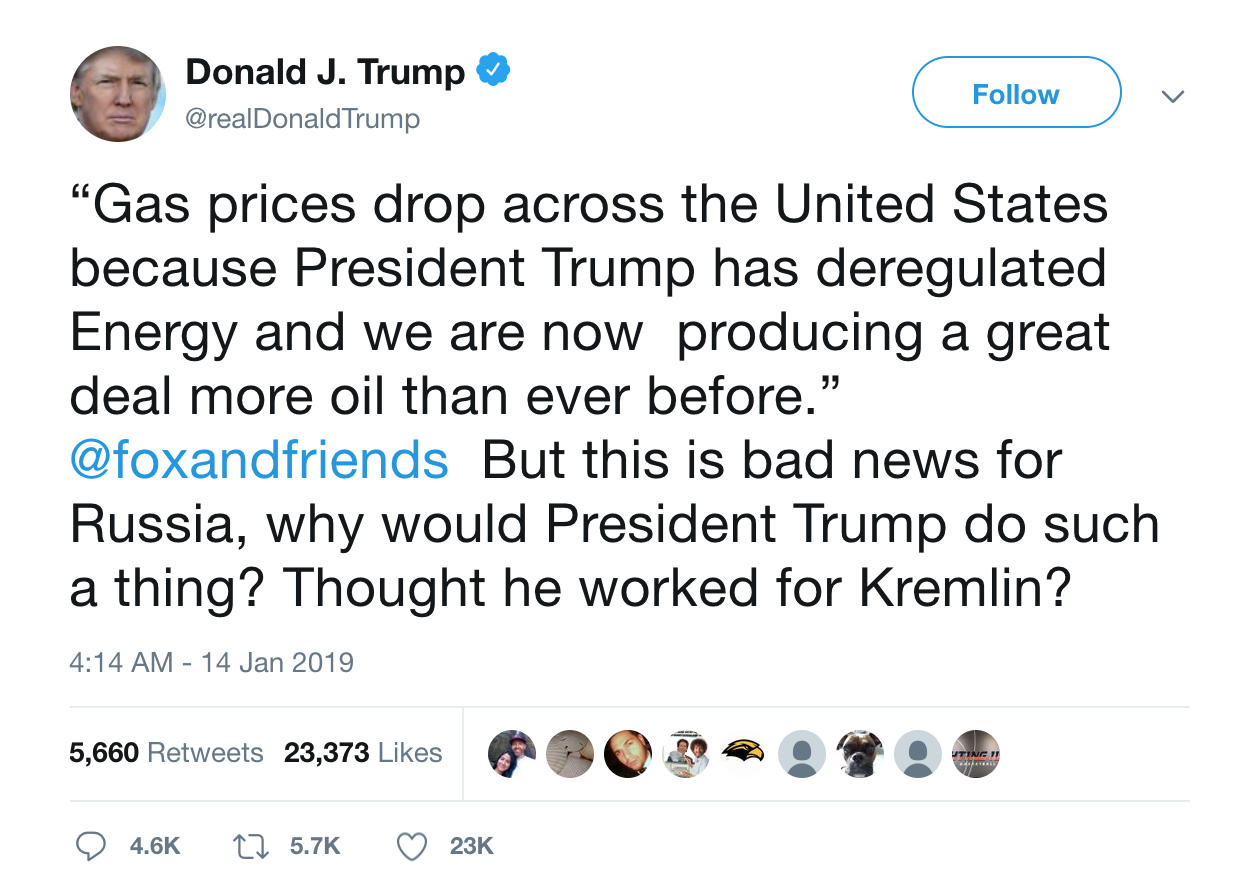 President Trump is wielding the U.S. oil production boom and low gasoline prices as a shield against criticism over his relationship with Russia as Robert Mueller continues his probe and Democrats ramp up their inquiries.

My thought bubble: Russia doesn't need high oil prices as much as some other petro-states, notably Saudi Arabia. And Trump's tweet this morning is claiming way too much credit for U.S. crude oil output and gasoline prices, which currently average around $2.25 per gallon.

But, but, but: Trump can, however, claim a measure of credit for pushing the Saudis to boost output last year, which put downward pressure on prices.

Congress: Acting EPA Administrator Andrew Wheeler is slated to appear Wednesday before the Senate Environment and Public Works Committee, which is vetting his nomination to formally head the agency.

Electric vehicles: The Detroit Auto Show is this week, and so look for automakers to offer more information about EV plans and concepts (more on that below).

What's new: Justice Democrats, which recruited AOC, and the Sunrise Movement plan to begin the campaign in March, a Sunrise spokesperson tells Alexi.

Why it matters: The plan laid out in broad terms Sunday night signals how advocates of the sweeping climate and economic proposal hope to ensure it's in the bloodstream of the 2020 White House race.

What they're saying: "We're making it clear any politician who wants to run for federal office needs to support GND and not take fossil fuel money," Sunrise founder Varshini Prakash said on a call with reporters and activists Sunday.

Where it stands: A Sunrise spokesperson told Axios last week that the campaign has already been meeting with the campaigns of some 2020 White House hopefuls.

One big thing to watch going forward is how the activists groups, and its allied think tanks and lawmakers, begin to propose more specifics around what's now a broad set of ideas.

Why it matters: It follows Friday's announcement that the luxury Cadillac division will be at the forefront of GM's EV strategy.

What we don't know: Details about the new model, including the price and where it will be built, have not yet been revealed.

Axios' Joann Muller had more Friday on GM's plan to pour more resources into electric cars. Take it away Joann...

Where it stands: GM appears to be serious about their zero-emissions vision — the company is shifting 75% of its powertrain engineers from internal-combustion engines to electrics development as it prepares to unleash of wave of EVs under the Cadillac brand.

The big picture: GM CEO Mary Barra has laid out a blueprint for shifting to electric and self-driving cars — a world, she says, with "zero crashes, zero emissions and zero congestion."

What's happening: In a meeting with investors Friday, GM shared more details about its next generation of EVs — 20 EV or fuel cell powered models to be released by 2023.

Tesla: The electric car and solar company has added Steptoe & Johnson to its lobbying team, a newly available filing shows.

Ford: Via CNBC, the company is preparing to launch new EVs next year.

Startups: Per Reuters, "Some 250 startups involved in some aspect of electrification have attracted more than $20 billion in venture capital, notably from a broad array of corporations across multiple industries, according to a Reuters analysis of publicly available data."