Tomorrow marks the 1975 release of Neil Young's sad and harrowing masterpiece "Tonight's The Night," so it provides today's intro tune ...

1 big thing: What to watch as OPEC meets

With OPEC heading into a pivotal meeting in Vienna this week, I'll share part of an interview I did with a smart cartel-watcher, including her thoughts on a pivotal dynamic to watch — Russia and Saudi Arabia.

What the Saudis want: Ellen Wald, president of Transversal Consulting, says the meeting's outcome is "pivotal" for the future of the Saudi-Russian alliance — and by extension the broader OPEC/non-OPEC group — on market cooperation.

On Aramco: Wald does not believe the meeting will offer much insight into Saudi Arabia's hazy plans for the IPO of state oil giant Aramco.

On U.S. influence: Wald says an agreement to boost output will not reflect the influence of the White House, despite President Trump's public pressure on the cartel to boost production, but rather calculations about the market for additional barrels.

Crystal ball: Wald predicts the meeting will yield plans for a production boost in the 300,000 to 600,000 barrel per day range.

Back in Washington: Bloomberg takes stock of efforts to dust off legislation that would go after OPEC with U.S. anti-trust laws — a bill rattling around Congress for almost two decades commonly called "NOPEC."

Behind the scenes in Vienna, part 1: The Wall Street Journal cautions that despite outward signs of discord, the meeting will yield a successful Saudi-Russian push to boost output despite dissent from Iran and some others.

The underlying politics: Here's an interesting observation from yesterday's note by Hedgeye's Joe McMonigle (who by the way expects the meeting to yield a 300,000–500,000 barrel per day increase). He argues that the Saudis are teaching a "master class on managing competing political objectives."

Behind the scenes in Vienna, part 2: Per Reuters, Harold Hamm, CEO of U.S. shale powerhouse Continental Resources, has scuttled his planned appearance at an OPEC event.

Scoop: Voyage, the autonomous vehicles startup, is bringing on Drew Gray — an industry vet who was a senior self-driving engineer at Tesla, Uber and elsewhere — as chief technology officer.

The company is focusing on providing taxi and fleet services by grafting its self-driving technologies onto existing vehicles.

Voyage's system equips Chrysler Pacifica Hybrids, which drive on electric power for about 30 miles, to be autonomous, and later it plans to move into pure electrics, Oliver Cameron, Voyage's CEO, tells Axios.

The context: Cameron says he first collaborated with Gray at Udacity, the online learning provider — Cameron was head of the self-driving program there, and Gray agreed to teach a course.

"Looking back at some of our earliest emails in 2016, it’s easy to see why we wanted to work with Drew at Voyage. He embodies the mentality of a teacher, something so crucial as a CTO. Not only did Drew lead by example while moving so fast, but he made sure everyone learned something along the way," Cameron says.

One reason it matters: The rise of driverless cars and ride-sharing are important drivers of vehicle electrification, as most car companies currently plan to merge the technologies in their new vehicles.

The context: That's Walker speaking on the new episode of the Columbia Energy Exchange podcast. He's responding to criticism of brewing administration plans to aid economically struggling coal-fired and nuclear power plants — facilities the administration claims are vital to the resilience of the power grid in the face of cyberattacks and other potential threats.

Why it matters: The comment shows how DOE is positioning itself at a time when many critics from various quarters say the potential aid is unneeded and accuse the administration of grafting a new post-facto rationale onto their longstanding goal of saving coal plants.

Axios intern Henrietta Reily reports ... The U.S. took a back seat in pursuing renewable energy goals through federal policy after announcing plans to pull out of the Paris Climate Agreement last year, but a survey published by the nonprofit American Council on Renewable Energy (ACORE) found that confidence in the sector remains high among investors.

Where it stands: Surveying financial firms that make up a third of annual renewable energy investments nationwide, ACORE found that two-thirds plan to increase their investments in U.S. renewables by 5% or more in 2018 when compared to 2017.

Yes, but: The same survey shows that various policy and market changes — such as expanded state-based renewables standards, easing siting and permitting procedures, carbon pricing and tax credits for energy storage — could drive much more growth.

What's next: ACORE is using the survey's results to launch a new campaign to spur investment in renewable energy and grid modernization technologies — with a target of $1 trillion in private sector investments by 2030.

"The evidence is (and we see this in our membership growth) that more financial institutions see renewables as a good asset class because they have been shown to provide steady and predictable returns." 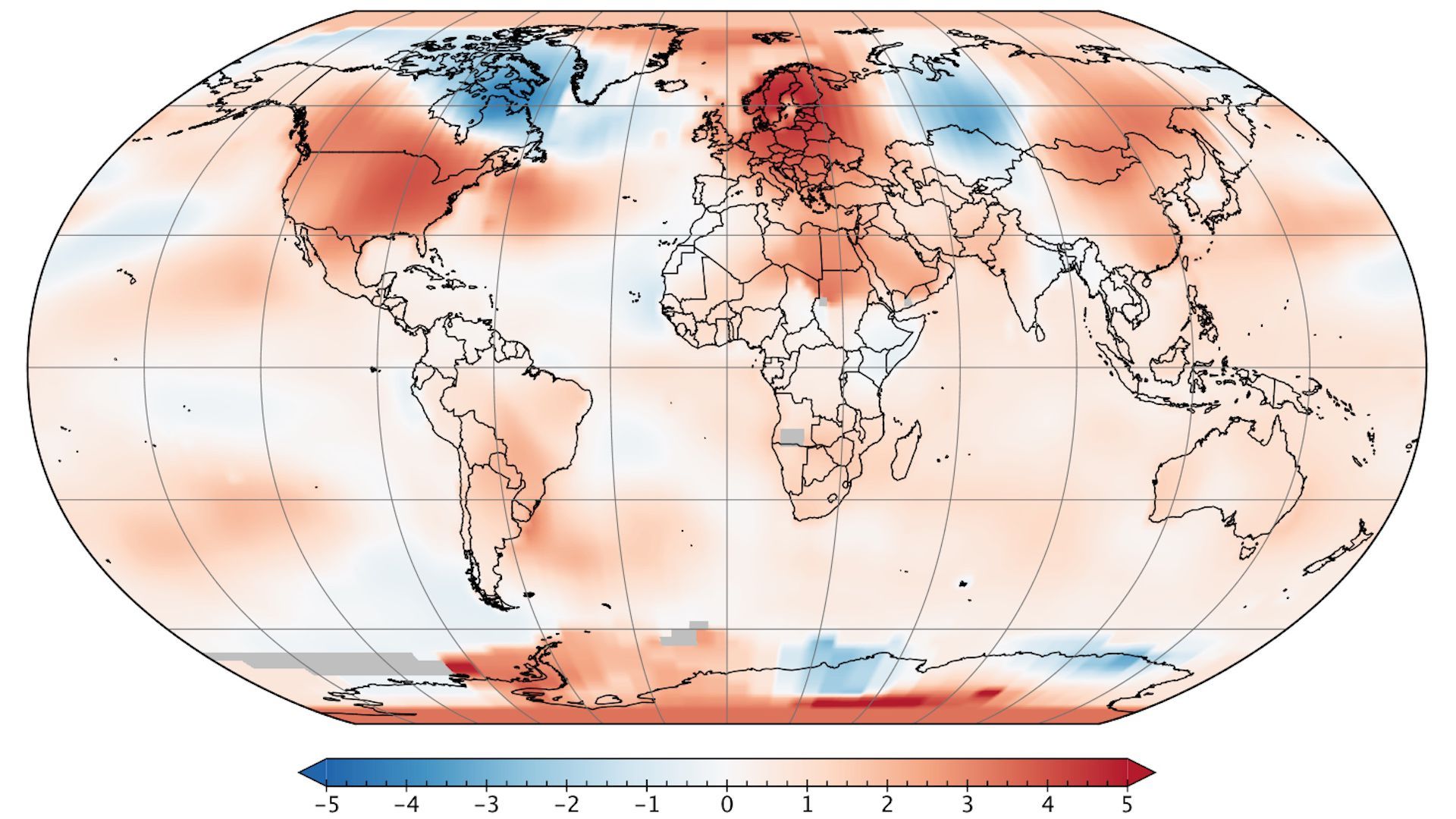 Temperature anomalies in degrees Celsius for May 2018. Credit: NASA/GISS.

Axios' Andrew Freedman reports ... May was the fourth-warmest such month on record, according to NASA, NOAA and the Japan Meteorological Agency. In addition, NASA found that spring in the Northern Hemisphere was the third-warmest such period on record, since instrument records began in 1880.

Why this matters: The monthly temperature data is another piece in the broader picture of a changing climate, with month after month, and year after year, showing an increasing trend. Using NOAA's data, May was the 401st straight month to be warmer-than-average globally.

Stepping back: Per the Financial Times, U.K. officials appear to be softening plans to ban sales of fossil fuel-powered vehicles in 2040 by phrasing it as a more aspirational target.

Joining forces: Over in our Expert Voices section, Maggie Teliska of Caldwell Intellectual Property explores an initiative by GM and Honda to co-develop next-generation battery systems. 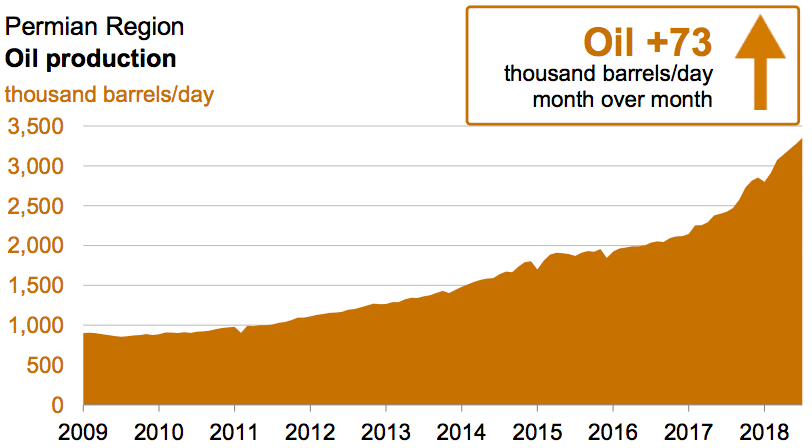 3.35 million: That's the number of barrels per day that the Energy Information Administration expects will be produced in the Permian basin region next month, according to their latest monthly estimate.

Why it matters: The 73,000 bpd rise over this month and the overall figure serve as an important barometer of the region's ongoing boom.

The big picture: The Permian is the fastest-growing shale formation but not the only one where production is rising. Overall, EIA estimates that major shale basins will be producing over 7.3 million bpd next month.

Yes, but: Here's an esoteric but relevant detail (h/t to Paul Dial). Starting with yesterday's monthly shale snapshot, EIA is putting this on the landing page for the data: "Productivity estimates may overstate actual production which could be limited by logistical constraints."

Speaking of the Permian: A note from the consultancy IHS Markit says ExxonMobil, Chevron and Shell will together need to spend almost $30 billion through 2020 to hit their production growth targets.