And at this moment in 1973, Gladys Knight and The Pips had just ended a run atop the Billboard charts with today's classic intro tune...

1 big thing: A world off track on climate change

The holidays arrived early if you're looking for something to read that's very sobering and over 800 pages long: the International Energy Agency's new World Energy Outlook 2019.

Why it matters: It finds that existing and announced policies worldwide won't come close to reining in carbon emissions, despite the strong growth of climate-friendly energy sources.

What they did: The annual report models three scenarios for the long-term future of energy demand and the fuels and technologies used to meet it. They are...

What they found: Even under nations' announced policy ambitions, energy demand is projected to rise by roughly 1% annually until 2040 (the end of the modeled period).

The big picture: Under the "announced and current policies" scenario, low-carbon sources — notably solar and wind — are surging. Renewables are the biggest electricity source by 2030.

Meanwhile, as these big reports are kind of a choose-your-own-adventure, there's also plenty to write about on its oil-and-gas market findings. 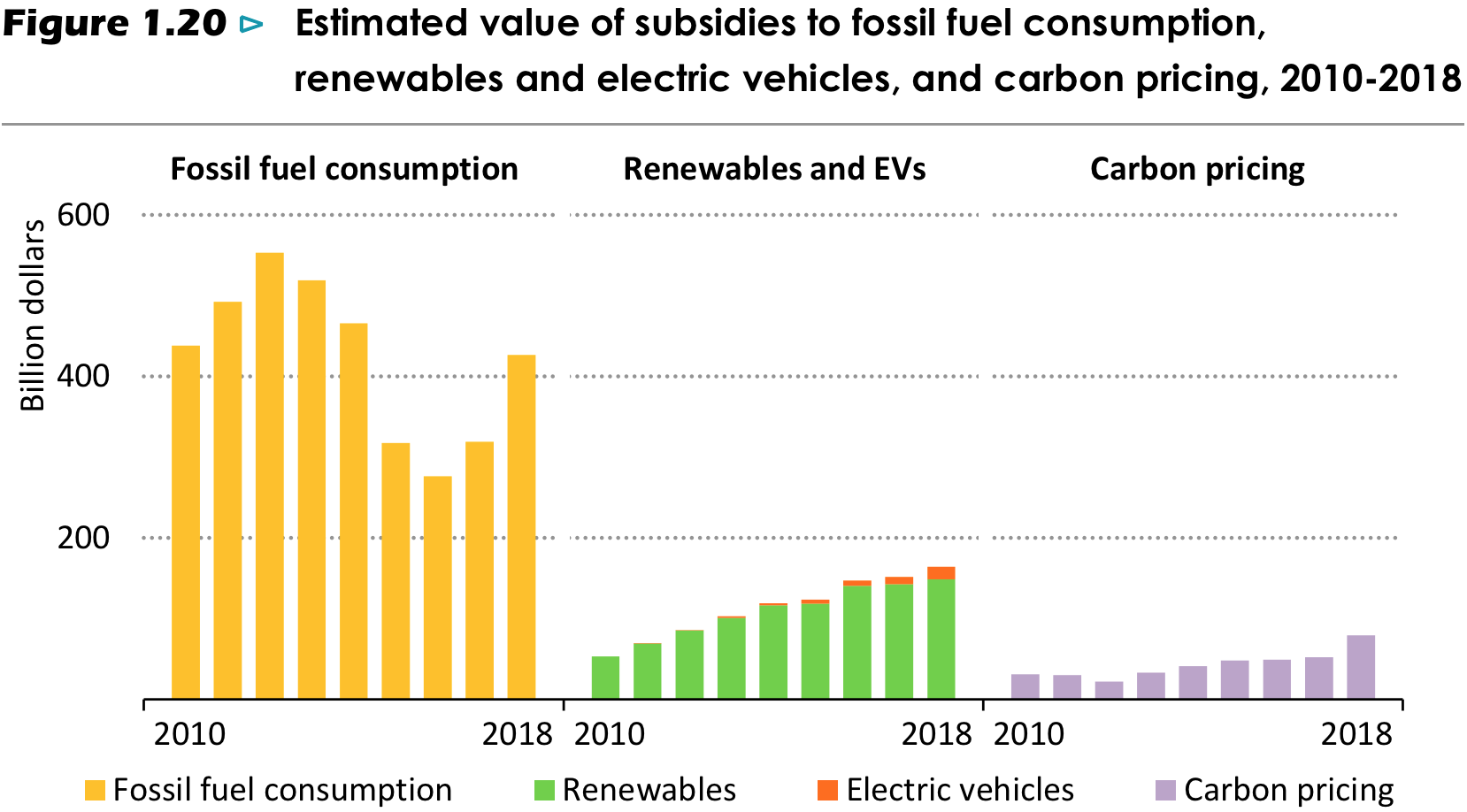 Here's another part of the IEA report that jumped out at me...

What they found: The amount paid in fossil fuel consumption subsidies worldwide is far above subsidies for renewables, and is massive compared to revenues from carbon pricing systems.

Why it matters: "This imbalance greatly complicates the task of achieving an early peak in emissions," the report states. 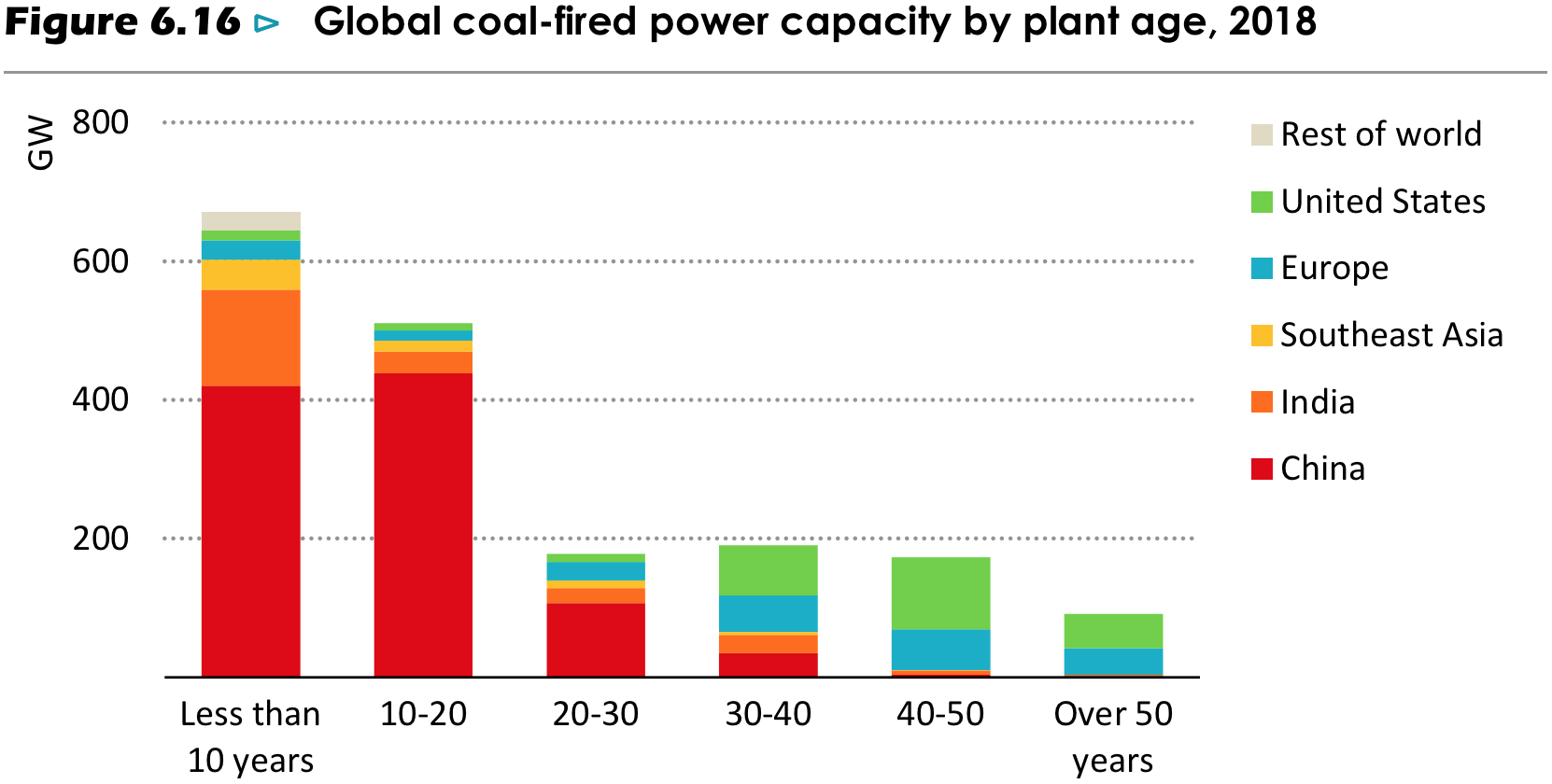 Another challenge on the climate front via IEA: Almost 60% of the world's fleet of coal-fired power plants is 20 years old or less.

Why it matters: The report notes that coal plants typically are designed to run for around 50 years, and coal is the most carbon-intensive fuel to burn.

In separate but similar efforts this week, a corporate lobbying campaign and a grassroots interest group are both calling on Washington to pass a carbon tax, Axios' Amy Harder reports.

Driving the news: Americans for Carbon Dividends, an industry-backed lobbying group, is launching a six-figure advertising campaign Wednesday promoting a carbon tax whose proceeds are returned to consumers.

Reality check: Congress is unlikely to pass such a proposal anytime soon. Nearly all Republicans, both on Capitol Hill and in the White House, are opposed to a carbon tax — at least publicly. Meanwhile, the most vocal Democrats, including those running for president, want more aggressive policies than a tax.

Where it stands: Americans for Carbon Dividends, which has funding from big corporations including ExxonMobil and ConocoPhillips, is launching the first part of what it says will be a long-running advertising campaign.

What I’m watching: Halstead expects bipartisan legislation on his group’s proposal in both chambers by sometime next year (a similar policy has already been introduced in the House). Why it matters: Tesla will "compete with some of the world’s biggest auto makers on their home turf," the WSJ notes.

What they're saying: “It’s strategic to lure German automotive talent to Tesla, and it’s a statement that Elon wants to one-up auto companies from that region," Gene Munster of the VC firm Loup Ventures tells Bloomberg.

Why it matters: Electricity giants like Duke Energy, Xcel Energy, PSEG and others have made high-profile climate pledges.

But, but, but: As the story notes, the companies don't really know how they'll get all the way there.

The big picture: "Instead, they say crossing the finish line will require significant future advances in, and a massive scaling up of, technologies such as carbon capture and sequestration, advanced nuclear reactors and battery storage — primarily with the help of the federal government — plus yet-to-be-defined emissions offsets for any remaining natural gas plants."

A few things caught my eye about the embattled, bankrupt utility at the center of California's power and wildfire crisis...

Where it stands: Via Bloomberg, PG&E is "trying to offer $13.5 billion in compensation to the victims of wildfires sparked by its power lines as part of a restructuring plan, according to people with knowledge of the situation."

The beer angle: Via San Francisco's KCBS Radio, "A Santa Rosa brewery has apologized after launching a beer with a name that used an obscenity to criticize Pacific Gas & Electric."