Extreme poverty is decreasing, while extreme inequality is on the rise — two trends with far-reaching consequences all over the globe.

The Organization for Economic Co-operation and Development (OECD) notes that “as income inequality has increased since the 1990s, social mobility has stalled, meaning that fewer people at the bottom have moved up while the richest have largely kept their fortunes.”

A recent OECD report examines how much of that wealth carries over to the next generation — it ranges from 20% in Denmark to 70% in Colombia — and calculates how long it would take someone born in the bottom 10% to reach the mean income in their country.

The bottom line: The millions of people escaping poverty may find they don't have far to rise.

In case you missed our Saturday Deep Dive on global security threats, which featured the insights of 7 former directors and deputy directors of the CIA among other top intelligence experts...

Six people have been arrested in connection with an apparent drone attack, described by the government as a failed assassination attempt, which took place Saturday night as Venezuelan President Nicolas Maduro addressed the country’s national guard.

What to watch: Trinkunas says regardless of who ordered the attack, Maduro will “try to use this to his advantage,” with further crackdowns on the opposition and purges in the military. American University's Michael McCarthy, meanwhile, writes for Axios Expert Voices that "the pressure against Maduro is coming from within his movement as much as from the opposition," and will only grow after this "embarrassment." 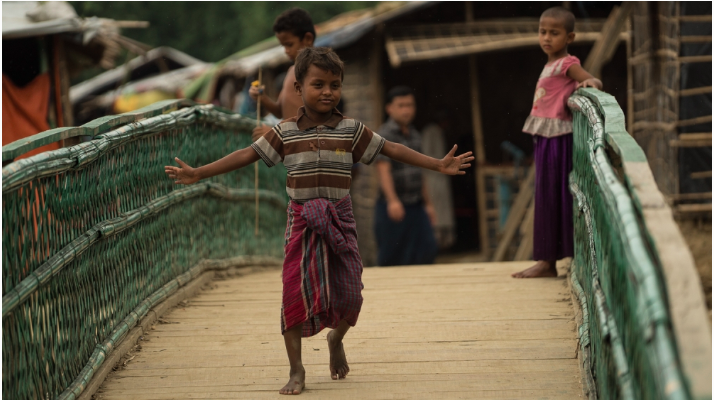 Children on the bridge separating the camp from Bangladesh. Photo: Sorin Furcoi/Al Jazeera

Of the more than 700,000 Rohingya forced from their homes in Myanmar, 4,600 are stranded in bleak conditions at a camp in no-man's land on the Myanmar-Bangladesh border, known to locals as Zero Point, Linah Alsaafin of Al Jazeera reports from the camp:

The bigger picture: Many Rohingya, a majority-Muslim ethnic group often described as "the world's most persecuted minority,” now live in limbo. Residents of Zero Point have not been given refugee status, as the area in which they have been sheltering for almost a year now is officially under Myanmar control — but a fortified border fence rigged with landmines makes a return to their villages in Rakhine state an impossible mission.

The bottom line: "When we first arrived, we thought that after a few days we would return back to our homeland," says Dil Muhammad, the Rohingya camp leader. "One year has passed, and there has been no solution. The UN has failed us."

Eritrea subjects its people to mandatory and indefinite national service, and shuts itself off to the world. But things seem to be changing in "the North Korea of Africa," the Economist reports, after an unexpected thaw with neighbor and rival Ethiopia.

Saudi Arabia has frozen all new trade and investments with Canada and is expelling its ambassador in retaliation for a tweet by the Canadian Foreign Ministry, which called for Saudi authorities to release imprisoned human rights activists, Axios' Zach Basu writes.

The big picture: Crown Prince Mohammed bin Salman has garnered praise for his efforts to modernize the Saudi kingdom, but the reforms have come amid a ruthless crackdown on dissidents like women's rights activist Samar Badawi.

The backdrop: Badawi (pictured), the recipient of the 2012 International Women of Courage award, is one of at least 15 human rights activists and government critics to be arbitrarily detained in Saudi Arabia since May 15, according to the UN High Commissioner for Human Rights.

In addition to freezing all new business and declaring the Canadian ambassador persona non grata, Saudi Arabia also plans to withdraw all 20,000 Saudi students studying in Canada, according to The Globe and Mail. They will reportedly be moved to similar programs in countries like the U.K.

Worth noting: Annual trade between the two countries is worth about $3 billion.

On Tuesday, the first tranche of U.S. sanctions against Iran lifted by the 2015 nuclear deal will snap back into place — a result of President Trump's withdrawal from the deal that comes in spite of Iran’s continued compliance, Barbara Slavin of the Atlantic Council writes for Axios Expert Voices:

The big picture: The Trump administration hopes the sanctions will curb Iran’s "malign" activities in the Middle East, but there's little likelihood of that result, especially since Assad has “won” in Syria, and Iran’s regional rival, Saudi Arabia, remains bogged down in Yemen. Although widespread protests have erupted in Iran since late last year, there are no assurances that Iranians will overthrow their government and replace it with one more attractive to Washington and its allies.

The bottom line: Iranians will suffer, but the U.S. is unlikely to benefit.

"Now, someone is going to say a grand chef who drinks Coca-Cola, that can't be. But I also use ketchup. One must be open to everything. Sometimes, you feel like eating a pizza; the next day, you may feel like couscous or paella, then, the day after, you eat some more refined cuisine. All of it is necessary."

— Joel Robuchon, the renowned French chef who has died at 73, speaking to the LA Times in 1996.

Thanks for reading — see you Thursday evening!