Friday greetings from the home office. Please remember to send me feedback, news tips and scoops via email ([email protected]) or anonymous tip (https://axios.com/tips). You can also email or Twitter DM me for Confide/Telegram/Secret details. Have a great weekend!

• All eyes on Fed Chair Jay Powell today in Jackson Hole, as he makes his first public comments after President Trump expressed displeasure with rising rates.

• Buyout bigs: Hellman & Friedman recently told investors that co-CEO Philip Hammarskjold will transition into an executive chairman role at year-end, per a public pension document. Patrick Healy, who was promoted to co-CEO this past January, will serve as sole CEO.

🚑 Rakuten Aspyrian, a San Diego-based developer of a photoimmunotherapy platform for cancer, raised $150 million in Series C funding. The round was led by existing investor Hiroshi Mikitani, the CEO of Japanese e-commerce company Rakuten, and an SEC filing suggests it could expand to $350 million. http://axios.link/0arh

• Carmera, a New York-based developer of mapping and data analytics for autonomous vehicles, raised $20 million in Series B funding led by GV. http://axios.link/SATe

• Accel-KKR has held sale talks for portfolio company Kerridge Commercial Systems, a British trading and business management software company that could be valued north of £325 million, per PE News. http://axios.link/vazd

• Platinum Equity is exploring a sale or IPO of Vertiv, a Columbus, Ohio-based provider of backup power systems for data centers that could fetch nearly $6 billion, per Reuters. http://axios.link/bKTm

⛽ ABB (SWX: ABBN) is considering the sale of its power grid business, which has an implied valuation of around $10.2 billion, per Bloomberg. http://axios.link/JFHA

• Guggenheim Partners is no longer in talks to sell a stake in its asset management unit to Munich Re, nor to “oversee about $30 billion in assets for the German insurer,” per Bloomberg. http://axios.link/N0zU

• AEA Investors is pre-marketing its seventh flagship buyout fund, which could target upwards of $5 billion, per PE Hub. http://axios.link/oI9R

• Kayne Anderson closed its third credit fund at around $3 billion in capacity (including leverage). www.kaynecapital.com

• John Rosenberg stepped down as a general partner with Technology Crossover Ventures, after an 18-year run. www.tcv.com 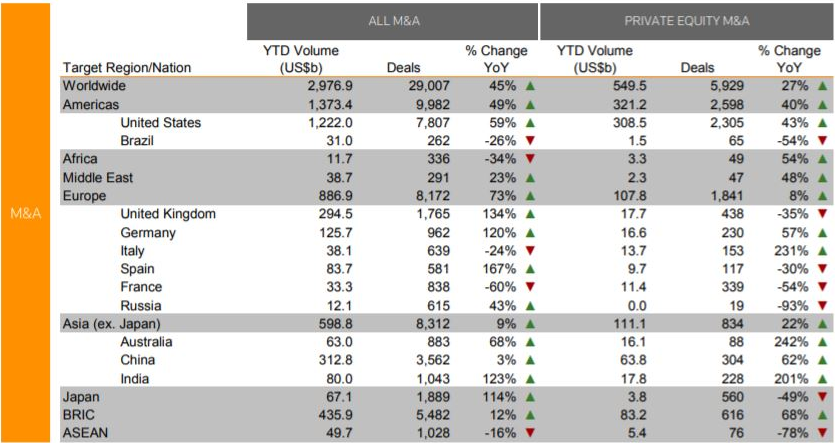 Thanks for reading. If this was forwarded to you, please subscribe at GetProRata.axios.com.