There were won't be any profiles in courage written about bank analysts covering CBS.

Yesterday's post-earnings call included not one single question about the future of CEO Les Moonves, even though he was on the call and is in the midst of being investigated for multiple allegations of workplace sexual harassment. Nor any inquiry into the boardroom battle with Shari Redstone, which could ultimately result in a merger with Viacom (or someone else).

It was as if everyone in the neighborhood gathered outside of a burning house, but only talked about the lovely weather.

🎙 Speaking of podcasts: Yesterday's regular episode was about Ivanka Trump's comments and actions in terms of the jobs skills gap (and how that intersects with tariffs). My guest was Axios' Jonathan Swan. Please subscribe via Apple or other podcast platforms.

• Crypto: Kia writes this morning that while cryptocurrencies are making inroads with mainstream investors, there are still big concerns over insider trading:

"Unlike the traditional investment markets, which are overseen by multiple government agencies, companies and funds dealing with digital tokens are largely left to self-regulate. This could leave retail investors unfairly disadvantaged without the same levels of information, and remain a hurdle to getting institutional investors comfortable with crypto-assets."

• Update: Word is that Duo Security was pretty far down the IPO path before yesterday's $2.35 billion sale agreement to Cisco, and that Cisco's initial approach was significantly lower.

• Q&A: I spoke yesterday with Sonos CEO Patrick Spence, whose smart speaker company priced its IPO low but then closed up 33%. Topics included what he felt investors didn't understand at first, if Sonos ever plans to offer its own digital services and how its mission differs from Apple's. Read it here.

Peloton, the fitness tech company known for its connected spin bikes, raised around $400 million in Series F funding at around a $4 billion valuation, plus another $150 million in secondary funding.

🚑 Karuna Pharma, a Boston-based developer of a combo therapy for therapy for schizophrenia and Alzheimer’s, raised $42 million in Series A funding (including converted debt) from ARCH Venture Partners, the Wellcome Trust and PureTech Health. http://axios.link/gZon

🐟 Legend Holdings and Pamplona Capital Management are among those considering bids for Grupo Iberconsa, a Spanish frozen seafood company owned by Portobello Capital, per Bloomberg. A deal could be worth around €600 million. http://axios.link/G0tu

• Arlo Technologies, the San Jose, Calif.-based security-camera making unit of Netgear (Nasdaq: NTGR), raised $163 million in its IPO. The company priced 10.2 million shares at $16 (below $18-$20 range) and will trade on the NYSE (ARLO). BofA Merrill Lynch was lead underwriter.

🚑 Elanco, a Greenfield, Ind.-based animal vaccines business being spun out of Eli Lilly (NYSE: LLY), filed for a $100 million IPO (that’s likely a placeholder figure). It plans to trade on the NYSE (ELAN) with Goldman Sachs as lead underwriter, and reports $78 million on $2.9 billion in revenue for 2017.

• M17 Entertainment, a Taiwan-based entertainment streaming company, withdrew registration for an $83 million IPO. This is the offering it postponed in June, at which time it blamed its underwriters, including Citi and Deutsche Bank, for an unspecified "settlement issue."

🚲 Alibaba and Didi Chuxing are considering a joint takeover offer for troubled Chinese bike-share company Ofo at a $2 billion valuation, per Reuters. It has raised over $800 million in VC funding from firms that include the two potential acquirers, plus DST Global, Coatue Management, Atomico, Matrix Partners China, Macrolink and CITIC.

• Cerberus Capital Management completed its sale of Reydel, a maker of interior components to auto OEMs, to a subsidiary of India’s Motherson Sumi Systems.

🍺 Heineken is paying $3.1 billion for a 40% stake in the parent of listed Chinese brewer China Resources Beer. http://axios.link/mLUW

• August Capital is raising up to $250 million for its eighth VC fund, per an SEC filing. Two general partners listed on Fund VII — Howard Hartenbaum and Vivek Mehra — are not listed this time around. www.augustcap.com

• Fearless Ventures, a Redwood City, Calif.-based firm formed by and Seth Miller (ex-DBL Investors) and Dave Kashen (ex-CEO of Worklife), is raising $50 million for its debut fund, per an SEC filing. www.fearless.vc

• John Studzinski is leaving The Blackstone Group, where he once led advisory (later spun off into PJT Partners) and now runs the International Family Capital practice for its private wealth group. He has been with the firm for a dozen years. http://axios.link/lq16 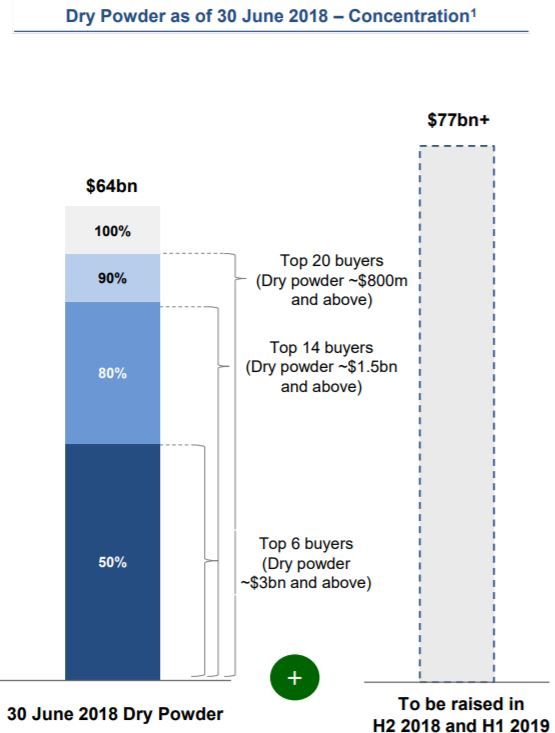 "The level of available dry powder in the hands of secondary buyers has decreased significantly since 2017 year-end from $77bn to $64bn as many buyers were able to finish investing their funds in the context of record deal flow This drop in dry powder looks set to be short-lived as buyers plan to raise a massive $77bn of capital in the course of H2 2018 and 2019, with many large buyers coming to the market with flagship funds."