While U.S. trade negotiators continue to push for a trade deal with China that includes "significant structural changes" to its economic model, investors are putting the trade war behind them, pushing forward into Chinese assets and being rewarded handsomely.

Why it matters: A growing chorus of investors don't see this as a short-term theme, but the beginning of a new cycle where the growth dynamics in countries like China, India and others in Asia, Africa and Latin America drive not just the lion's share of the world's gross domestic product but also its market performance.

China, specifically, is making major strides in refining its economy, but not because of the trade war.

Go deeper: Exports as a percentage of Chinese GDP have already shrunk from 36% in 2008 to just 18% today, says Henry McVey, head of global macro and asset allocation at investment firm KKR. And the Chinese economy is still growing at a 6% clip, turning to services and other domestic industries.

And that's just the tip of the iceberg, say global strategists at Wells Fargo Investment Institute (WFII). They expect to see Chinese urbanization rise towards 80%, moving some 400 million people from rural to urban areas, and buffeting an already growing middle class.

Further, they say, 9 of 11 economic sectors in China should generate faster corporate earnings growth than their counterparts in the U.S. over the next 3 to 5 years. The two that aren't — energy and oil production and technology. (As we wrote yesterday, China is far outpacing the U.S. in renewable energy investment.)

After the worst performance in a decade in 2018, China's stock market has been one of the best performers in the world in 2019.

Driving the news: Today, index maker MSCI will announce its decision on increasing the number of onshore Chinese companies in its indexes. So far, just 5% of the so-called A shares are included, but investors expect to see that rise to around 15%.

Details: A shares would be added to the MSCI World and China indexes as well as the Emerging Markets index, which tracks $1.9 trillion of securities.

The bottom line: Raising the level of A shares would underscore China's progress in opening up its markets despite tensions with Washington, less than a year after MSCI admitted Chinese A shares to its index for the first time — after 3 rejections.

2. The real consequences of the trade war

Businesses are not abandoning China in droves as a result of President Trump's trade war. But business leaders are annoyed and making changes.

In a recent survey of more than 200 senior executives at U.S. multinational companies with operations in China, 60% of respondents said they expect their business to face cost headwinds due to the U.S. tariffs on Chinese goods.

The big picture: The survey conducted by Bain & Co. and shared with Axios finds that while the executives largely support tariffs on China (60%), few of them think China's retaliatory tariffs are "fair" and most don't like the tariffs' results.

In the next 12 months, more than 40% of the executives said their companies planned to take actions like finding new sourcing partners and new regions to source raw materials.

After gaining 7.8% in January, the S&P 500 has added another 3.3% so far in February for a year-to-date return of 11.4%. Barring a more than 3% drop today, the S&P will finish the month higher again. That's a strong historical indicator that the market will end higher for the year.

What they're saying: "Since 1938, there's been 30 years where both January and February have been positive. And 29 of those years out of 30 have ended up positive, and big, on average over 20 percent," Jodie Gunzberg, head of U.S. equities at S&P Dow Jones Indices, said on CNBC last week.

On the other hand: This is the best first 2 months of the year since 1987. But 1987 turned out to be a rough year for the stock market.

4. What moves the market 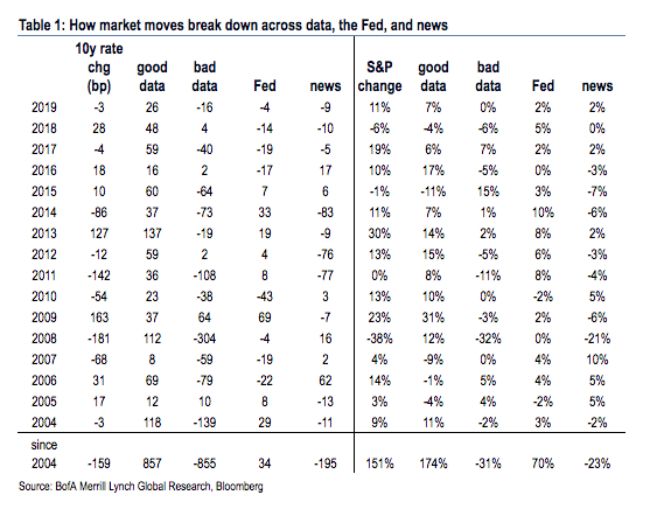 A Bank of America Merrill Lynch chart showing how news, the Federal Reserve and economic data influence the stock and bond markets. (Note that percentage must be compounded rather than added to calculate changes on the S&P.)

Bank of America Merrill Lynch strategists looked at just how much of an effect news, economic data releases and the Fed have had on the S&P 500 and the U.S. 10-year Treasury note since 2004.

What stands out most is just how much more reaction comes from good news than bad news, and what a corpulent role the Fed plays in the stock market's gains, Ralph Axel, director of U.S. interest rate strategy at Bank of America Merrill Lynch tells Axios.

"The main takeaway is that there is an asymmetry in how markets are responding to good and bad data – in both rates and stocks."

"Another takeaway is that the Fed is always propping up stocks, and from our data, the Fed appears responsible for a large amount of stock performance.

"Because of the dovish shift they've taken recently, and the dovish tilt to the year-long review now underway, this makes it more likely we can get to our S&P target [of 2,900]."

(BAML designated each day as a good data day, a bad data day, a Fed day or a news day. News days are days without data and without Fed, and can include data releases in countries outside of the US, elections, etc.)

They took us up on only two of the suggestions, Axios' Courtenay Brown notes.

The first: What role did the U.S. stock market play in the Fed's decision [to lower expected rate hikes for 2019]?

The second: Your predecessor, Janet Yellen, said recently that she does not believe President Trump understands economic policy or what the Fed does. Do you agree?

The big picture: We still don't know what U.S. data was bad enough to spark Powell's transition from very hawkish to very dovish — besides the volatile stock market.

Powell did mention "crosscurrents" a few times, i.e. global risks to the economy like Brexit and trade tensions. However, those aren't new factors on the horizon and were just as much a risk back in December when the Fed raised rates.

The cannabis industry has quietly been having a very strong 2019, and could push even higher.

The big picture: The nascent industry has drawn an outsized share of short sellers who are betting the stocks will fall in value. Short sellers, by and large, say they are not bearish on the business, but believe the companies' valuations are wildly high, making them good short bets.

Details: Shorts had been up $21 million in mark-to-market profits, but headlines Tuesday of new breakthroughs poised to boost the industry pummeled them with $213 million of mark-to-market losses. They are now down $192 million for the month and $1.78 billion for the year, according to S3 Partners managing director of Predictive Analytics Ihor Dusaniwsky.

"If losses for cannabis short sellers continue to mount we should see continued short covering and added upward price pressure boosting the profits of a growing community of long shareholders," said Dusaniwsky.

The bottom line: Short sellers borrow stock with the intention of buying it later at a lower price and pocketing the difference. But with an average stock borrowing fee of 15% and mounting gains in the cannabis sector, it's getting very expensive to hold onto short positions.

History: Hannibal Barca was an African general and statesman who is widely considered one of the greatest military commanders and strategists in history.

Hannibal took command of the armies of Carthage at the age of 26 and triggered the outbreak of the Second Punic War. He then marched a massive army of thousands of men and a fleet of African elephants across the Pyrenees and Alps mountain ranges into central Italy in what historians call one of the most famous campaigns in history.

He distinguished himself for his ability to determine his and his opponent's respective strengths and weaknesses, and to plan battles accordingly. Hannibal's well-planned strategies allowed him to conquer several Italian cities allied with Rome, and he occupied most of southern Italy for 15 years.

Hannibal's legend as a strategist puts him in the company of Alexander the Great, Julius Caesar and Scipio Africanus.