We received a lot of positive feedback on the "What we're using" feature in yesterday's Login, but also some good questions. To be clear, any such products highlighted are purely our editorial choice and there is no affiliate revenue or other money changing hands.

Lots of money is made in enterprise software, but it's hard to make it interesting, even for the folks investing in those companies. One investment firm, Wing.vc, has come up with a new twist: Rank the private companies in the space the way that a coaches' poll ranks college sports teams.

Why it matters: Though not always scintillating, enterprise technology, which serves large companies, organizations and institutions, brings in billions of dollars and accounts for some of the most successful IPOs.

Yes, but: As with sports, not all players are equal. Some of the firms in the rankings are new startups while others are large companies on the verge of going public. So Wing divided them into early-, middle- and late-stage companies and listed the top 10 in each.

This graphic shows the full top 10 in each category: 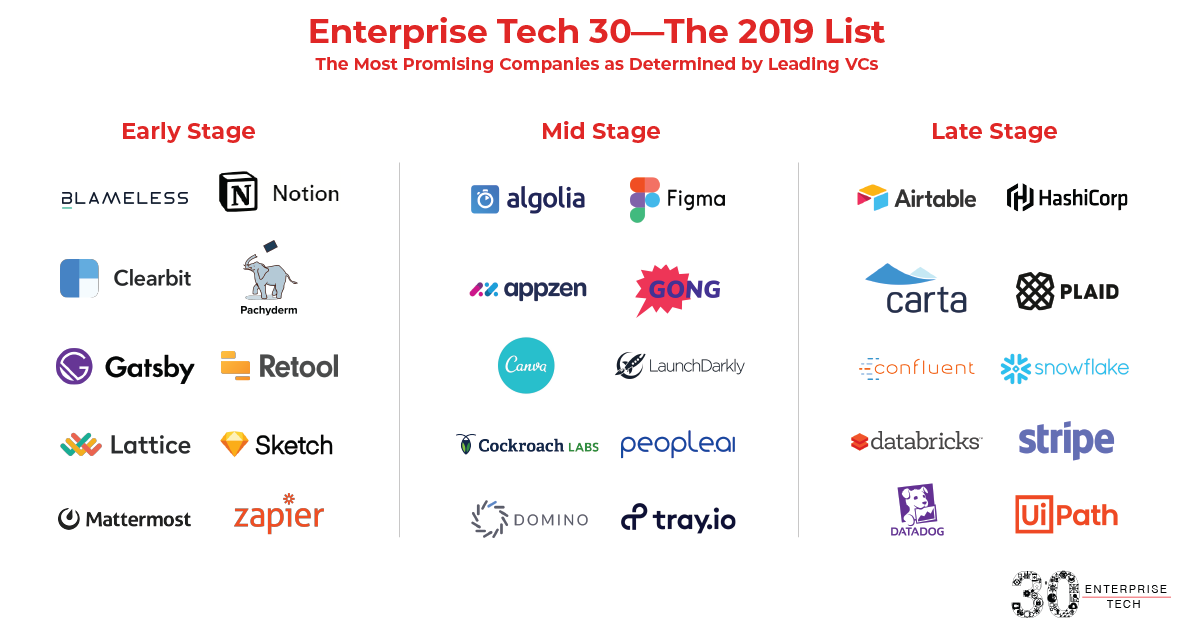 The bottom line: Getting onto this list won't magically make any of these companies more interesting. But any project that helps put more of them on our radar — before they file to go public or get acquired — is doing some good.

Four years ago, Amazon held its first Prime Day — offering steep discounts and deals on its site. Since then, not only has Prime Day ballooned to a two-day affair, it has also gotten much bigger than Amazon, as Axios' Erica Pandey reports.

The big picture: The halo effect of Prime Day highlights Amazon's influence on the entire retail market. What started as an Amazon invention has become a Black Friday for July, with Walmart and Target adding their own summer deal days.

Worth noting: The buying sprees that occur during these big sales are accompanied by a subsequent binge of returns, Adobe notes. Last year, Prime Day purchases saw 30% higher rates of return than goods bought on other days.

Apple confirmed to TechCrunch that the update was performed automatically and required no action on the user's part.

Zoom, which said it worked with Apple on the move, also issued its own app update Tuesday removing the Web server and giving users the ability to uninstall Zoom if they wish.

The bottom line: The moves undo the damage, but as we reported yesterday, the bigger question is, When will tech companies stop prioritizing features over privacy in the first place?

Meanwhile, Apple has temporarily disabled the "walkie-talkie" feature on Apple Watch due to a vulnerability that could allow eavesdropping of a nearby iPhone.

The Trump administration said on Wednesday it will investigate a French plan to impose a 3% tax on U.S. tech companies including Amazon, Apple, Facebook and Google, Axios' Orion Rummler notes.

Why it matters: This move escalates the administration's global trade fight, "stok[ing] tensions with the European Union," per the New York Times. It is "a step that could lead Washington to impose trade penalties," the Washington Post adds.

The big picture: If the administration pursues this probe into France — a U.S. ally — it will use the same legal mechanism that President Trump used to strike China with trade war tariffs last year.

What they're saying: Tech trade groups praised the move, including the Computer & Communications Industry Association and ITI.

Our thought bubble: How you see France's tax depends largely on where you sit. In France and other places, it looks like a way to derive tax revenue from companies that are earning lots of profit from people in their country. For the tech companies, it looks like an added and unique tax aimed at punishing U.S.-based companies.

Want to watch people in T-Rex costumes run against each other on a racetrack? Of course you do, and you are in luck.