Welcome, welcome, welcome (and apologies to John Oliver and any readers that somehow thought this newsletter was an episode of "Last Week Tonight").

At dueling conferences this week, Microsoft and Google will vie for developers' attention, with Microsoft emphasizing new offerings for its growing Azure cloud and Google pressing forward with new features for Android and its voice-based Assistant.

Driving the news: The spring developer conference season kicked off with Facebook's F8 last week and will continue through Apple's Worldwide Developer Conference in the first week of June.

What to expect: Microsoft's Build, which starts today in Seattle, is likely to focus as much on the Azure cloud as it does on desktop Windows, given that's where Microsoft's growth has been coming from and where it faces the steepest competition from Amazon's AWS and Google Cloud.

CEO Satya Nadella gives the opening keynote and is expected to focus on four areas.

Meanwhile, Google I/O starts a day later in Mountain View, California, and will cover a lot of ground, though Android and Google Assistant are likely to be big areas of focus.

What's different: Up until the last couple of years, the focus was largely on introducing new features and making developer's lives easier. Those are still big themes, but so are respecting user privacy, minimizing social harm and monitoring screen time.

What's the same: The focus of the events remains on developers. At these conferences, they get previews of tech that often doesn't show up on consumer's devices until later in the year.

2. Our guide to a Facebook-FTC settlement

Reports suggest the Federal Trade Commission is close to a settlement over Facebook's privacy failures, with a vote potentially coming as soon as this week, Axios' David McCabe reports.

Here's our guide for cutting through the spin to understand what it actually means for Mark Zuckerberg's behemoth.

Key questions to keep in mind:

Yes, but: The amount the FTC can seek in a court case against a company is limited by law.

Be smart: Both the FTC’s Republican chairman Joe Simons and the tech industry will have an incentive to paint any settlement as strong. Facebook's critics and consumer groups will likely complain that the settlement doesn't go far enough.

What's next: The settlement would be a major development in the ongoing national debate over online consumer privacy — but nowhere near the end of it. Lawmakers on Capitol Hill are currently trying to hammer out legislation that would put Facebook and other tech giants under new privacy rules, but progress has been slow. 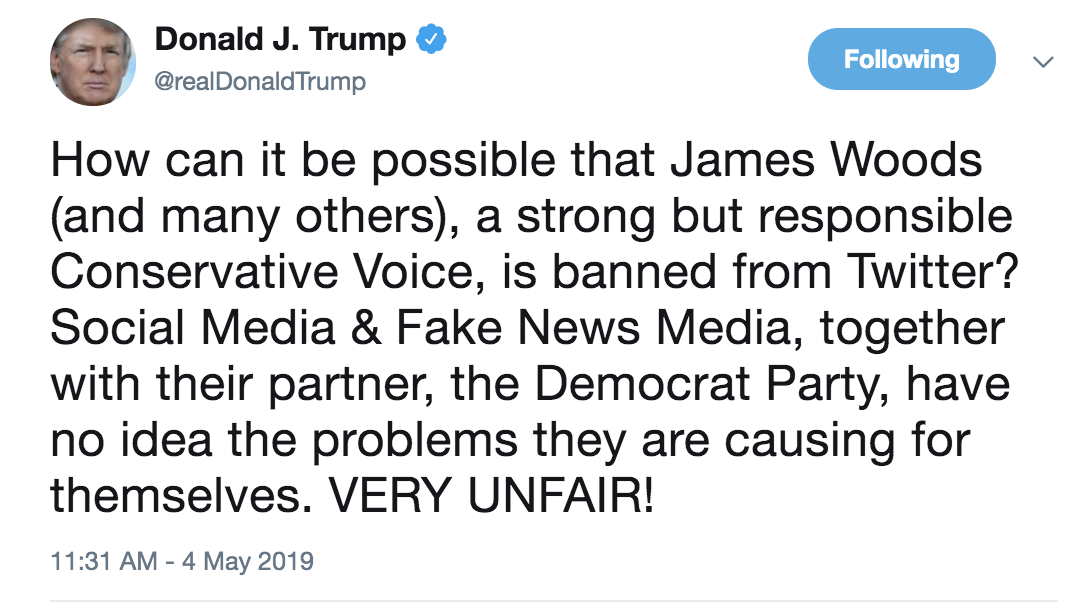 Once again, President Trump's tweets are causing headaches for the tech industry.

What's happening: The tweeter-in-chief has been on his latest tear since Facebook banned several extremists on Thursday, mostly from the far right.

Why it matters: The tech industry has a number of concerns. First, the industry has always sought to be perceived as politically neutral. Second, companies worry what Trump or his agencies might do on the regulatory front, given the drumbeat of vague presidential threats.

Our thought bubble: Staying politically neutral is tough enough, but being seen as neutral might be an impossible task in this era. A better approach — though no less challenging — is to enforce consistent rules for all.

Meanwhile, there are questions for the media on how to report on Trump's tweets without simply amplifying his voice. A study from Media Matters For America found that the mainstream media often repeats misinformation without added context, serving simply to broaden the reach of (and lend credibility to) false information.

At the meeting: The annual video featured a parody of Buffett and Apple CEO Tim Cook hatching a plan for the game. An advertisement for the game touts: "It's your one chance to be better than Warren Buffett at something," according to the Wall Street Journal.