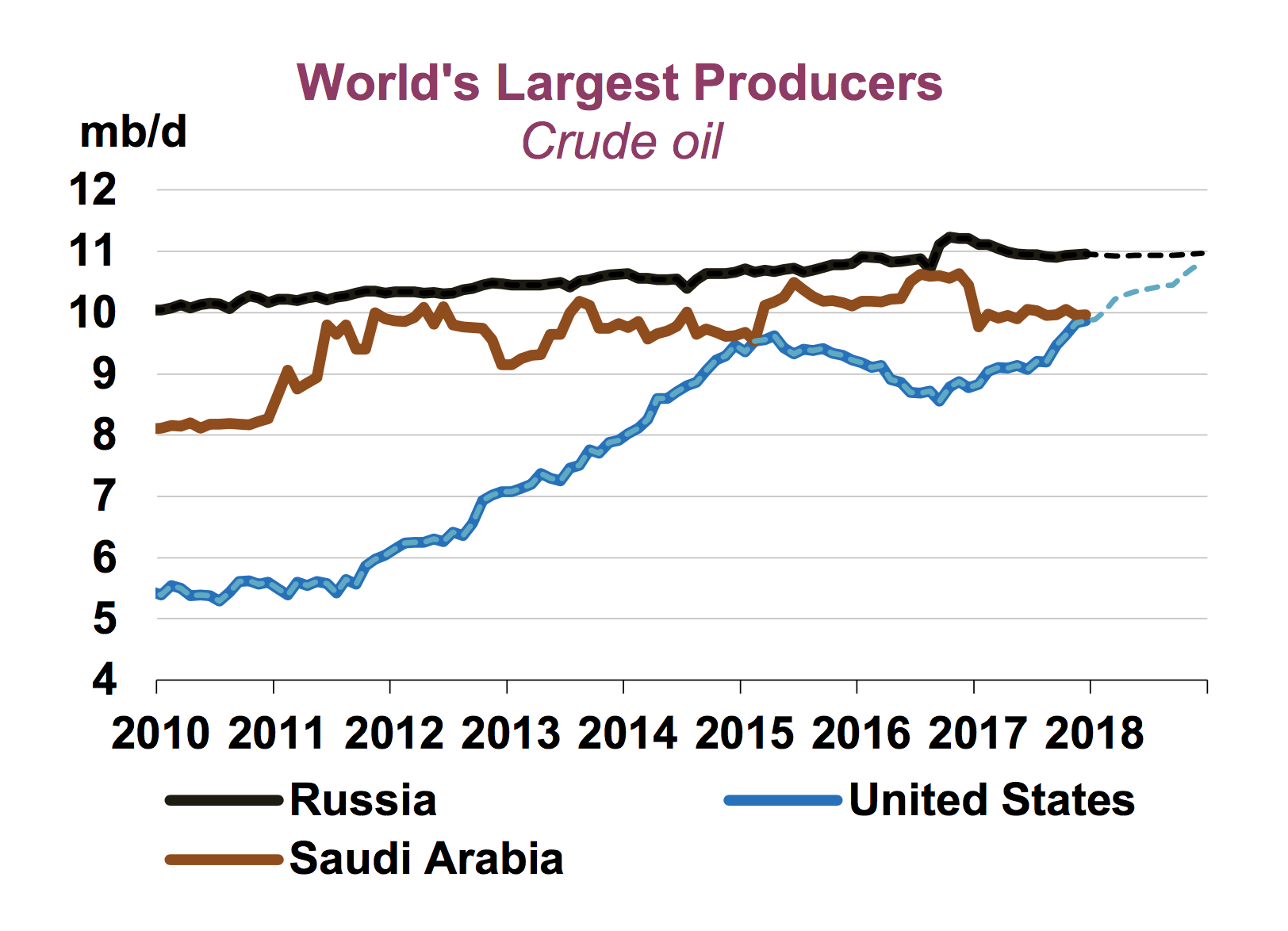 The International Energy Agency predicted Friday that the U.S. will surpass Saudi Arabia in crude output this year and challenge Russia as the world's top producer on the back of "explosive" growth in shale production.

Why it matters: While the report is consistent with existing production forecasts, it nonetheless starkly underscores how the U.S. has upended global markets in recent years.

"Expect a volatile year": The IEA report predicts that 2018 could be a turbulent year in oil markets, thanks to geopolitical risks and questions about continued compliance with the OPEC agreement.

By the numbers: Brent crude oil recently hit 3-year highs of around $70-per-barrel and IEA notes that "the market is clearly tightening" as crude stockpiles have fallen. But IEA says the prospects for higher prices are cloudy.

Go deeper: Read the full story here. The WSJ also has a close look at the new IEA supply and demand data here. And IEA's summary of the monthly report is here.

A couple of notes from Capitol Hill...

On the record, part 1: Yale Environment 360 has a lengthy interview with GOP Rep. Carlos Curbelo, the co-chair of the bipartisan Climate Solutions Caucus, that now boasts over 60 members, evenly divided between the parties. A couple of takeaways...

Caveat: As a reminder from your Generate host, this group is somewhat controversial because some critics see it as a paper tiger, noting for instance that it includes one member who introduced a bill to literally abolish the EPA, and more recently most of its GOP members backed the tax bill that opened ANWR to oil drilling.

On the record, part 2: Via the Associated Press: "A top manager who supervises the Environmental Protection Agency program responsible for cleaning up the nation's most contaminated properties and waterways told Congress on Thursday that the government needs to plan for the ongoing threat posed to Superfund sites from climate change."

Place or show: Year-end data from NASA and the National Oceanic and Atmospheric Administration released yesterday shows that 2017 was among the hottest years in the modern temperature record that dates back to the late 1800s.

Why it matters: The latest evidence of the ongoing warming trend will provide fresh data points for advocates of tougher emissions curbs worldwide and critics of White House efforts to abandon Obama-era climate initiatives.

The big picture: Mashable’s Andrew Freedman culled some more important details from the NOAA data, including...

This is useful: The Dallas Fed is out with the latest edition of its slideshow that's full of charts about oil and gas prices, U.S. and global production and inventories, employment and more.

Small bounce: A short report from IHS Markit summarizes their analyses of how much oil companies will spend on new exploration worldwide in coming years.

Nearby action: Via Reuters, "An auction of deepwater oil and gas fields in Mexico this month may prove the last major opportunity for President Enrique Pena Nieto’s government to capitalize on its opening of the energy sector, the central plank of its economic agenda."

Iraq: Bloomberg reports that BP has agreed to help Iraq's government bolster oil production from the big Kirkuk oilfield in the Kurdish region.

Every picture tells a story: The chart above, adapted from a brief new Energy Information Administration report, shows that the federal agency projects total U.S. fossil fuel production in to set new records this year and in 2019.

Why it matters: It also tells the story of major changes in the overall U.S. energy picture — note the widening bands for crude oil and natural gas, which stems from the shale boom. The narrowing coal share is the result of losing lots of market share to gas (and renewables) in power markets.