Good morning! Was this email forwarded to you? Sign up here

Today marks the 1972 release date of Paul Simon's self-titled album, and he would not give us false hope...

Oil prices are basically flat Thursday after falling yesterday despite uncertainty in Venezuela and the White House endorsement of regime change vs. Nicolás Maduro. But, that could change if new U.S. oil sanctions arrive soon.

Why it matters: For now, the limited market response to Venezuela shows how concerns about a weakening global economy are keeping upward price pressures from the geopolitical turmoil in check.

What they're saying: “Right now, the market is kind of keyed in to growth risks stemming from U.S.-China trade talks, and a slow start out of the gate for the U.S., given the government shutdown,” Macro Risk Advisors' Chris Kettenmann told the Wall Street Journal yesterday.

But, but, but: Prices inched up earlier this morning, and one analyst tells Reuters that the prospect of U.S sanctions against Venezuelan crude exports could jolt the markets soon.

The intrigue: Venezuela's collapsing production in recent years has already lessened its prominence in global markets.

The storylines dominating climate change news are usually doom and gloom, but corporate America sees some new ways to integrate a warmer world into its business models, according to an item in this morning's Axios AM.

Driving the news: That conclusion was gleaned from disclosures from more than 7,000 companies worldwide (1,800 in the U.S.) that were collected by CDP, a London-based nonprofit that asks companies to report their environmental impact. Many report expected increases in product demand.

My thought bubble: For the most part, these financial benefits are anomalies. Most impacts will be dire and companies like Coca-Cola, which worries about water shortages, have long realized the risks to their operations.

Go deeper: Read the full story and sign up for Mike Allen's AM newsletter here.

Why it matters: The funding amount in the Series A round was not disclosed, but it signals the interest in getting a stake in the world's largest market for EVs and its infrastructure.

Details: BP's announcement says PowerShare's tech is a way to help manage the growing role of EV's in electricity infrastructure.

The big picture: The investment is the latest sign of European-based multinational oil-and-gas giants getting increasingly involved in the EV charging space. Some other examples are...

But, but, but: Investments in low-carbon and emerging energy tech and companies — including renewables and EV infrastructure — remains a very small part of oil majors' portfolios.

Why it matters: While it’s very unlikely to become law in at least the next few years, it’s nonetheless a marker for efforts to move national carbon pricing beyond the think tank and advocacy world and back into Congress.

What's new: Florida Democrat Ted Deutch unveiled the bill with a few other Democrats and one Republican. The bill would impose an initial $15-per-ton carbon "fee" on fossil fuel producers, processors and importers that rises $10 annually.

The big picture: After a near decade’s absence in Washington, debate over big climate and energy policies are emerging in Washington as Democrats take control of the House and the 2020 presidential campaign heats up.

5. About that 12-year deadline to curb warming

Prominent climate scientists are pushing back against the view, promoted by media coverage of recent science reports as well as climate advocates, that we have only 12 years to act on global warming or face an existential threat to humanity, Axios' Andrew Freedman reports.

Why it matters: This do-or-die framing has found a powerful advocate in Democratic freshman Rep. Alexandria Ocasio-Cortez, who said on Monday that millennials understand that we only have 12 years or "the world is going to end."

The big picture: During the past year, several scientific reports have been released that underscore the urgency of slashing emissions of greenhouse gases to avoid facing severe consequences from global warming.

A particularly influential report was published by the UN Intergovernmental Panel on Climate Change (IPCC) in October 2018.

The catch: While there were only 12 years left till 2030 when the IPCC report came out, the reality is that we have a diverse array of choices before us in terms of how soon to make emissions cuts and how significant and costly they are, top climate scientists told Axios.

What we're hearing: "12 years isn't a deadline, and climate change isn't a cliff we fall off — it's a slope we slide down," said Kate Marvel, a climate scientist at NASA. "We don't have 12 years to prevent climate change — we have no time.  It's already here. And even under a business-as-usual scenario, the world isn't going to end in exactly twelve years." 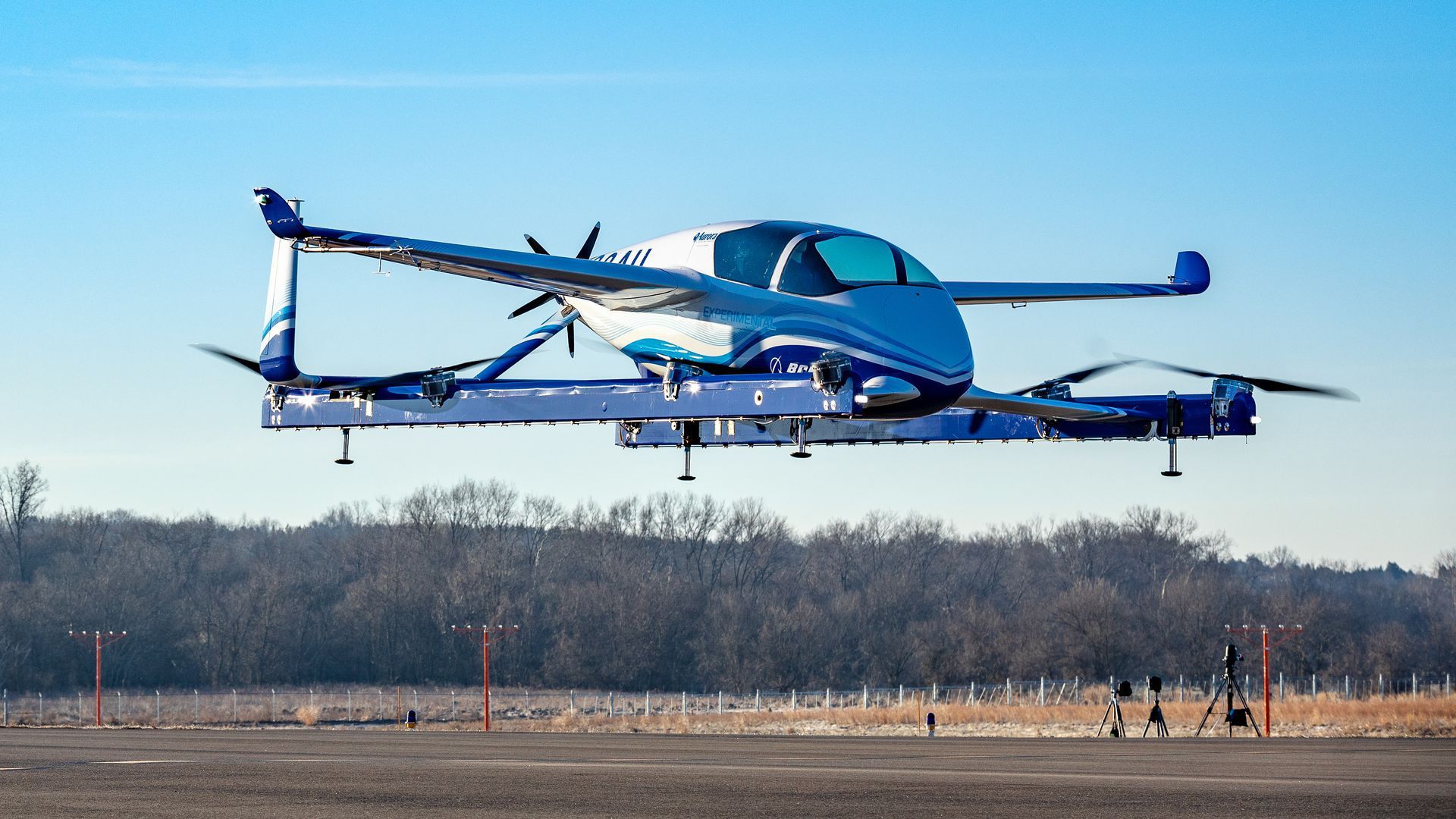 Axios' Kaveh Waddell writes ... Imagine a helicopter and a small propeller plane had a baby: That's what Boeing's new autonomous "passenger air vehicle" looks like. (Apparently they can't settle on a name either.)

Details: The plane-copter-thing is electric and can fly on its own for 50 miles — including vertical takeoff and landing, Boeing says. It flew for the first time this week.

What's next: Boeing's urban mobility division is also working on a version to carry 500 pounds of cargo, which it says it will test outdoors this year.

Who said it: Democratic Sen. Kirsten Gillibrand, who recently joined the field of 2020 White House hopefuls, talking about climate change on the "Pod Save America" podcast.

Why it matters: The remark was part of a much longer chat that showed how one of the major contenders will frame the topic. They're Gillibrand's most extended remarks on climate I've seen since she jumped into the race.

What we're hearing: Gillibrand followed the "life or death threat" by noting the toll of 2012's Superstorm Sandy and other powerful storms.