D.C. readers: You're invited! Join Axios' Mike Allen tomorrow morning for a look into what 2019 holds for health care policy as a new split-Congress takes the hill. RSVP here.

And happy birthday to Joan Armatrading (it was Sunday). She's got today's beautiful intro tune...

Axios' Amy Harder reports from Poland on the U.S. position at UN climate talks, where a senior Trump official said the White House posture is gaining support from other countries.

“There was a lot of interest [in the event]. We had a lot of people [from other countries] reach out, some gauging interest, asking about what it was, looking to participate. We’re happy to engage in these realistic conversations about global energy systems.”

Why it matters: The U.S. stance is much friendlier to coal and oil than nations calling for very steep emissions cuts to stave off high levels of warming.

The big picture: Griffith wouldn’t name countries expressing interest in the U.S. position. But a few data points suggest more support for this perspective compared to last year, when the administration held a near identical event.

What they're saying: The New York Times reports that the U.S. alignment with those nations "injected a new dynamic that several diplomats said they found worrisome."

“The U.S. along with Saudi Arabia are playing a clear and calculated spoiling role in the climate change negotiations,” Ian Fry, a top diplomat for the island nation Tuvalu, tells NYT.

Threat level: The ambition around the world for the 2015 Paris Climate Agreement is lessening, fueled by nationalistic leaders like President Trump and Brazil’s President-elect Jair Bolsonaro, who has criticized the deal and withdrew from hosting this same conference next year.

What's next: "National leaders and ministers are preparing for the final stretch of U.N. climate talks, with just days left to break through thorny issues that diplomats have struggled to resolve," AP reports.

If the new OPEC+ deal to cut production is going to send prices sharply upward, it's stumbling out of the gate. But the race just started.

Where it stands: "Oil edged higher on Tuesday, clawing back some of the previous day’s hefty losses as a modest show of strength in global stocks, a slightly weaker dollar and an unplanned supply outage in OPEC member Libya lent support," Reuters reports.

The big picture: Oil prices had slipped on Monday, basically wiping out the gains made on Friday after there was an agreement between OPEC and Russia to curb output by 1.2 million barrels per day starting next year.

Analysts I spoke with caution that the stagnant prices are rooted in several factors like trade squabbles, Brexit, wider market woes, and concerns about soft demand growth.

What they're saying, part 1: Roger Diwan of IHS Markit says it's "way too early" to render a verdict on the efficacy of the OPEC+ decision based on yesterday's oil trading.

“These daily moves are very much linked to what’s happening more broadly in the market.”

What they're saying, part 2: Remember when I mentioned in yesterday's Generate that several commodities analysts see Brent eventually moving back into the $70 range on the strength of OPEC's move?

— Ed Morse in a note, per CNBC 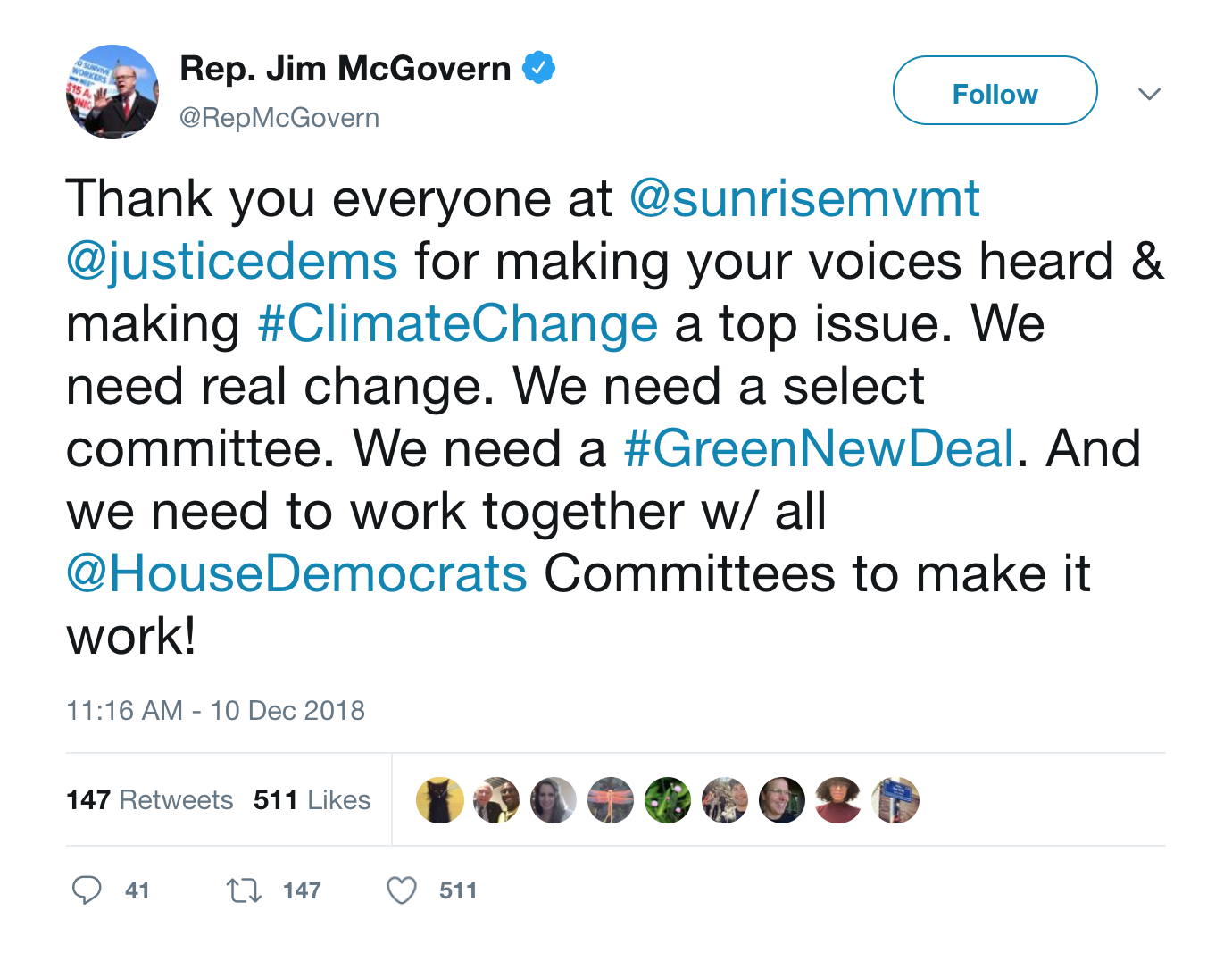 Rep. Jim McGovern, a senior Democrat, has thrown his support behind the "Green New Deal" committee proposed by Rep.-elect Alexandria Ocasio-Cortez and backed by a movement of young activists.

Between the lines: Vigorous outside pressure can affect inside baseball in Congress.

Why it matters: The Rules Committee will play an important nuts and bolts role in shaping the select committee on the topic.

But, but, but: It's unclear exactly how the proposed Select Committee for a Green New Deal would function. Some veteran Democrats — notably incoming Energy and Commerce Chairman Frank Pallone — criticize calls for a new committee. McGovern says he wants to balance the new panel with existing committees' turf.

The intrigue: Ocasio-Cortez's proposal has changed slightly in a way that could help to ease territorial tensions.

But the true level of support won't become fully known for quite some time, because the "Green New Deal" is really at least 3 things right now:

Axios' Neal Rothschild writes ... Republican lawmakers in the Trump era are talking about climate change far less than they used to, while Democratic mentions have spiked to new highs, according to a study by the public affairs software company Quorum.

Why it matters: There's always been a divide between Republicans and Democrats on the issue, but this data — measured by the number of floor statements, press releases and social media posts that mentioned climate change — shows that the chasm is growing. 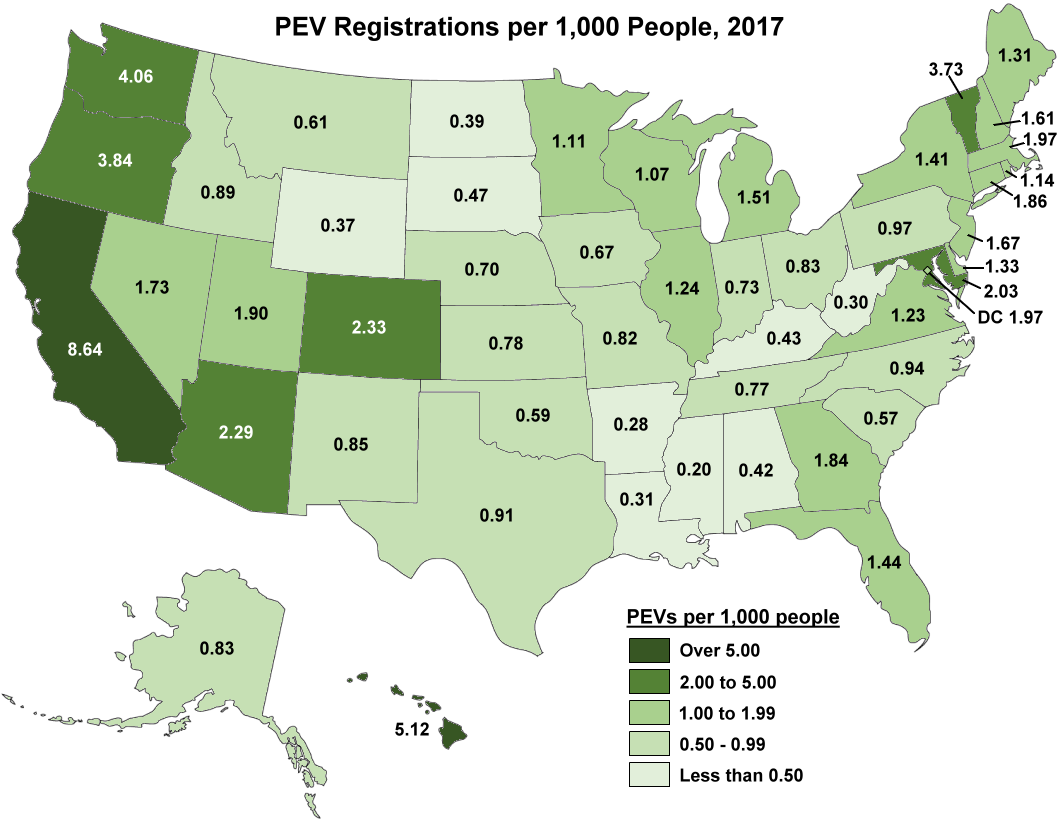 This new Energy Department chart provides a helpful way of seeing how electric vehicle adoption in California is far ahead of other states.

By the numbers: Per DOE's Vehicle Technologies Office...

The big picture: Cumulative electric vehicle sales in the U.S. recently topped 1 million. According to the pro-EV coalition Veloz, over 500,000 of them were in California, which is by far the nation's largest auto market.

6. On my screen: Russia, Tesla, wetlands

Climate policy: The head of the Climate Leadership Council, a group pushing for a revenue-neutral carbon tax, penned an op-ed in the Washington Post to push back against the idea that events in France and Washington State are nails in the coffin.

"As long as the public perceives a carbon tax as an increase in its energy costs and, therefore, a reduction in its living standards, chances of success are low."

"By contrast, a winning carbon tax strategy would return all the money raised directly to citizens, making the majority of families better off."

Tesla: Business Insider reports that "Even as Tesla remains the most shorted US-listed stock, it's beating the broader market by a mile."

Regulations: Via the New York Times, "The Trump administration is expected on Tuesday to unveil a plan that would weaken federal clean water rules designed to protect millions of acres of wetlands and thousands of miles of streams nationwide from pesticide runoff and other pollutants."