Happy Tuesday! Did you take a road trip this weekend? Did you notice any pain at the pump? Let me know at [email protected].

My latest Harder Line column cuts through the noise to tell you what's driving gasoline prices up — and what could lower them in the near future too.

I'll share that, and then Ben will take back newsletter control for the rest.

1 big thing: who is to blame for higher gas prices 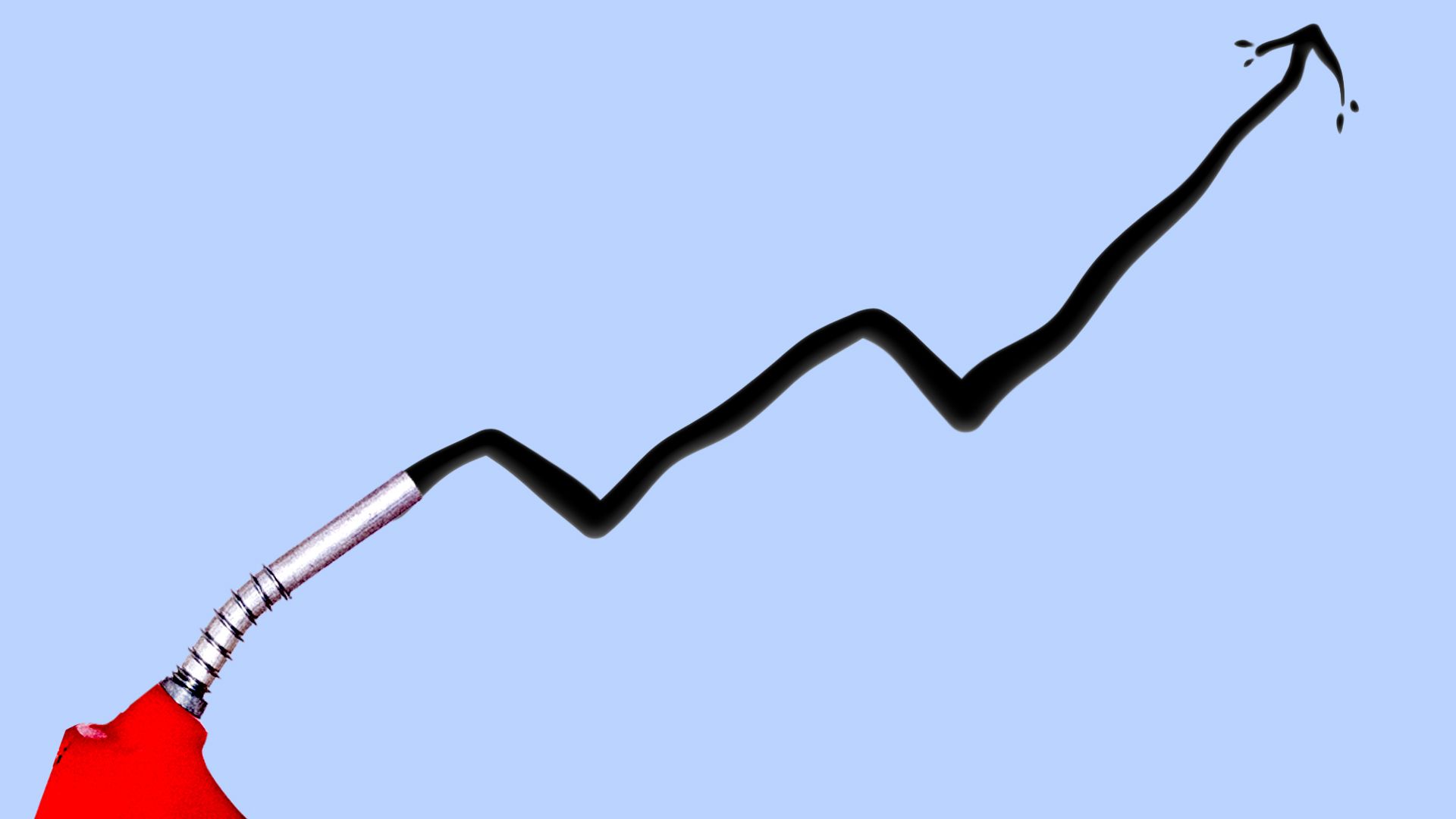 Psychology suggests you probably want to blame someone for how much it’s costing you to drive this summer.

Driving the news: At an average of almost $3 a gallon, pump prices are 60 cents higher than last Memorial Day and the highest in four years.

Economists agree that no person or action can single-handedly affect pump prices over time, which are largely driven by a global oil market. That doesn’t mean we can’t indulge in the human condition of blame:

Where you live and what you drive: It costs way more to fill up in California ($3.73 a gallon) than it does in Oklahoma ($2.71). This is due to several factors, including higher state taxes and transportation costs of moving fuel.

As for your wheels, a Toyota Prius will save you more than a Ford F-150, which has been America’s top-selling vehicle for decades.

One last fracking thing: America's oil boom of the last decade has helped keep gasoline prices lower than they otherwise likely would have been, but we are still at the whim of a volatile global oil market because we use oil at all.

Drill deeper into my full column in the Axios stream.

Breaking last night: per Bloomberg, the Canadian government could announce as soon as today that it's buying pipeline giant Kinder Morgan's Trans Mountain pipeline in order to ensure that a stalled expansion moves forward.

"A purchase would mark a stunning development for Trudeau’s government — effectively nationalizing the country’s highest-profile infrastructure project until an operator can be found," they report.

One level deeper: The Globe and Mail reports that negotiations continued late Monday and that multiple outcomes — including an extension of talks — are possible. More info is expected from a cabinet meeting this morning in Ottawa.

The big picture: The project has become one of several high-profile U.S. and Canadian fights over oil and natural gas pipelines, and the project faces opposition from the provincial government and others.

"It will be a key test of Trudeau’s bid to balance the environment and the economy by backing the C$7.4 billion ($5.7 billion) pipeline expansion while pushing a national carbon price to reduce greenhouse gas emissions," Bloomberg notes.

Why sanctions are hard and more petro-notes

Sanctions: A couple of items caught my eye . . .

The Wall Street Journal explores how Chinese and Russian companies are capitalizing as European firms back away in response to the U.S. policy.

India, meanwhile, signaled that it's not planning to end purchases of Iranian crude in response to U.S. reimposition of sanctions.

Why it matters: the stories together underscore the difficulty the White House faces in seeking to punish Iran's energy sector absent much wider international buy-in for the effort.

Estimates vary, but many analysts doubt that the amount of Iranian crude that comes off the market will approach the drop of 1.2 million barrels per day that stemmed from more multilateral efforts in the Obama era that preceded the nuclear deal.

Deals: via the New York Times, "In a sign that the American shale gas revolution is spreading to the Middle East, Saudi Aramco reached a deal with Halliburton over the weekend to lift its production program in three Saudi Arabian shale fields."

Finance: the Financial Times reports that the Royal Bank of Scotland on Tuesday became the latest big player to impose new limits on financing carbon-intensive projects.

Tesla's legacy: energy analyst Robin Mills, writing in The National, looks at the challenges facing Tesla and ponders what an implosion at Tesla would mean for the electric vehicle market more broadly.

The big picture: this brief from the big consultancy McKinsey & Co. is a helpful high-level look at some of the challenges that will accompany the growth of electric vehicles.

VW's plans: per Reuters, "Volkswagen's core brand expects to beat the company's stated target of selling 1 million electric cars by 2025, a senior manager said, citing solid demand in China and Europe, as well as untapped potential in the southern hemisphere."

One innovative idea: A piece in our expert voices section unpacks the California Public Employees' Retirement System's (CalPERS) plan to invest directly in private companies, which could enable its members to capitalize on the transition to a low-carbon economy and protect assets against climate risk.

Why it matters: Trillions of dollars in global investment in low- and zero-carbon energy is needed in coming decades to keep warming below 2 degrees Celsius. Accordingly, investors need to find pathways to profitably scale-up spending to three times current levels.

What's needed: This will demand better alignment between climate-wise investment opportunities and pension funds, whose assets make up roughly a quarter of the $100-trillion spread among the world’s major institutional investors.

Go much deeper on this in the Axios stream.

How global warming can affect learning

Why it matters: the findings on how heat lowers the "productivity of instructional time" provides new data points on the effect of higher temperatures on human welfare and performance. (The National Bureau of Economic Research circulated the paper on Monday, and it can be downloaded here.)

It's authored by experts in economics and policy from Harvard's Kennedy School of Government, the College Board and elsewhere.

What they did: the paper explores 21 million test scores from around 10 million high school kids who took the PSAT exam at least twice, and combines it with local temperature data in the year preceding the test.

The big picture: the paper adds another dimension to a thorny problem we wrote about recently — how expansion of air conditioning provides a major boost in human well-being but also could make global warming even worse thanks to increased energy demand.