At this moment 25 years ago, the soundtrack to "Above the Rim" was atop Billboard's R&B/hip-hop album charts, so a classic track is today's intro tune...

Tesla swung to a bigger-than-expected profit loss in the first quarter, while revenue came up short as well, the company said in its quarterly report released late on Wednesday.

What's happening: Axios' Courtenay Brown reports that after 2 straight quarters of profitability, the company said price cuts on the Model S and Model X contributed to its profit shortfall.

What's next: On a call with analysts, CEO Elon Musk said there is "merit to the idea of raising capital at this point." Previously, Musk had been adamant that the company would not have to raise cash.

The big picture: Tesla's stock is down just slightly in pre-market trading. But the bigger-than-expected loss is nonetheless likely to fuel concerns about the company's long-term picture.

The intrigue: Via The Wall Street Journal, "Mr. Musk added new uncertainty about where the Model Y — a compact SUV due out next year — will be made, saying he hopes to decide shortly between Tesla’s California plant and its Nevada battery factory."

2. The stakes of Ford's work with an EV startup 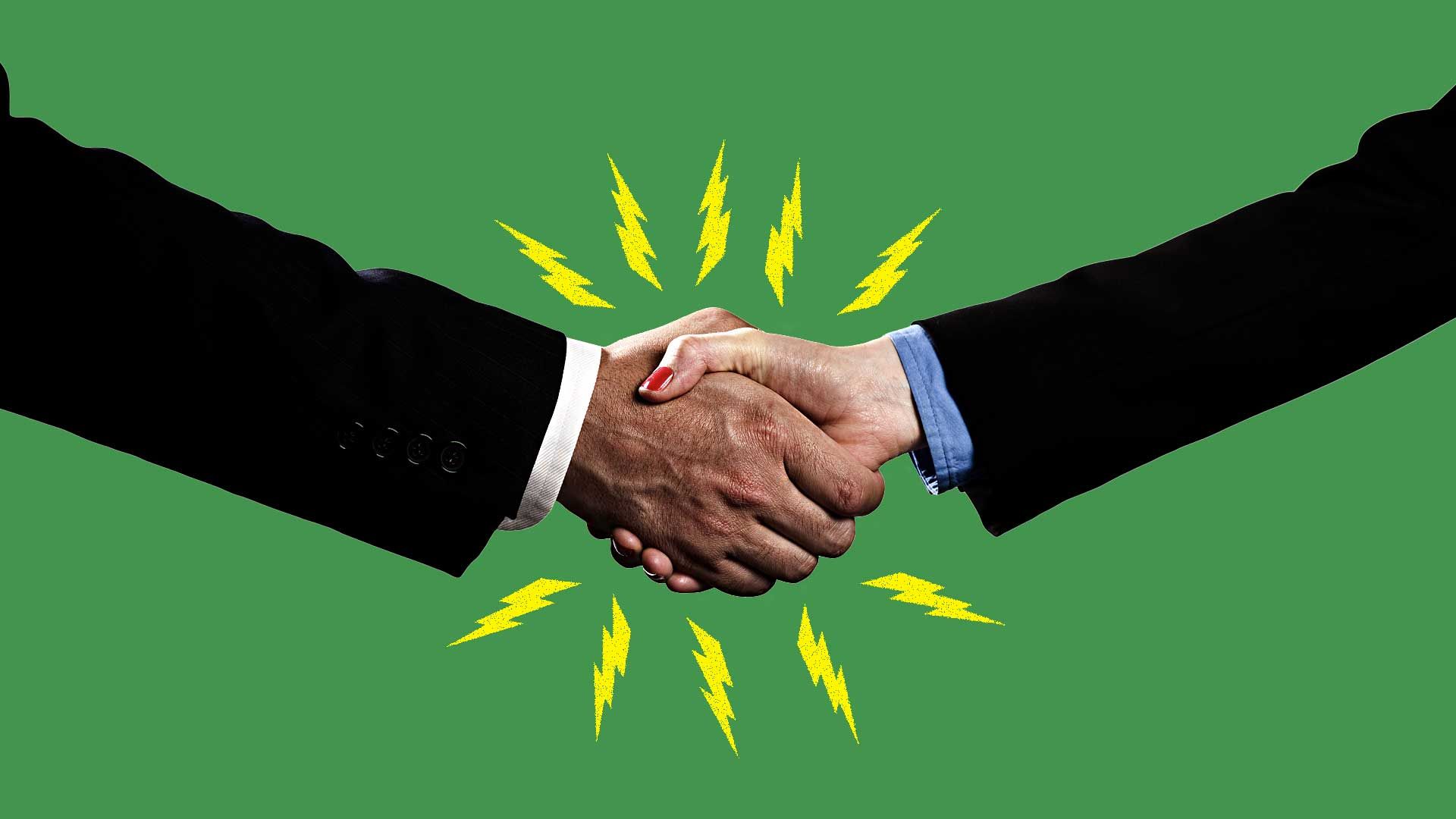 Ford's $500 million investment in EV maker Rivian is a stark sign of how legacy automakers are looking outside their walls to find competitive advantages in the emerging market.

The big picture: It's the latest in a wave of corporate partnerships and joint ventures in the auto industry as big players seek their footing, a topic we explored here.

Why it matters: The investment and collaboration deal, which comes in addition to Ford's broader $11 billion in EV-related investments planned over the next few years, could be vital to Ford's future, Morgan Stanley analysts said in a note.

What's next: In addition to Ford's equity investment, Ford and Rivian plan to develop an all-new EV of some sort (they didn't provide details) using Rivian's "skateboard" platform, which is engineered to accommodate a range of designs.

The bottom line: "In our view, if there were one global OEM who would benefit the most from the advantage of Rivian’s momentum in EVs, it’s Ford," Morgan Stanley analysts said.

Go deeper: This EV startup for adventurers has a two-part strategy for success 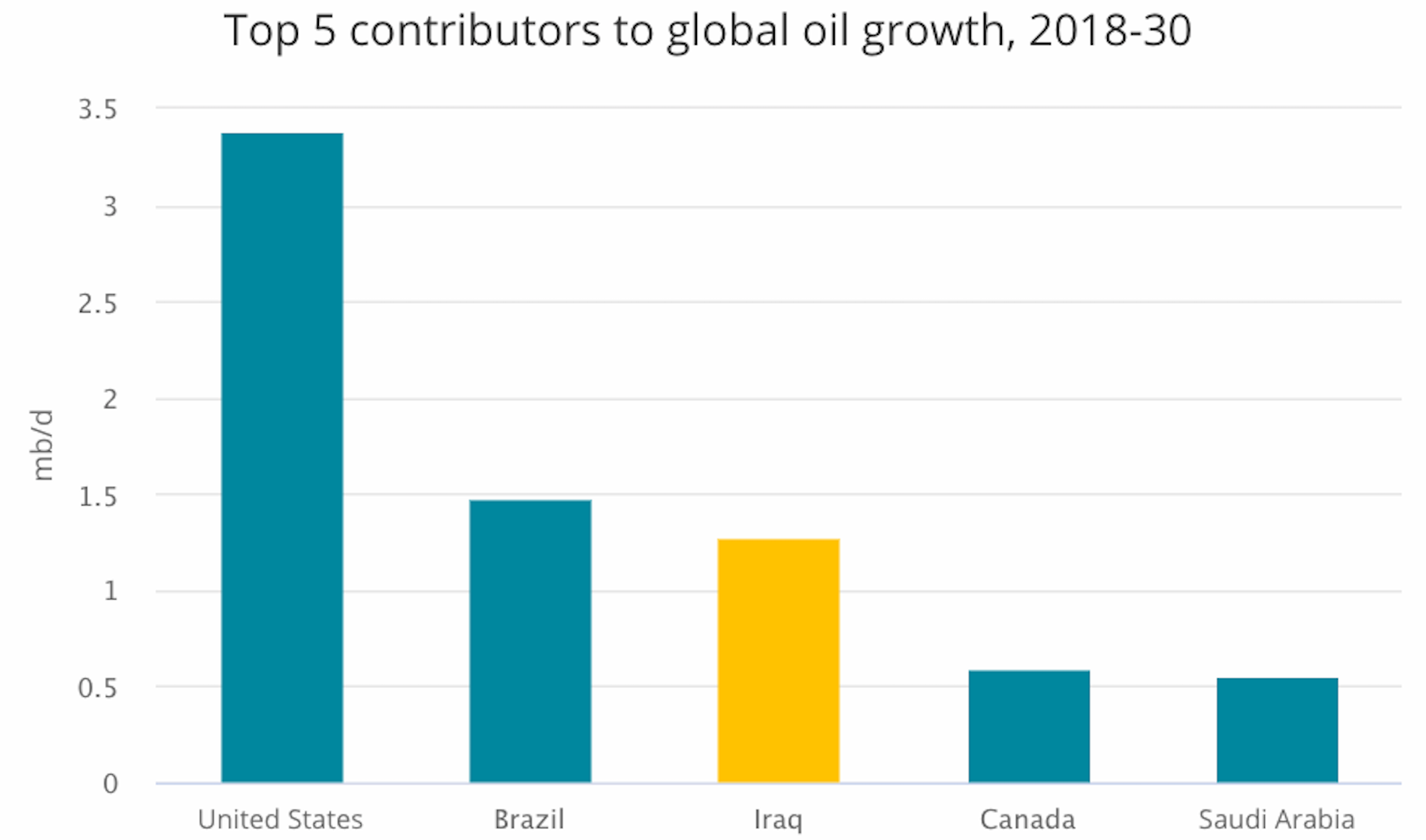 Screenshot from IEA report, "Iraq's Energy Sector: A Roadmap to a Brighter Future"

Iraq is projected to be the third-largest contributor to global oil supply growth between now and 2030, adding roughly 1.3 million barrels per day if circumstances align, according to a new International Energy Agency report.

The big picture: That potential output rise (check out the chart above) would bring Iraq's total production to almost 6 million barrels per day in 2030, making it the world's 4th-largest producer.

But, but, but: It depends on factors including sufficient water supplies for injection into reservoirs, attracting foreign capital, and a "conducive political and security environment," IEA said.

Where it stands: "Iraq’s oil sector has navigated well a very turbulent period in the last decade, managing to nearly double its output despite the war against [Islamic State] and large swings in the oil price," the report notes.

4. The war for Anadarko and more petro notes

Shale: CNBC checks in on Occidental's effort to undo Chevron's deal to buy Anadarko by submitting a higher bid. Analysts expect Chevron to prevail but the company may have to sweeten its offer, they report.

Deepwater: "Royal Dutch Shell said Wednesday that it has made a major deepwater discovery in the U.S. Gulf of Mexico, finding oil about 250 miles south of Houston in 6,200 feet of water," the Houston Chronicle reports.

Why it matters: Large-scale renewable energy systems are expensive and complex, and in some cases their manufacturers have declared bankruptcy before the end of their systems' maintenance and warranty periods.

How it works: For the purchaser, a 10-year warranty reduces the financial risk for both upfront and maintenance costs and increases confidence in the technology's performance.

Teliska is a technical specialist at Caldwell Intellectual Property Law and the CTO of Regent Power.

Axios' Orion Rummler reports ... Puerto Rico has pledged to use 100% renewable power by 2050 as the island rebuilds its grid in the wake of Hurricane Maria, according to the Puerto Rico Energy Public Policy Act signed by Gov. Ricardo Rosselló this month.

Details: The law sets pre-2050 benchmarks by requiring the island to source 40% of its electricity from renewable energy by 2025 and to stop burning coal by 2028.

But, but, but: Other forms of renewable power, like wind farms, aren't off the table.