Welcome back to Future. Thanks for subscribing. Consider inviting your friends and colleagues to sign up. And if you have any tips or thoughts on what we can do better, just hit reply to this email or shoot me a message at [email protected].

Happening in the future: Dan Primack is launching “Pro Rata” – the podcast 📷 – on Monday July 23rd. Subscribe HERE to get smarter, faster in just ten minutes on the collision of tech, business, and politics.

Russian President Vladimir Putin has been a towering figure when it comes to selling oil, acting the strong man, and breaking into other nations' electoral systems and social media.

But he has been relatively passive amid the roiling transformations with which Russia's rivals are wrestling — a future driven by robots, artificial intelligence, a mobility revolution, space travel, and other relentless tech forces.

Why it matters: With comparatively few resources, Putin has resurrected Russia as a formidable global actor, disrupting Western politics, security and order with what appears to be a low-budget, opportunistic mission of chaos.

Russia's absence from the technological race leaves its people vulnerable to the countries that win (see post below).

2. The geopolitics of being watched

For six decades, generation after generation has wondered whether George Orwell's nightmare vision has finally arrived — of an all-powerful, omnipresent state bureaucratizing truth and turning people into languid automatons.

Now, China has become a surveillance state, similar technology is available in the West, and leading thinkers say the artificial intelligence behind it is reshaping geopolitics, igniting nationalism, and changing human behavior.

In the current issue of Foreign Affairs, Nicholas Wright, a British neurologist who studies AI and politics, predicts that hopped-up surveillance will trigger a new challenge to the U.S.-led order, a system he calls "digital authoritarianism."

The battle lines are already forming: Beijing is exporting its expertise and equipment. Among recipients, Wright says, are Ethiopia, Iran, Sri Lanka, Russia, Thailand and Vietnam, Zambia, and Zimbabwe.

Low-wage workers get trapped in largely manual jobs because of the difficulty of acquiring better-paid skills, according to a new study from MIT.

Kaveh Waddell writes: Some argue that workers whose jobs become automated could learn new skills to stay employed. But the difficulty of jumping from physical work to a job that requires mainly social and cognitive skills may leave low-wage workers with no recourse when manual labor is turned over to robots.

How they figured it out: A team of MIT researchers mapped out the relative difficulty of jumping from one profession to another by first assembling a comprehensive list of job skills. From that, they developed a spatial map that arranges them by how closely they’re related to one another (see below). 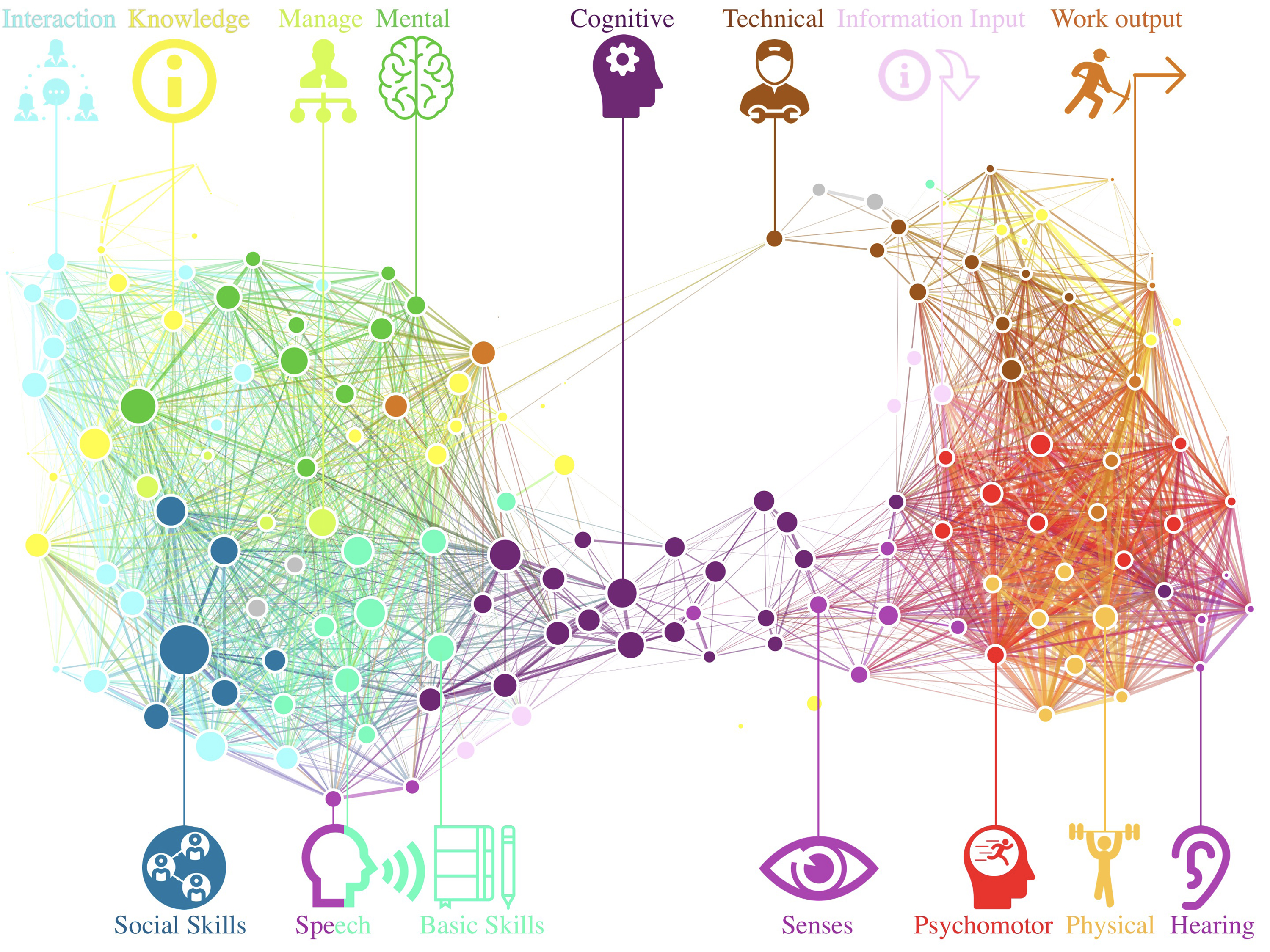 What’s next: "We will eventually get to a point where we can model the impact of a specific new technology" on a job, said Morgan Frank, an MIT Ph.D. candidate and co-author of the study.

Go deeper: When you're done playing with the results, read the MIT study in Science Advances.

The dark side of Amazon's job creation (Mike Dang - Longreads)

In praise of mini-grids for the still-unelectrified world (Economist)

We’ve sequenced the human genome and created a tool that can edit it. The final frontier: Carlsberg’s Beer Fingerprinting Project, which uses machine learning to predict a beer’s taste profile — bitter, sweet, toasty, and so on.

Kaveh writes: Brewing is chemistry, and computer-assisted analysis can help fine-tune recipes or processes that can make a lot of money for beer companies. It was only a matter of time before AI snuck into the brewery.

The details: This project from the centuries-old Danish brewer will allow it to iterate more quickly to come up with new types of beer to sell.

"It may sound nice to have to taste a lot of beers every day, but we create hundreds of small microliter brews and beers, in such small volume that they’re not really testable."

Be smart: There is no industry that won’t try shoehorning AI into its work — whether because it makes sense or because it’s the buzzword du jour.