🍷 Good Thursday morning from Charlottesville. When I flew in from our event in Dallas, I went straight to Little Star, opened on West Main this year by Ryan Collins, formerly a José Andrés chef in D.C. Sondland testified that it was also his understanding Trump was holding up $400 million in military aid, which Ukraine badly needed with an aggressive Russia on its border, in exchange for an announcement of Biden investigations.

Why he matters, per the N.Y. Times: "Sondland linked the most senior members of the Trump administration to the effort — including the vice president, the secretary of state, the acting chief of staff and others." 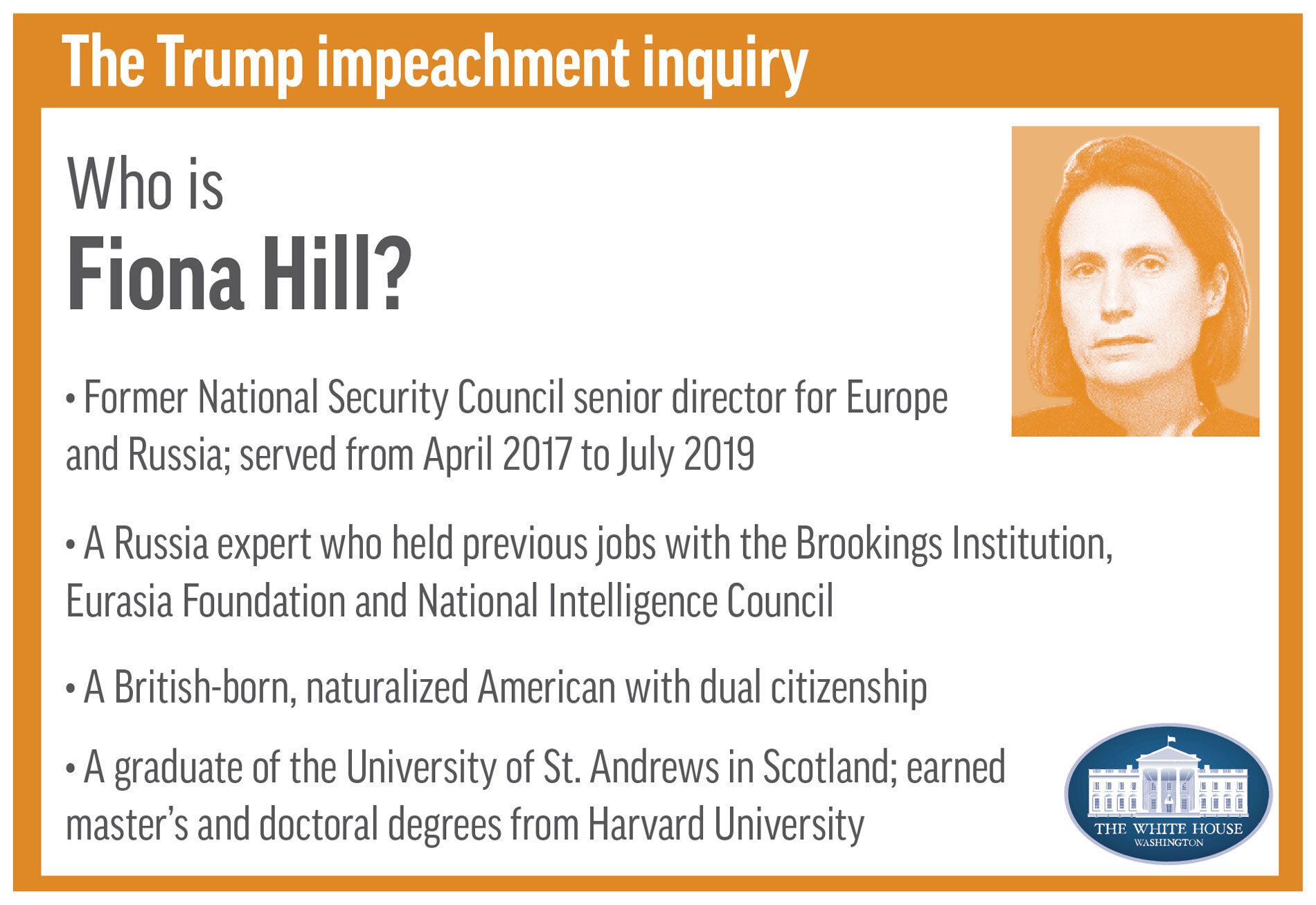 In the shadow of the day's impeachment hearings, the candidates agreed that President Trump should be impeached on a charge of abuse of power.

Five of the candidates — Warren, Sanders, Harris, Klobuchar and Cory Booker — would sit as jurors if articles of impeachment went to the Senate.

Milestone: The debate had a greater focus on women's issues than earlier ones, with questions about abortion rights, paid family leave and the cost of child care.

What to watch: Booker, the highest-profile candidate who hasn't qualified for the next debate, began his closing statement with a plea for donations to get on the December stage.

The bottom line: Biden, still atop most national polls, had gaffes (the nation needs to "keep punching at" sexual violence and harassment against women), but showed command of foreign policy.

Axios thought bubble: If you're the Trump campaign, you heart this forecast.

4. TIME's Idea of the Year: "How the elites lost their grip" 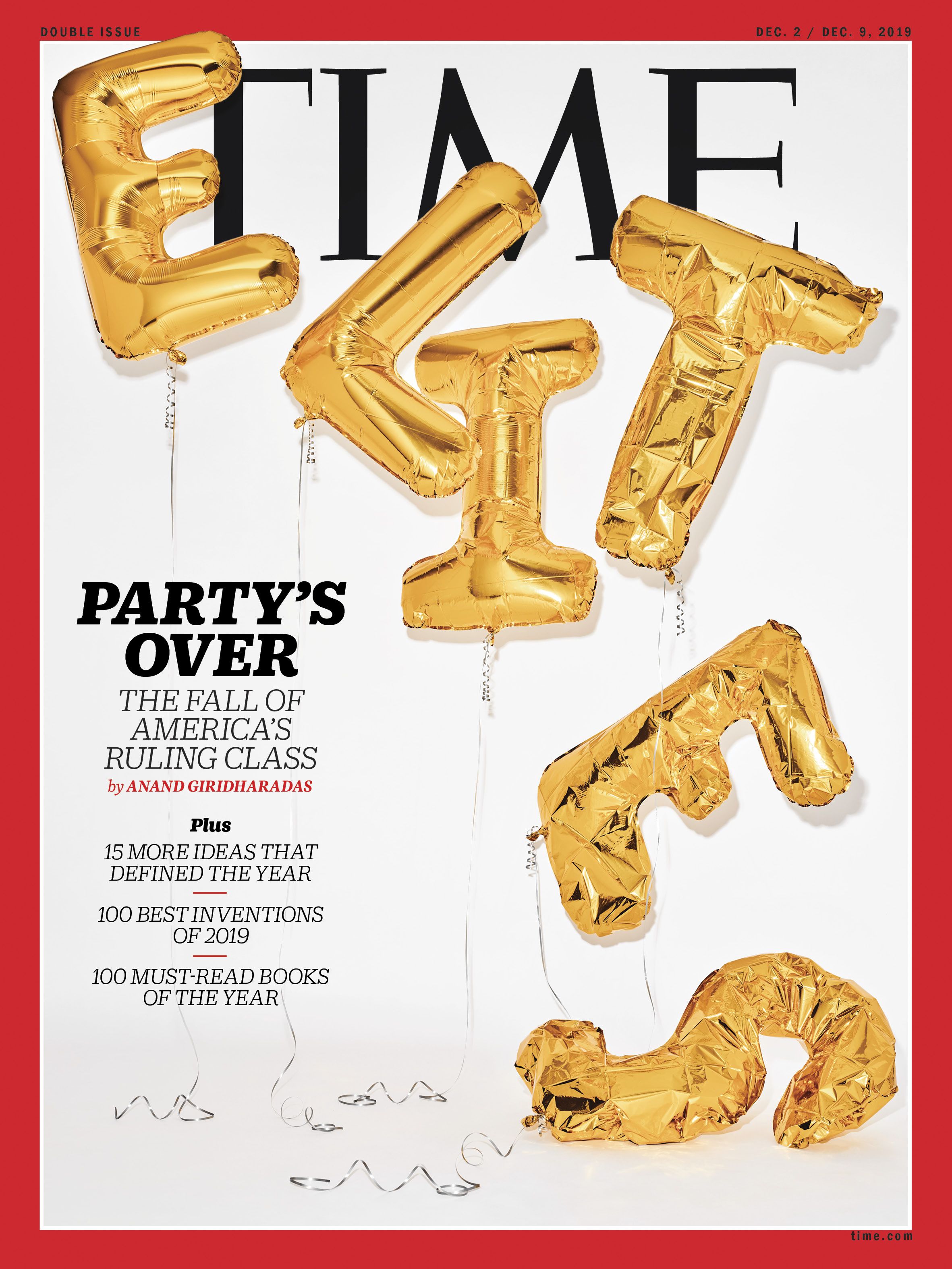 "In 2019 America's 1% behaved badly — and helped bring about a reckoning with capitalism," writes TIME editor-at-large Anand Giridharadas, author of "Winners Take All: The Elite Charade of Changing the World":

This year, America’s ultra-elites [including Jeffrey Epstein] seemed to bend over backwards to lend support to the idea that maybe the system they superintend needs gut-renovating. As a political movement challenging their wealth and power bubbled up, the elite’s own misbehavior trickled down. And where the two met, ideas that once seemed unutterable started, to many, to sound like the future. ...

The Overton window was moving [with the 2016 election]. Then came the 2018 midterms and a new wave of Democratic candidates — most prominently, Representative Alexandria Ocasio-Cortez of New York — questioning capitalism-as-capitalism in a way that seemed unfamiliar and fresh.

As the 2020 campaign approached, Warren jumped into the race, a beneficiary of the opening Sanders had helped carve for capitalist-critical aspirants to America’s highest office. ...

Warren detailed an agenda that would put American business in a headlock. That she and Sanders, both veritable enemies of Big Business, are among the top candidates shows how much the politics of capitalism has changed.

These were the contrasting headlines on MSNBC and Fox News as yesterday's impeachment hearing broke at 11:03 a.m. after explosive morning testimony: 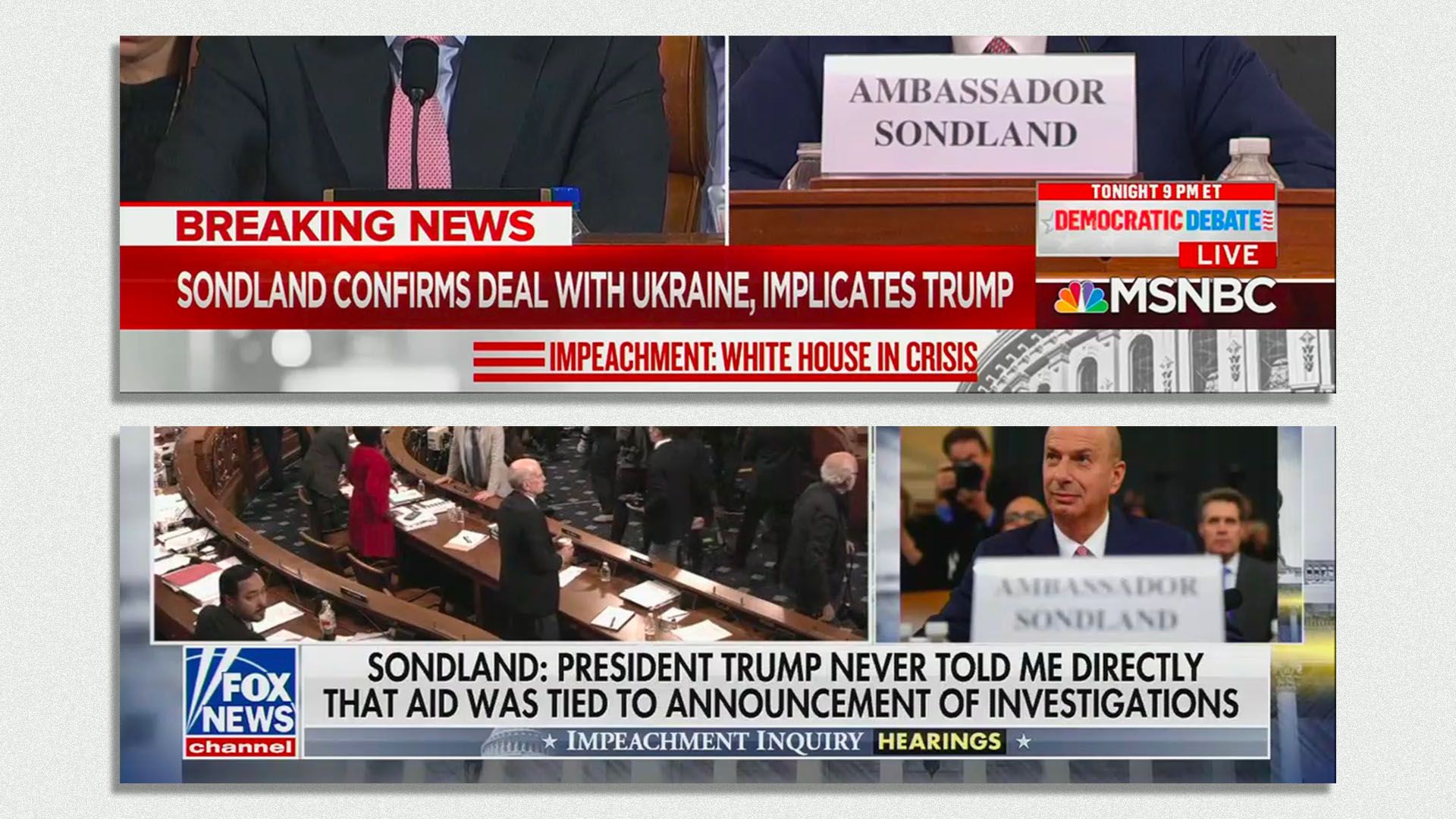 Screenshots via MSNBC and Fox News

Here's the N.Y. Times' front page for the ages: 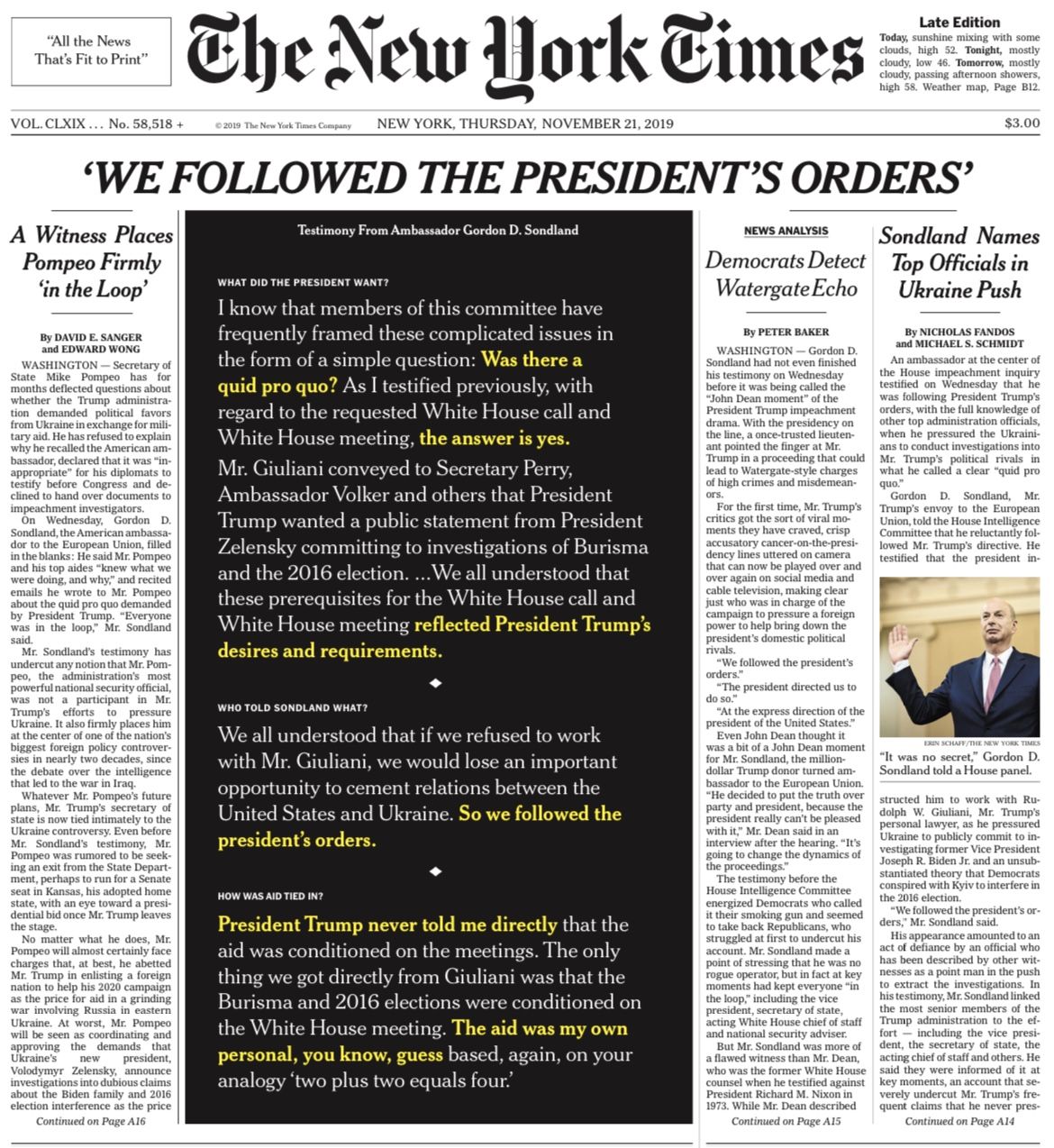 7. You saw this first in Axios PM

President Trump used these notes as he spoke to reporters on the White House South Lawn during the hearing, and held them so photographers could see: 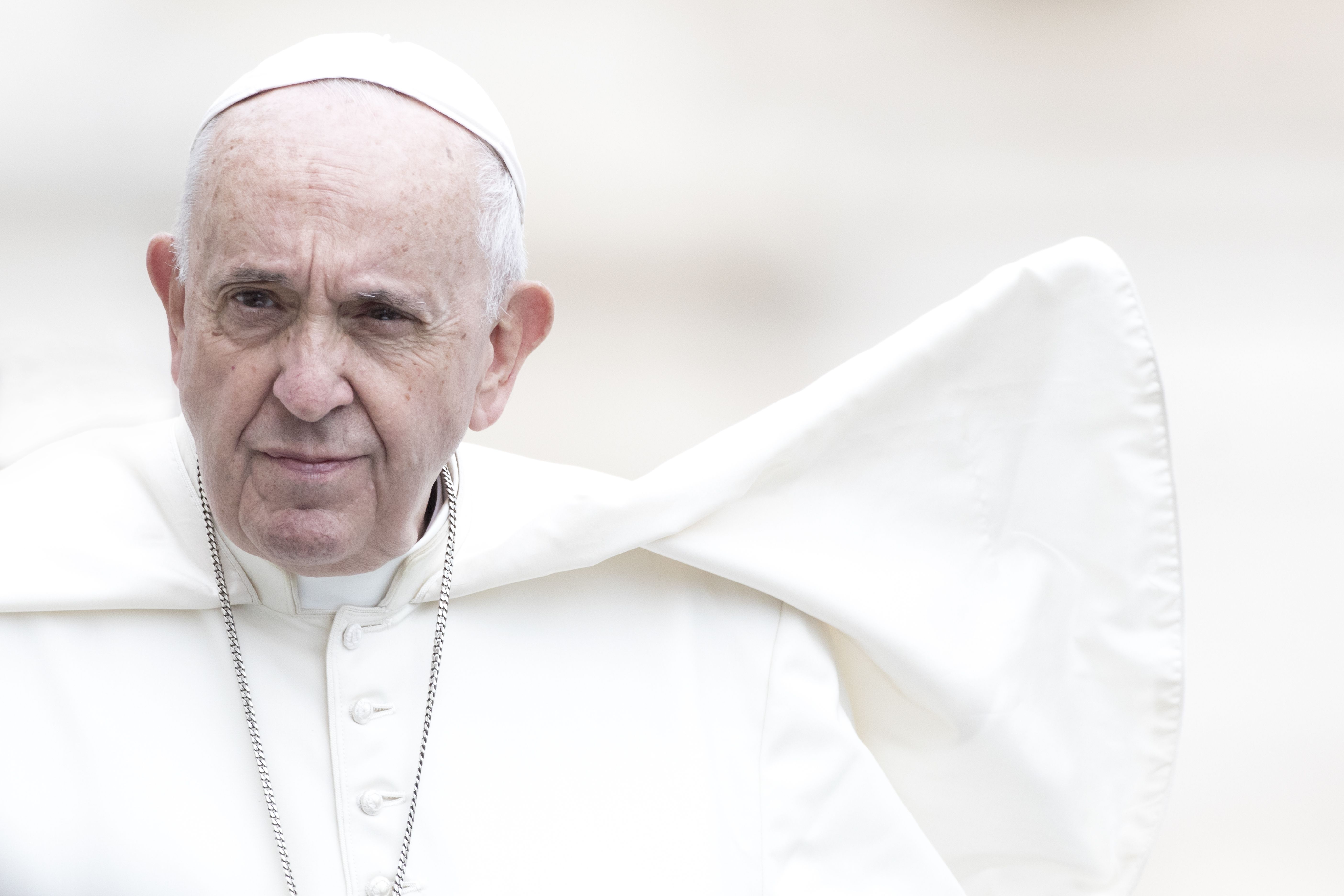 An AP investigation of Catholic mandatory review boards across the country found that they have broadly failed to uphold commitments to investigate sexual abuse allegations fairly and kindly.

The investigation found dozens of cases in which review boards rejected complaints from survivors, only to have them later validated by secular authorities.

9. One-third of us don't believe the news 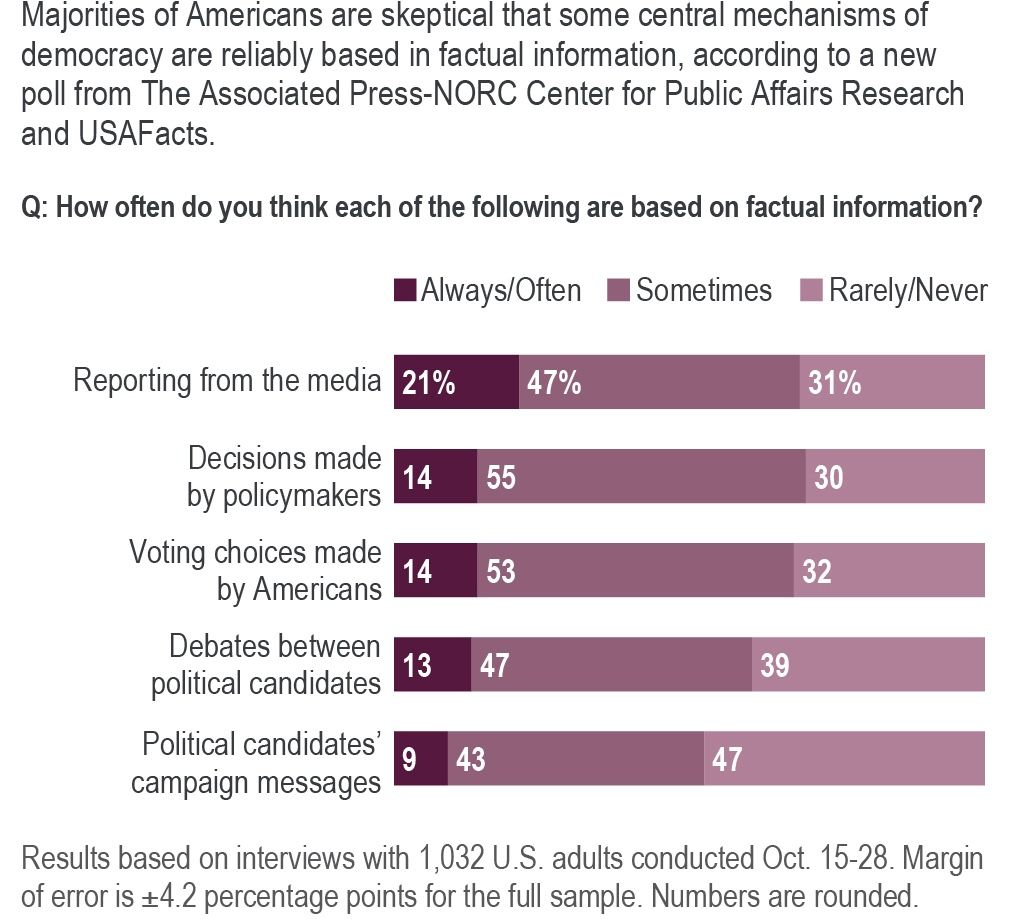